Oh, man. The last remaining Big 4 inspection report of 2013 was released by the PCAOB today and we are proud to be the first to tell you, KPMG did not come in last as the haters might have expected. For two of the 50 audits inspected, KPMG was not the primary auditor but just doing some work on them. Of all audits inspected, the PCAOB says 23 of them did not meet PCAOB standards.

We know how much you guys love to whip it out and compare, so let's take a quick peek at the scoreboard before we jump into this report:

Congratulations, KPMG, you're not the worst! But you did swap spots with PwC, which hardly improved at all.

Like its Big 4 counterparts (specifically, EY), KPMG took it hard in the AS5, with its work on 20 of the 23 "failed" issuers failing to please the PCAOB overlords. Other problem areas include Auditing Standard No. 13 and AU Section 342.

From the 63 page report: 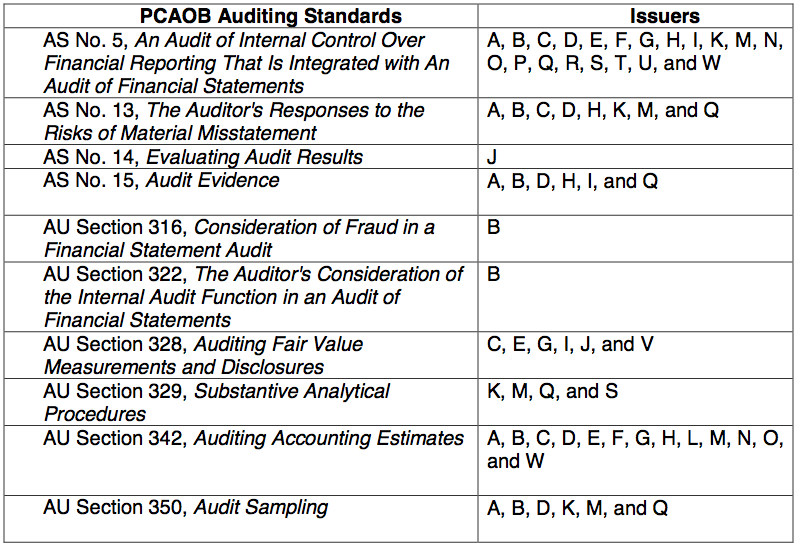 Poor Issuers A and B. They should ask for a refund on audit fees.

Remember the PCAOB only recently added language into reports regarding the term "audit failure" and what you should take that to mean:

Whether or not associated with a disclosed financial reporting misstatement, an auditor's failure to obtain the reasonable assurance that the auditor is required to obtain is a serious matter. It is a failure to accomplish the essential purpose of the audit, and it means that, based on the audit work performed, the audit opinion should not have been issued.

In other words, 23 audit opinions of 50 inspected should not have been issued. Yet KPMG went ahead and did it anyway because meh, close enough. However, the PCAOB does note:

[I]nclusion in an inspection report does not mean that the deficiency remained unaddressed after the inspection team brought it to the firm's attention. Depending upon the circumstances, compliance with PCAOB standards may require the firm to perform additional audit procedures, or to inform a client of the need for changes to its financial statements or reporting on internal control, or to take steps to prevent reliance on its previously expressed audit opinions.

What's interesting about KPMG's report in particular is that its worst performance was on Issuer A (obviously) and KPMG was not even the primary auditor for that client. The client's principal auditor engaged KPMG "to audit the financial statements and ICFR of a component of the issuer, excluding certain centrally coordinated areas, to support the principal auditor's opinions on the consolidated financial statements and ICFR of the issuer." So it's deliciously hilarious that KPMG completely blew the very thing they were hired by the primary auditor to do.

KPMG has established a culture built on an absolute commitment to performing consistently high-quality audits. We share the PCAOB's objectives of continually improving audit quality, building confidence in the auditing profession and meeting our responsibilities to investors and other participants in the capital markets system. We believe that the PCAOB's inspection process serves to assist us in identifying areas where we can continue to improve our performance and strengthen our system of audit quality control. We remain committed to full cooperation with the PCAOB, appreciate the professionalism and commitment of the PCAOB staff and value the important role the PCAOB plays in improving audit quality.

In other words, we promise to do better next time, guys.

Ed. note: an earlier version of this article used male pronouns based on the information available at the time. We have been informed the associate was female, confirmed this information with the NYPD, and have updated pronouns in this article. I debated even posting this at all but everyone is already talking about it and […]

KPMG Vice Chair Greg Engel has been having trouble sleeping lately. It isn’t climate change or social justice or the price of eggs keeping him up at night, like most accounting leaders he is consumed by the talent shortage. No really, that’s what he told CFO Dive. Not to worry, Engel has hope. Hope that […]