Gonzaga University is relevant for about ten days a year or so. I suppose since the new Pope is Jesuit that might change things, but I doubt it. I have nothing personal against the University or the people that go there; one of my favorite people from my hometown went to law school there and he turned out pretty good. But the excitement around Gonzaga during the month of March is as overblown as James Deen on any given day.

So when the Moss Adams' Spokane office found out that Bulldogs Center Kelly Olynyk was an accounting major, OF COURSE that got people excited. So excited in fact that they figured dressing up like him yesterday was a good idea:

"We found out at some point Kelly Olynyk's an accounting major, actually has an accounting degree at Gonzaga, and we started throwing around this idea that maybe if we dressed up like him, he'd come work for us," said Marshall Bratton of Moss Adams LLP.
The whole office is dressing up Tuesday – wigs, jerseys, and all – and the best-dressed employee wins $100.   The managing partner of the firm is a die-hard basketball fan, and helped co-found Hoopfest, the largest 3-on-3 basketball tournament in the country.

This should surprise precisely no one. And yes, there is a picture: 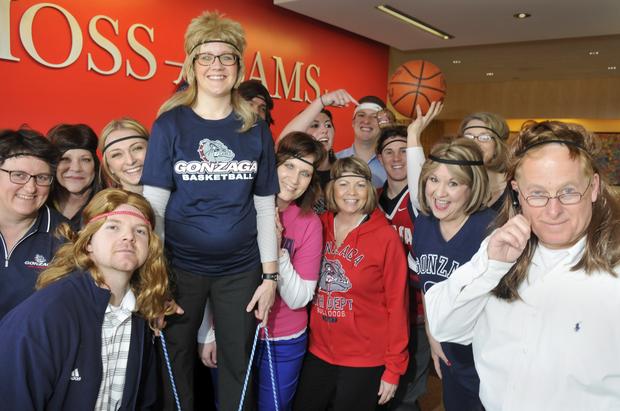 Olynyk is seven feet tall, which is being demonstrated by Mrs. Joe Dirt. The die-hard basketball fan is Rick Betts, who is on the bottom right and seems to be enjoying a return to his hippie days. No word on whether he's allowing everyone to blow off work to set up a watch-party in the office conference rooms tomorrow afternoon.

As for the $100 first prize, hopefully the winner has the sense to read Nate Silver before filling out their bracket.

Getting laid off sucks. It has happened to me twice in the past 23 years. I’ve also been fired once for poor performance, but unlike the two times I was laid off, I knew exactly when I was being fired. I hated my job, I hated my boss (I was her only employee and she […]