This is the average salary for an accountant in 2021 based on an analysis by AdvisorSmith of accounting salaries, number of accounting jobs, and the cost of living from 363 U.S. cities. That salary is up about 2% from 2019’s average accountant salary of $77,920.

Based on that glut of data, AdvisorSmith came up with the 50 best cities for accounting professionals to pursue their careers. Also, the website revealed its top 10 small, medium-, and large-sized cities for accountants in the country.

The No. 1 bestest city for accountants is … the accounting hotbed of Parkersburg, WV, which came in second in 2019’s ranking. According to the analysis, Parkersburg accountants earned an average salary of $80,740, and the city had a cost of living that was 16% below the national average. The city also hosted 70% more accounting jobs than the average city.

The best midsize and large cities for accountants were Midland, TX, and Birmingham, AL, respectively. In the overall top 50, Midland came in second (ranked fifth in 2019) and Birmingham came in fourth (ranked eighth two years ago).

According to AdvsiorSmith, Midland’s 1,490 accounting jobs is 54% higher per capita than the average American city. In addition, accounting professionals in Midland earn an above-average salary of $86,880.

Salaries for accountants in Birmingham average $76,800, while the cost of living is 9% below the national average.

You can look at the overall top 50 in its entirety here, but in the meantime here’s a infographic of the top 10 best cities for accountants in the small, medium, and large categories: 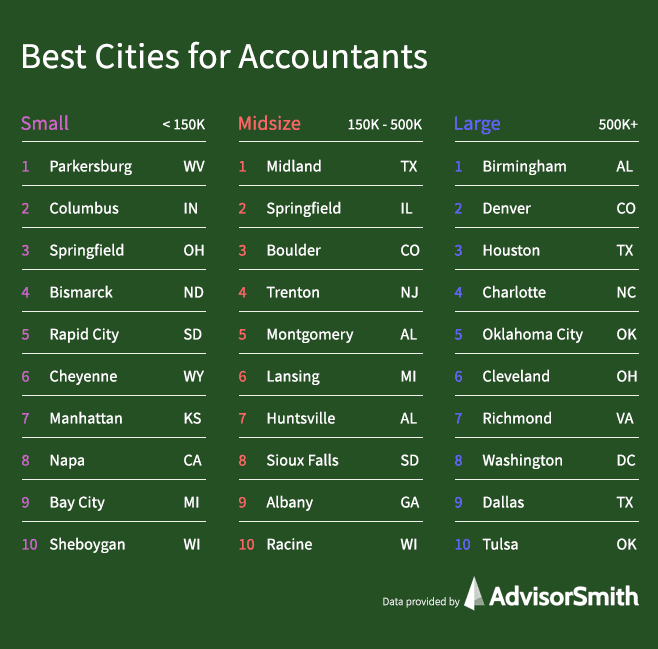 Best Cities to Find a Job and Raise Your Little Accountants
Compensation Watch ’19: Highest-Paying Cities Don’t Give Accountants the Most Bang for Their Buck

Deloitte Australia is trying to be transparent by releasing salary data but apparently this tactic isn’t working, not with Daily Mail writing headlines like Young Aussie reveals why many millennials no longer want to work in corporate jobs – after boomers said the generation was ‘lazy and entitled’ that is. Here’s the TikTok that inspired […]