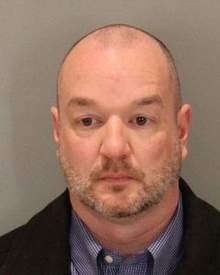 Omaha accountant, Clarence "Fred" Weber appears to have a problem. First off, he was sending sexts to a 14 year-old and 13 year-old girl, "request[ing] naked photos of the girls, […] pictures of the girls partially clothed, [and] others centered on sexual activities." This, obviously, is disturbing, illegal, and completely unacceptable but secondly good God, 3,000 text messages a month to two people?

Weber, 43, has been charged with two counts of enticing a child with an electronic device. Weber exchanged about 2,000 messages with a 14-year-old girl and more than 1,000 texts with a 13-year-old, prosecutors say. […] There were an additional 70 emails between Weber and the older girl in which he asked if she had revealed their relationship to parents or school officials, according to a search warrant for Weber's electronic devices. In the messages, Weber allegedly indicated that he could reveal the girl's alcohol or sexual history to her parents. Weber's business title in the signature tag line was attached to some of the emails, according to court documents.

So, if this guy is your accountant, feel free to relieve him of his services for depravity, incompetence or both. But mostly depravity.
3,000 sexts in 1 month led to charges [OWH]

While we continue to wonder which hat the IRS is going to magically pull 87,000 new agents out of, more stories are coming out about just how tight things are at our nation’s tax collector. Like this recent NBC News article: Will Kohler, who works as a tax examiner at the IRS office in Cincinnati, […]