Please ensure Javascript is enabled for purposes of website accessibility
Latest
If You Let 23-Year-Olds Sign Off on Audits, You’re Gonna Have a Bad Time Which Firm Had the Most IPO Audit Clients In Q4 2022? Berdon Got a Lot of Dates But Ultimately Chose to Hook Up With Citrin Cooperman Accountants Are the Referees of Business, Says Guy Who Would Know Turns Out Cohen & Company Auditors Are Human After All 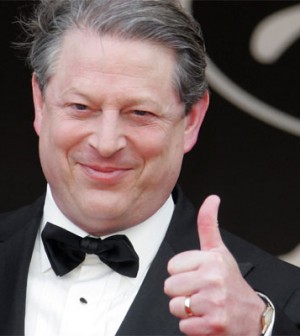 Former Vice President Al Gore recently became a very wealthy man (well, wealthier). Good for him, right? This is America after all, where the rich are important and the important are rich and if you're neither then, well, you're probably not working hard enough.

Anyway, if you're wondering how Vice Prince Albert made his fortune, Bloomberg has some details:

[Gore] made an estimated $100 million in a single month. In January, the Current TV network, which he helped to start in 2004, was sold to Qatari-owned Al Jazeera Satellite Network for about $500 million. After debt, he grossed an estimated $70 million for his 20 percent stake, according to people familiar with the transaction. Two weeks later, Gore exercised options, at $7.48 a share, on 59,000 shares of Apple Inc. stock that he’d been granted for serving on the Cupertino, California-based company’s board since 2003. On paper, it was about a $30 million payday based on the company’s share price on the day he claimed the options. […] Gore isn’t finished exercising his Apple stock grants. Those 59,000 are part of 101,358 Apple options and shares of restricted stock Gore has amassed, according to company filings, giving his total holdings a gross value of more than $45.6 million today.

The 'Berg puts Gore's wealth at somewhere north of $200 million — nearly double of what the New York Times reported last August –which puts him in the company of another failed Presidential candidate:

That’s close to the $250 million net worth of 2012 Republican presidential nominee Mitt Romney, whom President Barack Obama and Democrats targeted in ads and speeches as being out of touch with most Americans.

Now that Al is in Mitt's range, he could probably use an upgrade in his estate and tax planning services. And Willard seems pretty happy with his team, even if the security of a nearby facility is questionable.

Gore Is Romney-Rich With $200 Million After Bush Defeat [Bloomberg]