[Updated on Dec. 14 with additional information.]

Heard through the grapevine recently that a third round of job cuts happened at Deloitte Canada in October. A source told us:

They did it on a rolling basis in the entire month across service lines. They probably did this in advance of the new hires starting in November.

I suspect there there will be more layoffs since the CEO and business line leaders keep emphasizing that they will not only grow the top line but also profitably … that can only mean more cost cutting. This is a joke because there were no year-end discussions or raises, not even inflation unless you were one of the very few who got promoted.

According to the source, Deloitte Canada got rid of approximately 2% to 3% staff across service lines in October.

In 2009 they did 3 rounds of layoffs of that amount. They will probably do another round in early 2021 because as the CEO says, “he wants to grow, profitably” and since top line isn’t growing, cuts have to be done to create profits.

Also, people are still asked to volunteer work reduction. They didn’t make an announcement of layoffs in October because obviously it would look terrible, so many took pay cuts and they still did layoffs.

Back in the spring when the coronavirus was beginning to rampage throughout Canada, Deloitte management strongly encouraged employees to voluntarily reduce their work hours and take a corresponding cut in pay in order to save jobs. And many Deloitters did, for the sake of their co-workers, and the firm still axed about 3% to 4% of its workforce in May.

And since then there have been two additional waves of layoffs at Big D, sources have told us—one in late July and one in October.

If you were affected by the job cuts at Deloitte Canada in October or if you have any additional information you can share with us, please text us at (202) 505-8885 or email [email protected]. All tips are anonymous.

[Updated on July 23 with additional information.]

We heard from two sources on July 22 that more layoffs had occurred at Deloitte Canada, this time affecting nearly 200 people in non-client-facing roles.

One source told us:

CEO said its because we’re falling behind our competitors and the Covid-19 market is not going to see recovery until 2022. It’s to maintain aspirations for growth for 2023.

Bad times at Big D north of the border. I know Deloitters haven’t been in the office for several months but what’s morale been like lately? Has it been demoralizing knowing that so many of your colleagues have been let go? Are you worried about more layoffs?

Wishing all those affected by this latest round of layoffs well.

[Updated on June 26 with additional information.]

It’s been almost two months since the Great Deloitte Canada Layoff of 2020, which was followed by layoffs of 5,000-plus people and 700 people at Deloitte U.S. and Deloitte Australia, respectively—all the while Deloitte’s tone-deaf global CEO is tweeting about how Deloitte is helping its people thrive through the pandemic.

But I digress. We got a tip today from a Deloitte Canada source who claims to know exactly how many people were separated from the Canadian Green Dot in early May. At the time, we heard that between 300 and 400 people were let go. But according to this person, it was a lot more:

But that’s not all. A couple of other things allegedly went down at Deloitte Canada recently:

Many Deloitters took up the firm’s offer to voluntarily reduce their work hours, while being paid a bonus stipend, until the end of September to try to save as many of their colleagues’ jobs as possible. Now that the voluntary work hour reduction arrangement is apparently being extended, it made me wonder if a second wave of layoffs is around the corner.

When I asked this person what they thought, (s)he said:

No knowledge of their plans but one assumes a second wave is likely. They expanded very quickly and made a bunch of acquisitions that aren’t looking so hot right now.

I’d also expect more partner cuts. If 500 staff are out you’d think about 50-100 partners would also need to go to keep the pyramid from getting top heavy.

If anyone else can confirm what this person said about the partner layoffs and the continued voluntary work hour reductions, let us know using the contact information at the bottom of this article.

[Updated on May 7 with additional information.]

I don’t know if anyone else caught this comment that was left on the site Wednesday afternoon but it looks like shit is going down at Deloitte Canada:

Is this really happening in D-town? We haven’t heard about this from anyone else, so as of now this remains a big fat unconfirmed rumor. But after KPMG Canada laid off a slew of Klynveldians in late March, we heard from a lot of people, some of whom were victims of the bloodletting, about all the bad stuff that had happened in Toronto, Vancouver, and other Canadian offices.

[UPDATE:] So from what we’ve been told by several people this morning, there definitely were layoffs that happened at Deloitte Canada yesterday, and we’ve also heard that there might be more before the end of the week.

We haven’t been able to confirm that 400 Green Dotters were let go; however, we’ve been told by a few people that an estimated 3% to 4% of Deloitte Canada’s workforce, across all service lines, lost their jobs. And it does sound like consulting took the brunt of the hit.

Based on numbers we’ve been told by sources today, the breakdown we have of layoffs by practice are:

Of course that number is likely to go higher if there are more job cuts on Friday.

One source told us today that employees in Deloitte’s audit and assurance practice received an email that 94 people will be laid off today and tomorrow. Another source who worked in Ontario and was let go by the firm yesterday told us that the firm “trimmed 29 people in tax and legal alone yesterday, with notice that the cuts were happening at 10 a.m. yesterday, and being complete by 5 p.m.”

We were told by one Deloitter who was not impacted by the job cuts that the internal communication for layoffs “was very stupid.”

They said some people would get fired in the next couple of days, so we didn’t know whether people were already communicated or if we could be one of them and we just didn’t know yet.

The person who worked in Ontario said the Canadian firm leader said in a video that the reasoning for the layoffs was “COVID-19/tough times etc., a lot of business jargon about response to the current economic crisis.”

As the individual who left the comment on our site yesterday mentioned, Deloitte had strongly encouraged people to voluntarily reduce their work hours and take a corresponding cut in pay. One source told us the reduced pay options were 20%, 35%, or 50% time reductions, “with a bigger bonus stipend for those who take the more drastic options.”

A source told us that there was “lots of pressure to take the voluntary reduced hours in the past weeks (deadline is passed already), sometimes with meetings every day.” 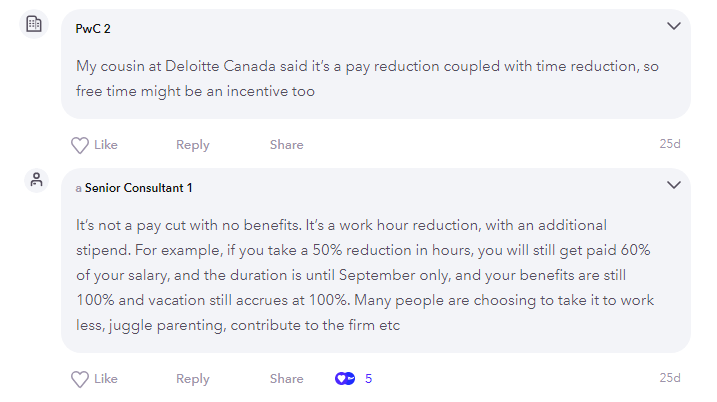 Another Deloitte employee posted on Fishbowl a month ago that “so far about 3,000 have enrolled [in the voluntary work hour reduction arrangement], expecting it to hit about 5,000 by next week. That’d be about 45% of the entire Deloitte workforce in Canada and Chile.”

What I forgot to mention earlier is that Deloitte Chile falls under Deloitte Canada’s umbrella.

Anyhoo, there’s some speculation that Deloitters who didn’t volunteer to cut their hours and pay were shortlisted for layoffs. The person who worked in Ontario said they didn’t take the work hour reduction arrangement option because “our team was busy and they needed me working full time.”

But another source told us:

I want the world to know that this is happening in audit practice at Deloitte, even when some employees already opted for the voluntary reduced work arrangements.

If you have more you can tell us about what is happening at Deloitte Canada, email or text us using the contact information below.