Last but not least, we conclude our review of the Big 4 firms’ 2019-20 audit quality inspection reports from the U.K.’s Financial Reporting Council with the Shemp Howard of the group—KPMG.

KPMG made headlines (not in a good way, natch) in June 2018 when the FRC said the firm’s five-year decline in audit quality was “unacceptable,” after finding that half of the 16 FTSE 350 audits done by the House of Klynveld in 2017-18 were either completely botched or sorta botched. So the FRC decided to inspect 25% more KPMG audits of FTSE 350 companies in the 2018-19 financial year.

When the Big 4 firms’ 2018-19 inspection reports came out in June 2019, the FRC revealed that KPMG only required improvements on four of the 20 FTSE 350 audits inspected, with zero audits needing significant improvements.

Has KPMG U.K. finally turned a corner and gotten better at audit quality? LOL! Not really.

We reviewed a sample of 18 individual audits this year and assessed only 11 (61%) of them as requiring no more than limited improvements. Of the twelve FTSE 350 audits we reviewed this year, we assessed only seven (58%) as achieving this standard. …

We have highlighted in this report aspects of firm-wide procedures which should be improved, including strengthening the culture of challenge within the firm’s audit process. In our previous inspection cycle KPMG was placed under “increased scrutiny” and during this year’s inspection we continued to monitor whether the firm’s Audit Quality Transformation Plan was sufficient to achieve the necessary improvements in audit quality. In addition, the FRC commissioned an independent review of the firm’s audit practice that covered key aspects of leadership and governance, risk management, values and behaviours. We requested that KPMG develop an action plan in response to the recommendations raised, which has now, along with the Audit Quality Transformation Plan, been incorporated into the quality pillar of the firm’s three-year Audit Strategy.

We have seen considerable focus on audit quality at the top of the firm and there have been a number of improvements to the audit practice as a result. However, our inspection results show that high audit quality is not being achieved consistently and this report identifies key areas where the firm must make improvements more quickly. The overall inspection results therefore remain unsatisfactory and we expect the firm to take specific action to address this.

Not exactly a ringing endorsement of KPMG’s audit quality, but at least the FRC used the term “unsatisfactory” and not “unacceptable” to describe it.

Seven out of 18 KPMG audits (38.9%) inspected by the FRC required improvements, the worst percentage among the Big 4 firms. But none of the seven required “significant” improvements, while Deloitte, PwC, and EY all had at least one audit with significant errors. So that’s something, I guess.

In addition, KPMG fell short of reaching the target set by the FRC a few years ago, that at least 90% of FTSE 350 audits should be “good or requiring no more than limited improvements.” 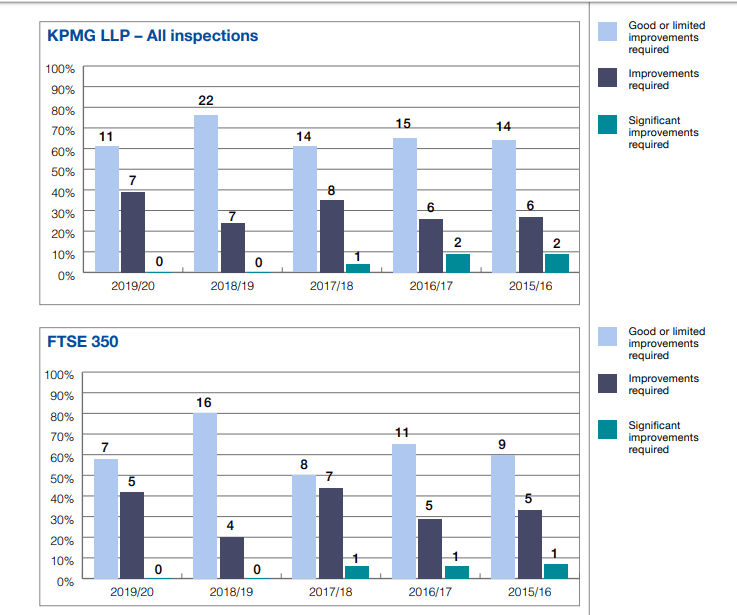 KPMG needs to show improvements in the following areas, according to the FRC:

With the Final Four Horsemen of the Accounting Firm Apocalypse now out of the way, we’ll take a look later this week at how BDO and Grant Thornton fared in their respective FRC audit quality inspection reports.

Deloitte Sucked the Least In Latest Batch of U.K. Audit Quality Inspection Reports
PwC U.K.’s Auditing Report Card Gets a Grade of U for Unsatisfactory
EY U.K. Got Slightly Worse at Auditing This Year, According to Latest FRC Inspection Report