This is why your firm advises against hooking up with a fellow accountant.

This morning, we learned that two accountants dating is really tough, especially if one of said accountants is a severe cheap ass.

Our tipster tells us that she went on a birthday trip with her boyfriend and found herself on the receiving end of a spreadsheet organizing the expenses racked up during said trip. Jeez, my expense sheets aren't even this complicated when I go to Boston for work! 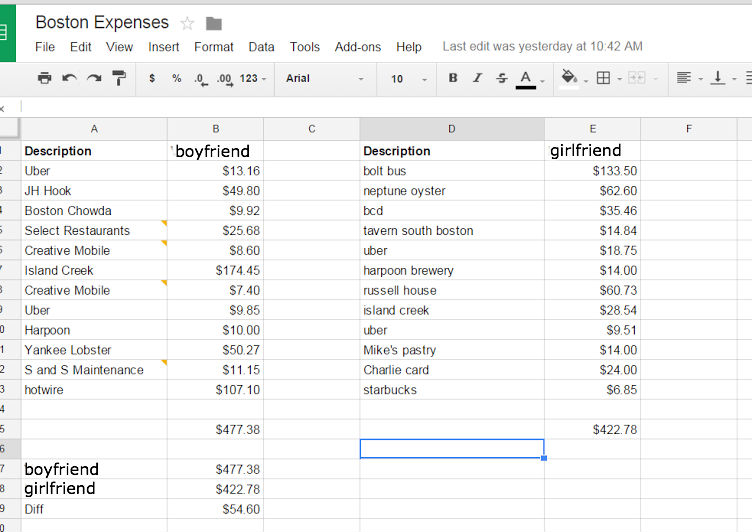 We understand that the two lovebirds met as Big 4 interns a few years back and clearly things have worked out beautifully. In a spreadsheet, no less. We have so many questions. Like how did you guys get away with paying just $10 and $14 at Harpoon, respectively? What kind of pastries did you get at this shady Mike's place? What is the boyfriend's drink at Starbucks and does he hoard Sugar in the Raw packets into his pockets?

Girlfriend tells us she kind of knew from the start this was going to be a pain but since she's an accountant herself, bickering over a couple dollars is really NBD:

When we started planning the trip, we agreed that we would split the costs (since this was technically our Christmas presents to each other). There was no formal agreement on how we would split said costs. But he's been known to keep a tally on things he pays for and send me venmo requests, or suggest I pick up dinner to even out the movie tickets he's paid for. Throughout the weekend we would switch off paying for certain things, and he said we'll settle up after the weekend. He picked up the big tab at Island Creek, which I was assuming was his treat for my birthday dinner. However, Monday morning I received an invitation to a google sheet with his Boston expenses on there and instructions to fill out mine. Since he was so adamant about settling up at the end, I made a list on my phone of all the things I had paid for. I paid for several things with cash so obviously there wasn't a paper trail. Mike's pastry was one of the places I paid for with cash. After I filled out my expenses on the google doc, he g-chatted me. I put down $14 for Mike's pastry since all I could remember was paying for it with a $20 and getting at least a $5 back.

Here's an exclusive peek into the alleged gchat in which our starcrossed lovers work out their expenses:

[Boyfriend]:
lol i dont care about a few dollars
but oyu do know mikes pastry was 10.50
[Girlfriend]:
okay change it, I was just thinking I paid cash and thought about the change I got back
I got a $5
and then $1 or $1s
couldn't remember
but that's fine
I owe you 57.50 instead
starbucks also didn't charge for one of the things we bought
because I got a dopio espresso, you got the green coffee drink
and we got a water
russell house $50 and I tipped 20%
which is why it's $60
if your transactions are still pending then you can change them in a few days
also, we could throw in the like $4 for tips to the guy for calling us a cab
and for getting us our bags
if we're getting picky about a few dollars…
is the excel sheet okay with you or do you want to see my bank statements?

Why am I walking away from this feeling like I really need to know what this Mike's pastry place is all about?

We look forward to the day these two are married in the courthouse on December 31st for $150 each (marriage licenses aren't cheap, after all).