Please ensure Javascript is enabled for purposes of website accessibility
Latest
Unable to Bill For It (Yet), PwC Australia Tells Staff They Can’t Use ChatGPT For Client Work Monday Morning Accounting News Brief: Auditor Demand; EYer Not Coming in on Monday; Reentering the Workforce | 2.6.23 Friday Footnotes: Know Your Value; Retired EY Partners Complain; ‘Rest For Success’ | 2.3.23 If You Let 23-Year-Olds Sign Off on Audits, You’re Gonna Have a Bad Time Which Firm Had the Most IPO Audit Clients In Q4 2022? 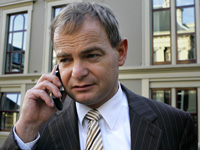 Back in November the IASB came up with the idea to start a new cool club called the Accounting Standards Advisory Forum. It was going to include 12 elite members of accounting rule wonkery that would be at the forefront of global financial reporting. There was one major to joining the ASAF, however, and that was that the dozen members would have to "sign up to promoting a single set of global standards – code for no lobbying for national carve-outs – and respect the IASB's independence."

The "single set of global standards" was commonly understood to be IFRS, but after hearing from interested parties that weren't necessarily hip to the idea, the IASB had a change of heart about that position, explaining that all the dozen members had to do was "agree to support and contribute to the foundation in its mission to develop a single set of high-quality, understandable, enforceable and globally accepted financial reporting standards." Standards that were, presumably, to be named later. "New IFRS" or IFRS Zero" or something.

But now, here we are, about three weeks later and the IASB has gone full on desperate, handing the U.S. a seat on the new ASAF:

IASB Chairman Hans Hoogervorst said on Monday membership rules will be changed by the time the new panel holds its first meeting in April so the world's biggest capital market can join. Michel Prada, chairman of the IASB's trustees, who will select panel members, said: "We very much hope our U.S. friends will join. We obviously need their contribution."

Oh? No more of this "It is also becoming more difficult to justify the representation of jurisdictions not applying IFRS in the IASB governance framework" talk?

"Now we are in a sort of situation people are waiting and wondering what's next," Prada said. "The message we have to convey to our U.S. counterparts is that they have to help us get out of this situation and find a new way forward."

While the PCAOB has been on a mission to scare the pants off of auditors everywhere in the past year with record fines and scary speeches, the Financial Accounting Standards Board took a much more chill approach to 2022. A Thomson Reuters piece published last week informs us that FASB ended the year having issued […]

I’ve spent a good portion of my career monitoring the accounting and auditing standard-setting world and Big 4 firms. So, I read with great interest the letter to the editor to Going Concern on whether the Big 4’s equity, diversity, and inclusion (EDI) efforts are corporate BS. It made me think about the FASB and […]