Latest
Friday Footnotes: Deloitte Sued; RSM Sued; PwC Not Sued But Incompetent | 10.15.21 How Is #TaxTwitter Holding Up Before the Oct. 15 Deadline? Someone at EY Had an Axe That Needed Grinding On Their Way Out the Door [UPDATED] PwC Australia Diversity and Inclusion Manager Who Mocked Chinese Accents Had to Be Told You Aren’t Supposed to Mock Chinese Accents A Big 4 Firm Being Untruthful? You Don’t Say!

Ed. note: this is third in an ongoing series to help you make the most out of Excel setting-by-setting. If you have a specific Excel demon to slay, you can get in touch for our resident white knight and Excel-slayer David Ringstrom to help you out.

If you’ve implemented the changes that I’ve recommended in Part 1 and Part 2 of this series then you’ve probably gained some efficiency in Excel. Today I’m going to focus on those niggling green triangles that are about as welcome in a spreadsheet as bedbugs in a luxury hotel room. Part 1 of the series shows how to get to the Excel Options dialog box in your version of Excel, and once you’re there, look for the Formulas section in Excel 2007 and later, or the Error Checking Tab in Excel 2003 and earlier (psst, hey, you Excel 2003 users, you do realize your software is obsolete now, right?).

The green tick marks that appear in in a spreadsheet are supposed to signify when Excel thinks you’ve made an error. The problem is many innocuous entries in a spreadsheet trigger false positives, such as when you force Excel to not drop the leading zeros from an account number, Social Security number, or a New England ZIP code. In such cases users often add a single quote before the number, as shown in Figure 1 to preserve the leading zero. Of course, doing so in turn triggers the green tick mark. 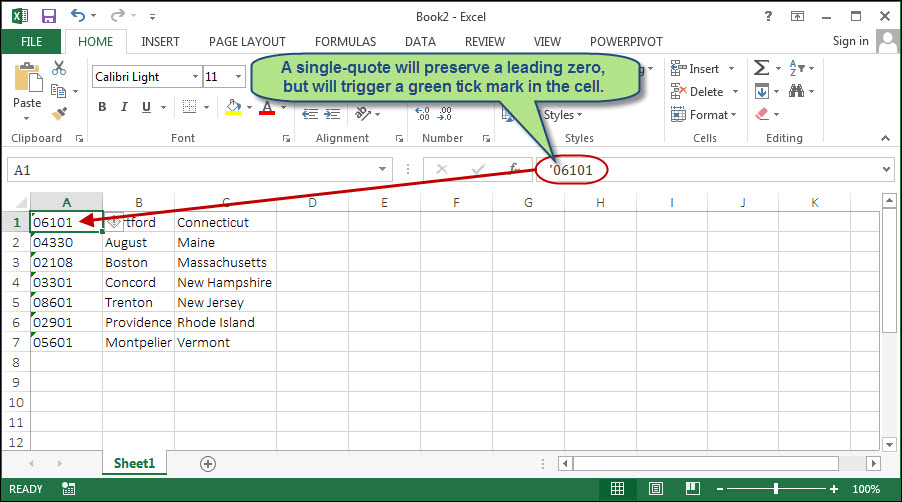 Figure 1: Adding a single quote before a number to preserve leading zeros triggers a green tick mark by default.

When said tick marks appear, you have several options: 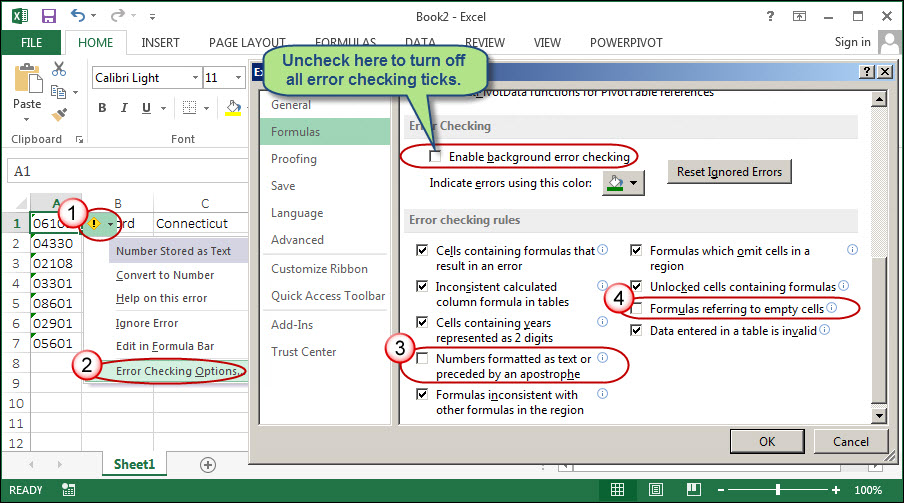 Obviously the first option requires no further explanation, so I’ll move on to the second item. As shown in Figure 2 above, an exclamation mark icon appears, which you can access in two ways:

Once the menu appears, you’ll be presented with several options:

The Nuclear Option: Clear the checkbox for Enable Background Error-Checking and you won’t see those green tick marks ever again— that is until you install Excel on a new computer.

The Nuanced Option: Clear the checkboxes adjacent to the rules that trigger the most false-positives in your spreadsheets. For me it’s the Numbers Formatted as Text or Preceded By An Apostrophe, as well as Formulas Referring to Empty Cells. In Excel, as in life, sometimes solving one problem often causes another. In any case, I’ve found that finessing the rules can turn the tide on the error markers, so that when they do appear onscreen I actually pay attention instead of tuning them out.

In previous posts, we’ve talked about how Intuit can help you thrive in the remote work era and shape your accounting career your way. By empowering you with an AI-driven, intuitive platform, Intuit can also help you be more productive and provide a higher level of service to customers as you advance your career.  Intuit […]

How Is #TaxTwitter Holding Up Before the Oct. 15 Deadline?