So, not only did fans of democracy have a successful protest in Hong Kong yesterday but the Big 4 — who felt compelled to take out an ad warning against assembly — were totally wrong about downtown festivities clogging up the center of business!

OK, first of all, July 1st was a local holiday. So they weren't even supposed to be at work! Plus, markets were closed. CLOSED. As the Big 4 Hong Kong democracy haters wrote in their ad Friday:

Central Hong Kong is considered as the central business district where majority of transactions take place. It is also where many multi-national enterprises, local enterprises, securities exchanges, financial and professional service firms are headquartered. In our opinion, if Central, Hong Kong, was taken over, various businesses including banks, securities exchanges, and stock market will be affected. In addition, it will cause delays to all types of business transactions. Furthermore, monitoring agencies might not be able to continue normal operations which leads to the instability of the market environment. The negative social and economic impact will be beyond measure.

Uh, yeah, about that. Estimates range from 100,000 to as many as half a million people showing up and guess what? NOTHING BAD HAPPENED. In fact, the opposite happened.

Markets typically dislike mass protests; they portend instability. But though nearly 100,000 Hong Kong residents (according to police; half a million according to the organizers) thronged the streets of the island territory to call for electoral reform yesterday, the stock market—which was closed on July 1 because it was a local holiday—reacted with aplomb today: 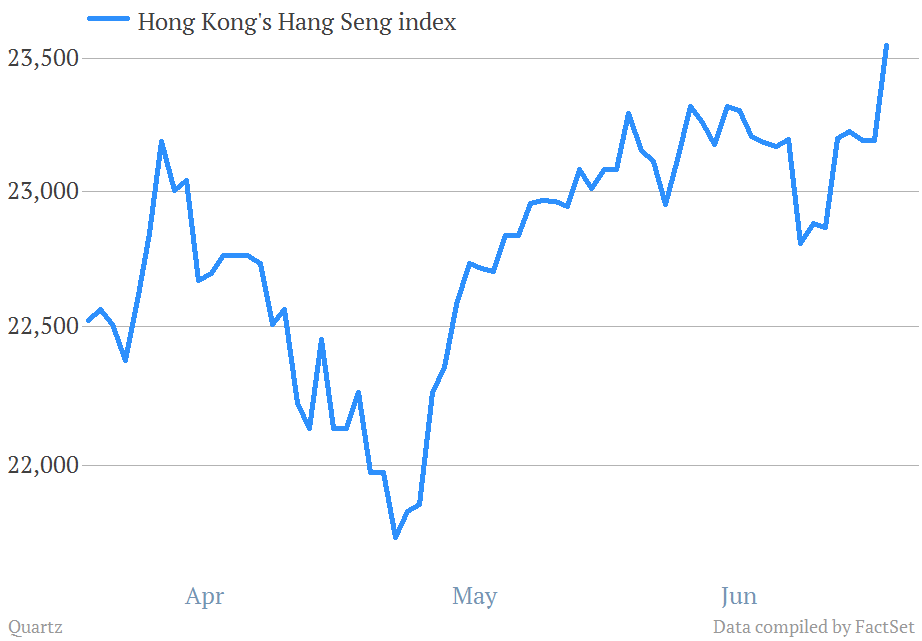 So what did the Big 4 get for their efforts to silence human rights? A slap on the hand from Amnesty International. Says Economia:

Amnesty International’s Hong Kong director, Mabel Au, levied heavy criticism at the Big Four and accused them of acting in “bad faith” for criticising the rights of peaceful protest and freedom of expression.

Au said, “The firms would be wise to remember that the right to freedom of expression and the right to peaceful assembly go hand in hand with the rule of law in Hong Kong.

“Business considerations do not take precedence over human rights.

“The accountancy firms must ensure that they do not contribute in any way to human rights violations or attacks on peaceful protesters."

Now, if they would have just kept quiet and told everyone to work from home, there'd be no issue.

Only 500 people were arrested and as far as we can tell, the business world did not end as we know it. SO THERE. Hopefully this teaches them that while you can suffocate your own employees' dreams until they are pale, sun-starved shells of the human beings they once were, you cannot silence the pursuit of freedom.

Fortune has come out with their 100 Best Large Workplaces for Women list and while no accounting firms made the top ten, Deloitte managed to claw their way up to #16 from #51 in 2021 thus making them the highest-ranked Big 4 firm on the list. To determine the Best Workplaces for Women, Fortune research […]