Latest
Being Home During Lockdown Shifted Accountants’ Priorities, Says Lady Network Security Experts Found a Way Into Moss Adams’ Cloud Network EY Throws a Fit When Your Job Circumstances Change KPMG’s New Metaverse Space is Like the First-Person Shooters You Played in 1999 But Worse The IRS Is Paying an Unwelcome Visit to Alliantgroup (NEW UPDATE) Experts Weigh In On Feds’ Raid of the ‘Blue A’

The following is a guest post about Big 4 Battle of the Bands by Krupo, who spent three times as many years training as a pianist than as a Chartered Accountant. Krupo writes at A Counting School and enjoys photography, making pithy observations and being Canadian.

The Kool Haus is one of Toronto’s best concert venues. Garbage, Muse, Prodigy and countless other bands have hit the stage.

Incongruously enough, so have bands of professional accountants. Swapping an audit room for the green room of the Kool Haus automatically becomes a Top Highlight of any sojourn through AuditLand. With varying degrees of preparation, the Big Four sent bands to perform in 2011 for the first show. PwC went up last, and urged on by a mob of eager staff accountants waving PwC fuchsia glowsticks, they took home the crown.

You can’t stop a good thing, so the 2012 show returned. Proving that the smartest thing you can do is copy a well prepared working paper and just renaming it for your own client, KPMG bought a crate of blue glowsticks for their people, and EY did the same with yellow. Deloitte was asleep at the glowing switch, though a pair of green balloons bouncing around the crowd did their pale imitation of the famous Green Dot.

Last year EY and PwC fielded the 2nd and 1st place finishers, so they returned with the same bands, the “Going Concerns” (no relation to this blog), and “Bill’s Choice “(name-dropping to the PwC Canada CEO, Bill McFarland), while KPMG and Deloitte went back to the drawing board.

Deloitte ran a “League of Rock” throughout 2011, and repeated that exercise in 2012, which included live performances at various smaller Toronto venues with a winning band crowned to carry the flag for the Green Dot. Deloitte’s contenders, D’Luxe, opened the show, and picked an excellent opening song, “Lonely Boy” by the Black Keys. The trouble with playing a cover (and, maybe not surprisingly, all the songs in a Battle of the Bands are covers) is that people know what the song “should” sound like. You can put your own spin on it, but it better sound good. Sadly, they butchered the song.

They played some decent old school Chicago blues afterwards, but the mulched up taste from the opening travesty couldn’t be salvaged. It was also painful to watch the lead singer try and start a call and response with an audience that could hardly be heard in response. Sometimes you need to cut your losses and move on.

I don’t know what KPMG did to vet their chosen band, but they ended up fielding a group called “Write-offs.” You know the biggest fear the band Garbage had when they first released an album in the 90s? It was that there would be a one-word review of their music: “Indeed.”

Let’s leave the Write-offs at that.

PwC came on strong, egged on by its fans chanting “Pee-Double-You-Cee”. A strong show was expected, especially considering that PwC was loudly trumpeting its position as “defending champion,” and members of the other bands expressed respect and awe at PwC from what they saw in the early afternoon soundchecks/warm-ups.

Bill’s Choice didn’t disappoint, opened with "The Pretender," by the Foo Fighters, and rocked it hard. They also did a decent cover of "California Gurls." Well, if Snoop could do it at Osheaga, I guess they could do it here too. They took a daring chance by covering Gotye’s “Somebody I Used to Know.” After all, this song hit it huge earlier this year, to the point where its covers and parodies were almost more popular than the original. There’s always a huge risk with taking a song that’s been recently played to death and then putting your own spin on it.

The crowd repaid the gamble, cheering on the band for the cover, though anyone paying attention to the music would discount the quality of the vocalist’s singing with the heavy-handed instrumentals accompanying her. I don’t care if you think you’re being ‘creative’ in your interpretation, some pieces of music don’t work if you use an incompatible style. "Somebody I Used to Know” is best known for its delicate instrumentation, contrasting with the anguished vocals. By introducing harsh thumping beats you change the feel of the song from snarky break-up to that of a ponderous funeral dirge. Whatever points you score for originality get cancelled out by the poor musicality that results.

While the remaining songs in the Bill’s Choice set came out well, including Nirvana’s “Smells Like Teen Spirit” and a classic callback to Journey, the band wasn’t really moving around and thrashing up a storm the way you’d expect to see full-fledged rock stars to behave.

Winning a drawing of straws, the Going Concerns got the coveted closing slot. It’s a double-edged sword playing last. On the one hand, the crowd is warmed up and psyched to see you. On the other hand, fans of the first few bands may melt away towards the bar or even the office to finish some working papers. And for novice performers, the stress from waiting another couple of hours can undo the weak-willed.

The Going Concerns benefited from the wait, coming on stage hyped up and ready to rock. They set a theme early on by starting off with the Summer theme from Vivaldi’s Four Seasons, and then immediately mashed it up with AC/DC’s "Thunderstruck." Adding to the effect, the three women singing for EY started the show covered up with black cowled robes, only to tantalizing rip them off as the band shifted from Vivaldi to AC/DC. While the lead guitarist trolled the crowd with a little Gangnam style dance, the ladies then moved on to "Beat It."

With the crowd properly primed, some obnoxious “Ernst! And! Young!” cheering kicked in to drown out some drunken douchebaggery from a PwC staff who was trying to yell “Pee-Double-You-Cee” from his spot stage-right. As each band was limited to a thirty minute set, the band leader and bassist rallied the band to cut short the nonsensical chant-a-long with the crowd, and the Going Concerns continued with an invitation to start dancing, performing "Moves Like Jagger." Again, this was another Gotye gamble, playing a song that has been played to death, but the crowd ate it up and the musicianship was spot on. This followed with some classic Bon Jovi, "You Give Love a Bad Name," balancing out the appeal to the Millennials with a song that would steer more nostalgia for the partners in the room – as well as the older roster of judges observing the performance.

If covering Maroon 5 or Gotye sounded risky, the final move of the night sounded downright insane. The Going Concerns started to play the same Journey song, "Don’t Stop Believing," that Bill’s Choice had played. There’s actually planning involved to ensure bands don’t play the same song others had done. Did someone screw up?

Not quite. Within moments of the first few verses, the tone shifted.

Mash-ups are nothing new to the jaded crowds of the Internets, and the band members later mentioned their inspiration came from “Don’t Stop the Sandman.” What was different was the inclusion of a novel tribute cover in a band’s line-up, and one of such difficulty, given the dramatic shifts in mood and key that were achieved with flawless precision. The Going Concerns had already signaled their intentions with their Vivaldi-AC/DC introduction but this kicked things up a notch.

Interestingly enough, given the dual references, a member of Journey was actually one of the judges in the 2011 battle. A member of the often-mistaken-for-Journey-by-Chartered-Accountants 80s power trio Triumph came on stage to judge the first contender, EY’s Going Concerns. He was unusually harsh for a judge at a charity Battle of the Bands. An enduring point of pride for the protective and fiercely loyal EY crowd was that they booed a member of Journey Triumph off the stage, much to the host’s shock and everyone else’s bemusement. Shaken by the encounter, he was not brought up on stage to judge any of the following three bands, leaving that in the hands of the other three celebrities in attendance.

This time around two proper musicians were on stage, namely Mike Siracusa and Mike Turner. Rounding out the quartet were the United Way’s Julia Gorman and businessman/aspiring politician John Tory. Tory is quite the character. Here’s the 30-second explanation for anyone outside Ontario or Canada: Tory can be loosely compared to Michael Bloomberg. Only imagine an alternate realty version of Bloomberg that went from being a big-time businessman to unsuccessfully running for both Mayor of New York and Governor of New York State in consecutive elections, and afterwards became an AM talk radio host instead.

The judges offered pithy commentary after every band, with Tory coming up with cute revised acronym for each of the bands based on their companies’ names (KPMG being “Kickass something something”). Tory tried to make a pun about the word Earnest and Ernst after he was teased for not coming up with a cute acronym for EY. Mike Turner had something more interesting to say, quipping that the whole “tease with Journey than switch to Metallica thing is sooooo overdone.” He fooled the EY crowd, which was ready to rush the judge’s table with their USB calculators and little Duck white-out shivs, only to be called off by the host who pointed out that Turner was kidding. Turner went on to laud the band for doing something potentially disastrous – jumping from a song in an E Major key, then into e minor, then back to E Major, and then REPEATING this several times further without screwing it up.

A good half hour or so after the music had ended, the four prizes were awarded in reverse order, with three consolation prizes leading up the grand prize: Best Overall and the Big 4 Battle of the Bands trophy went to the Going Concerns, scoring a triumph for originality and balls-to-the-wall showmanship.

On the following pages are few pictures from the event courtesy Natalie Coombs. 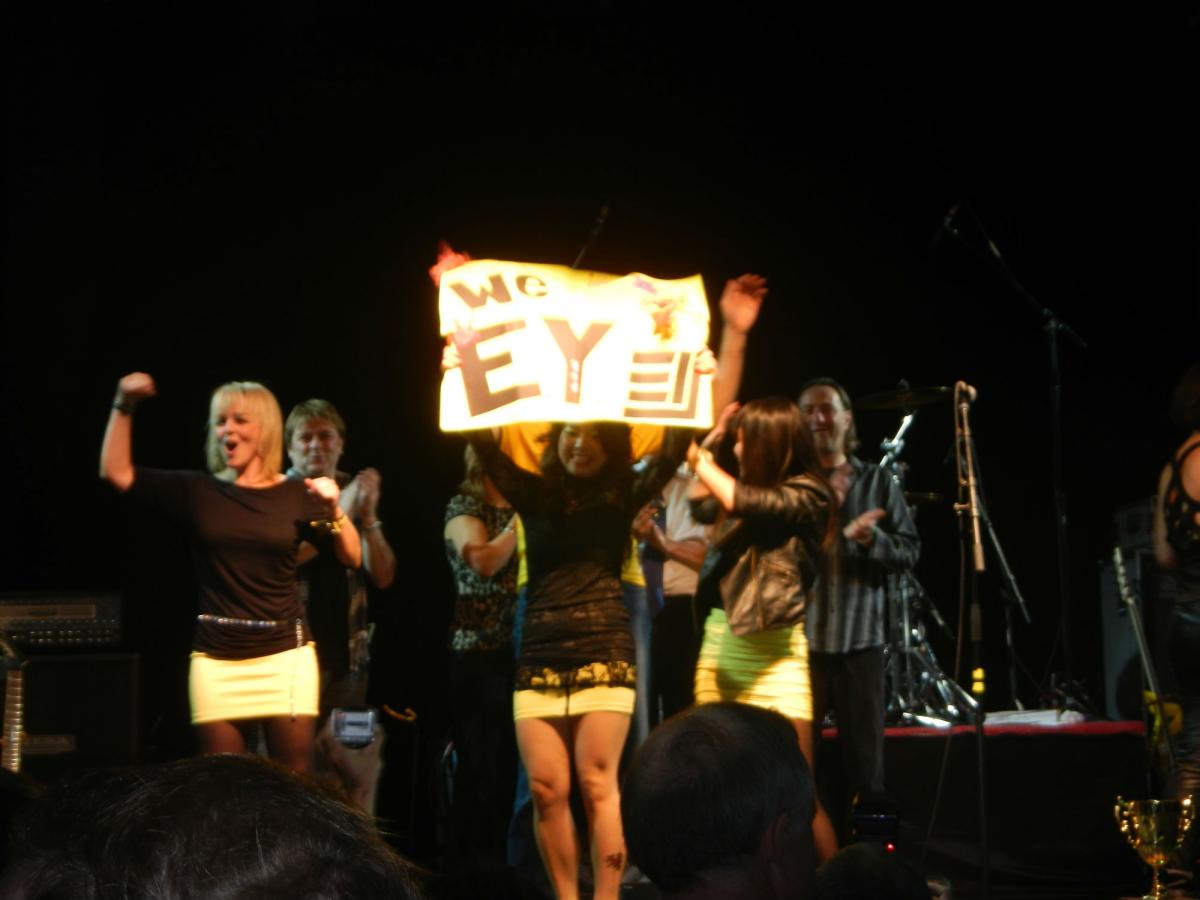 The victors fist pumping and sporting a homemade sign. 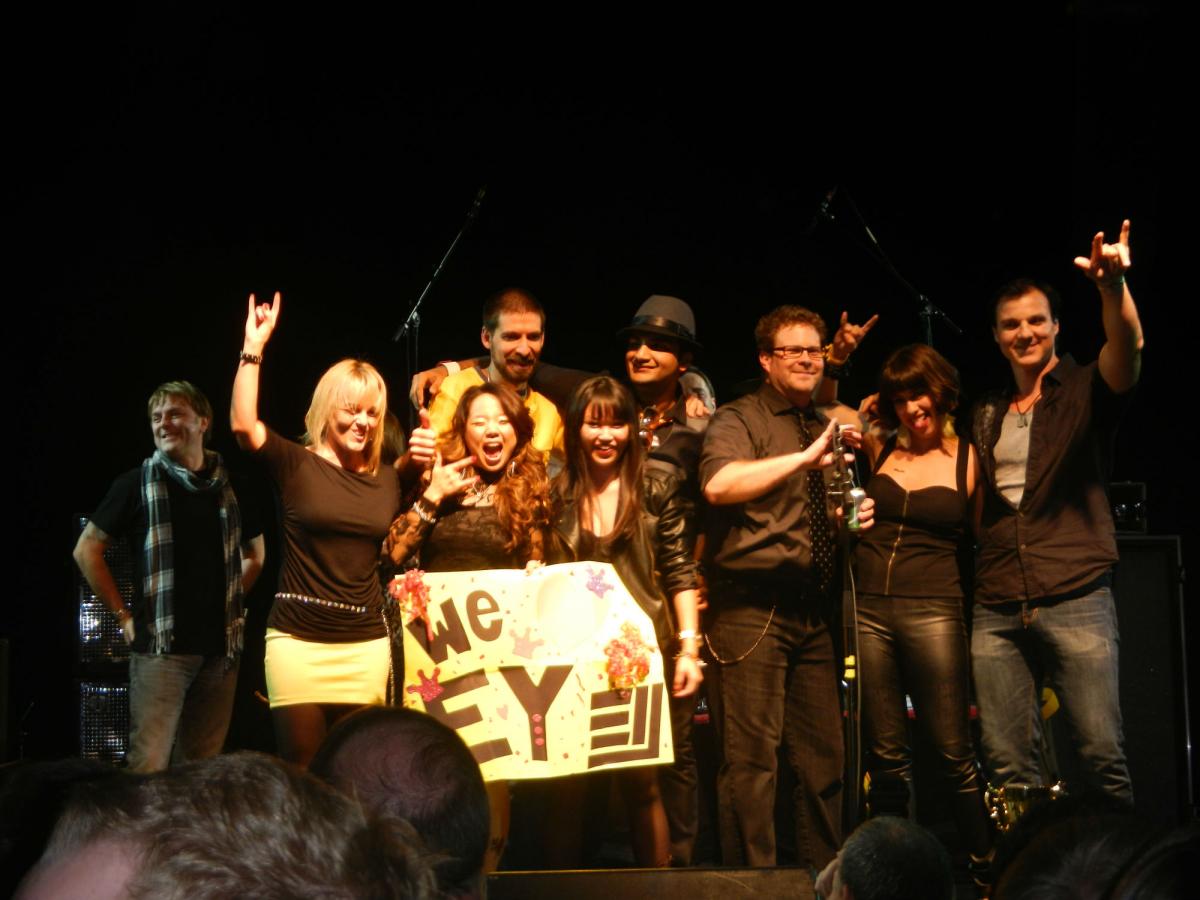 Is that Seth Rogen? 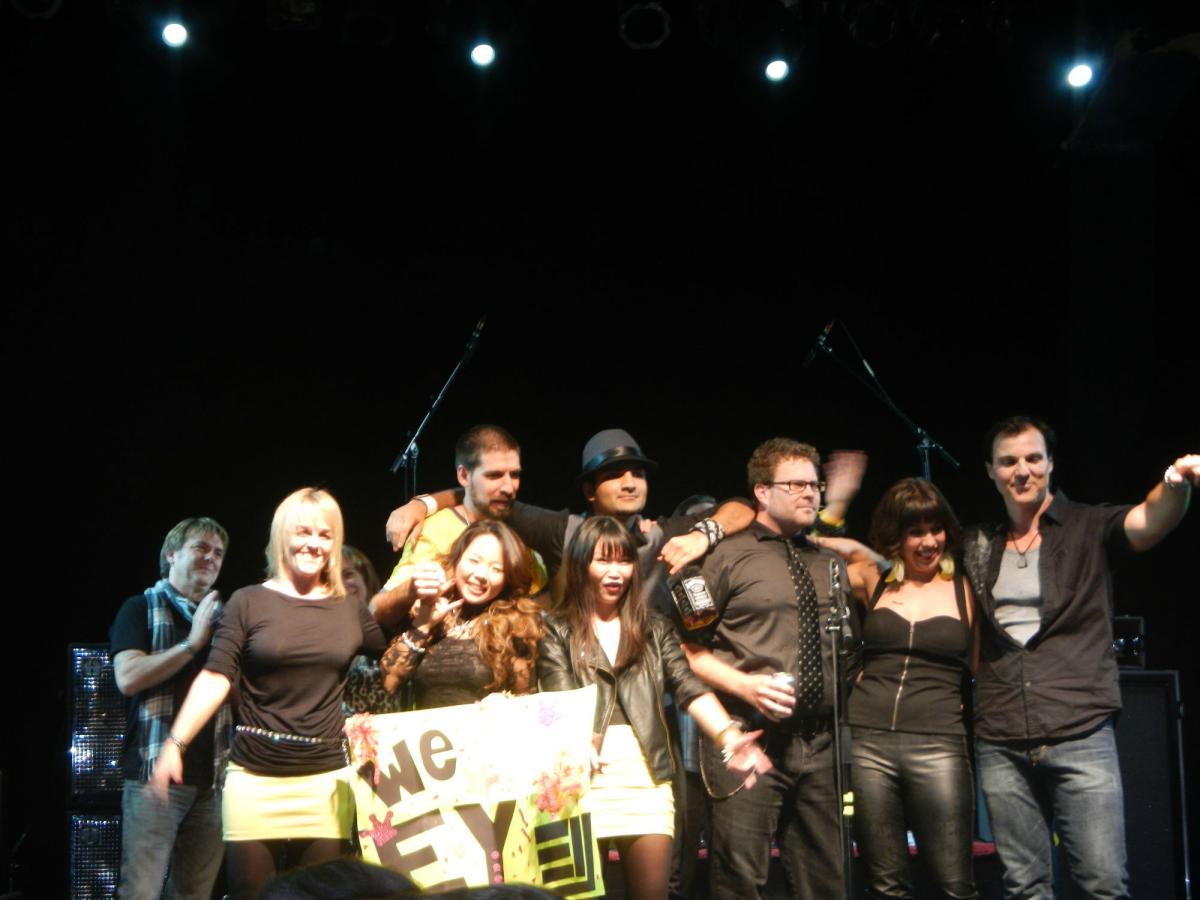 Tennessee whiskey? Shouldn't he be thrown out of Canada for that? 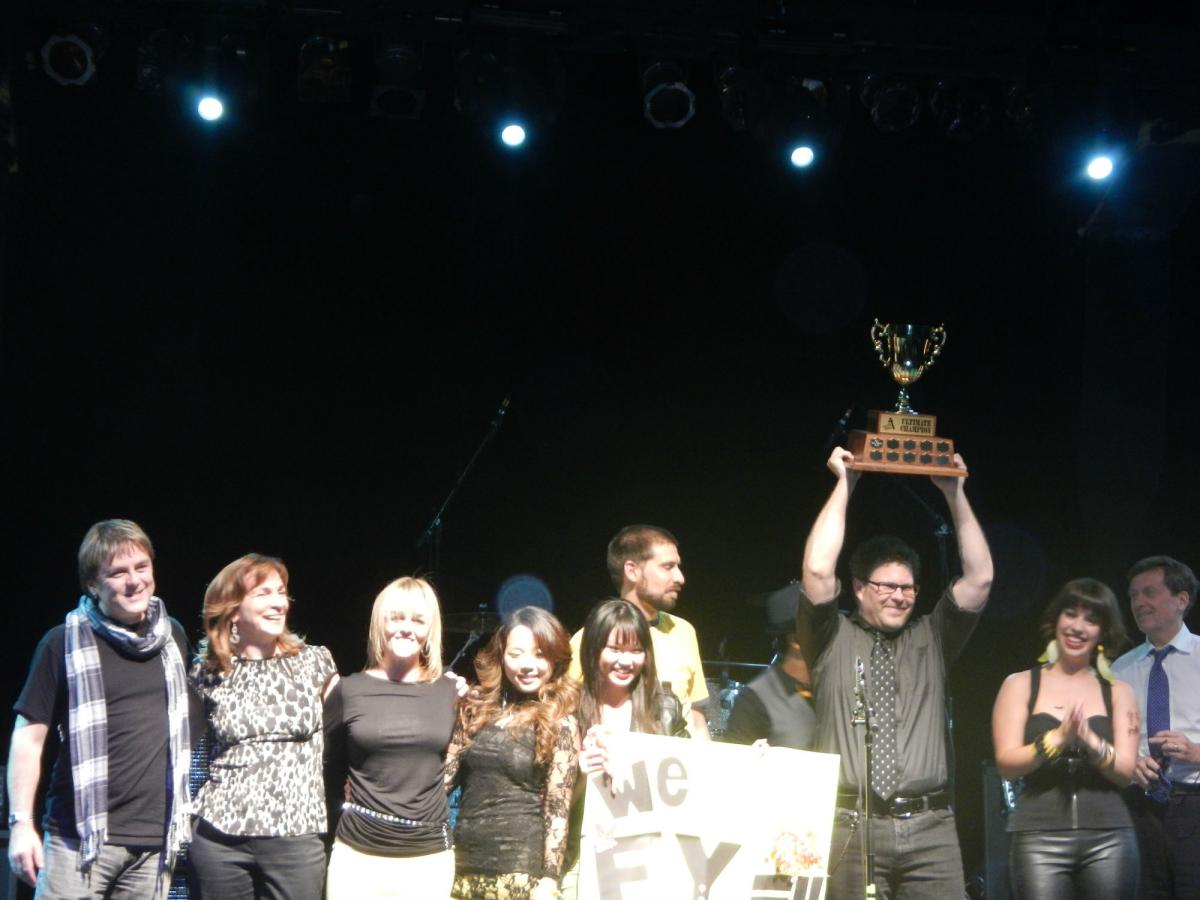 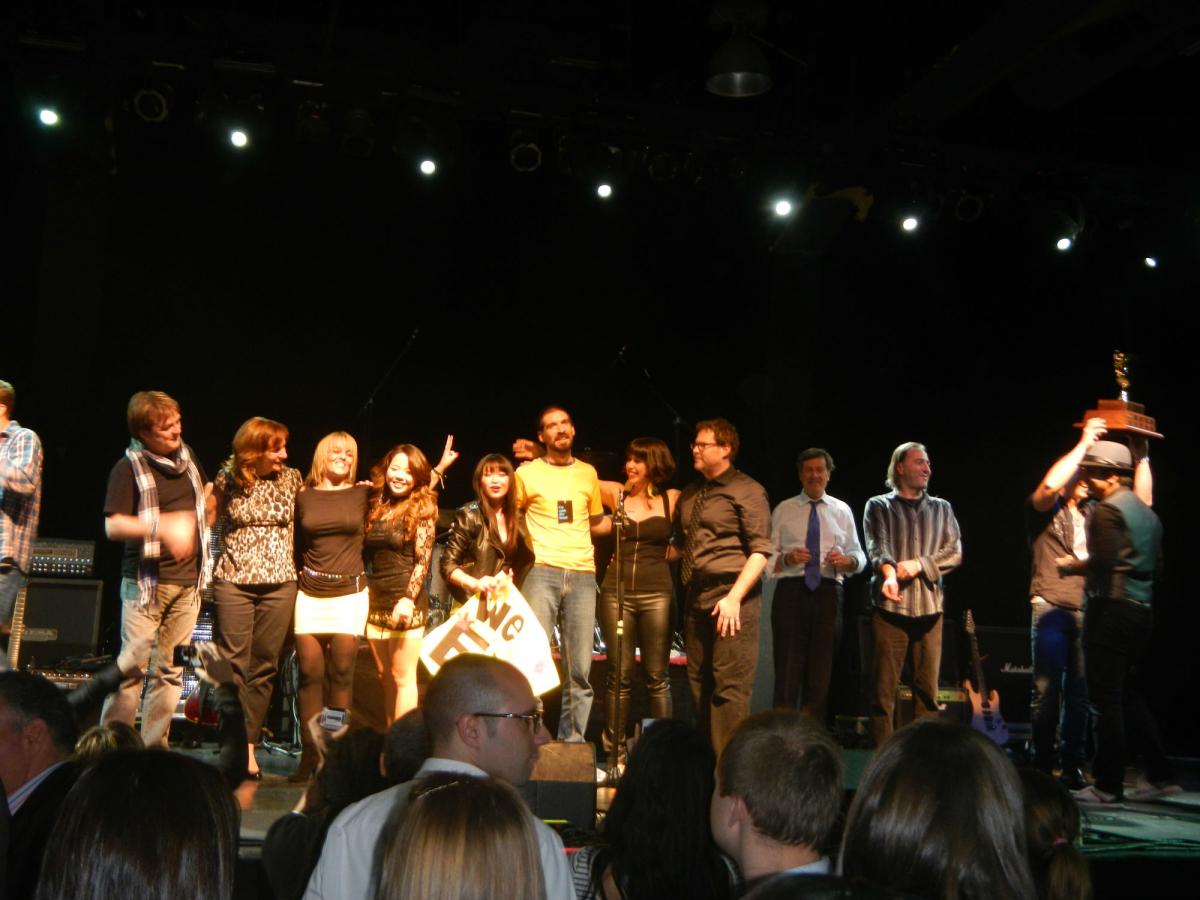 The crowd wonders if they can go yet. 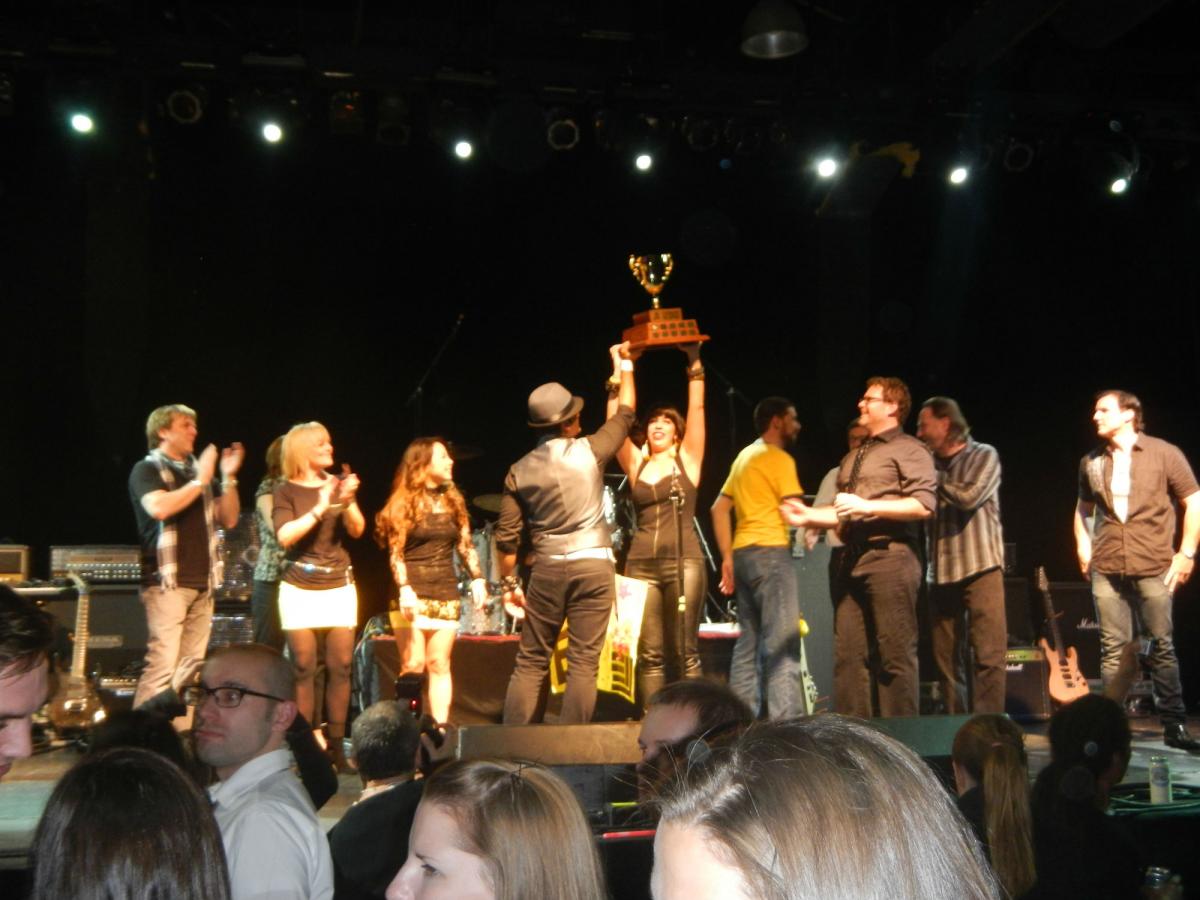 Fedora Guy must think that Leather can't handle the trophy on her own. Crowd has had enough. 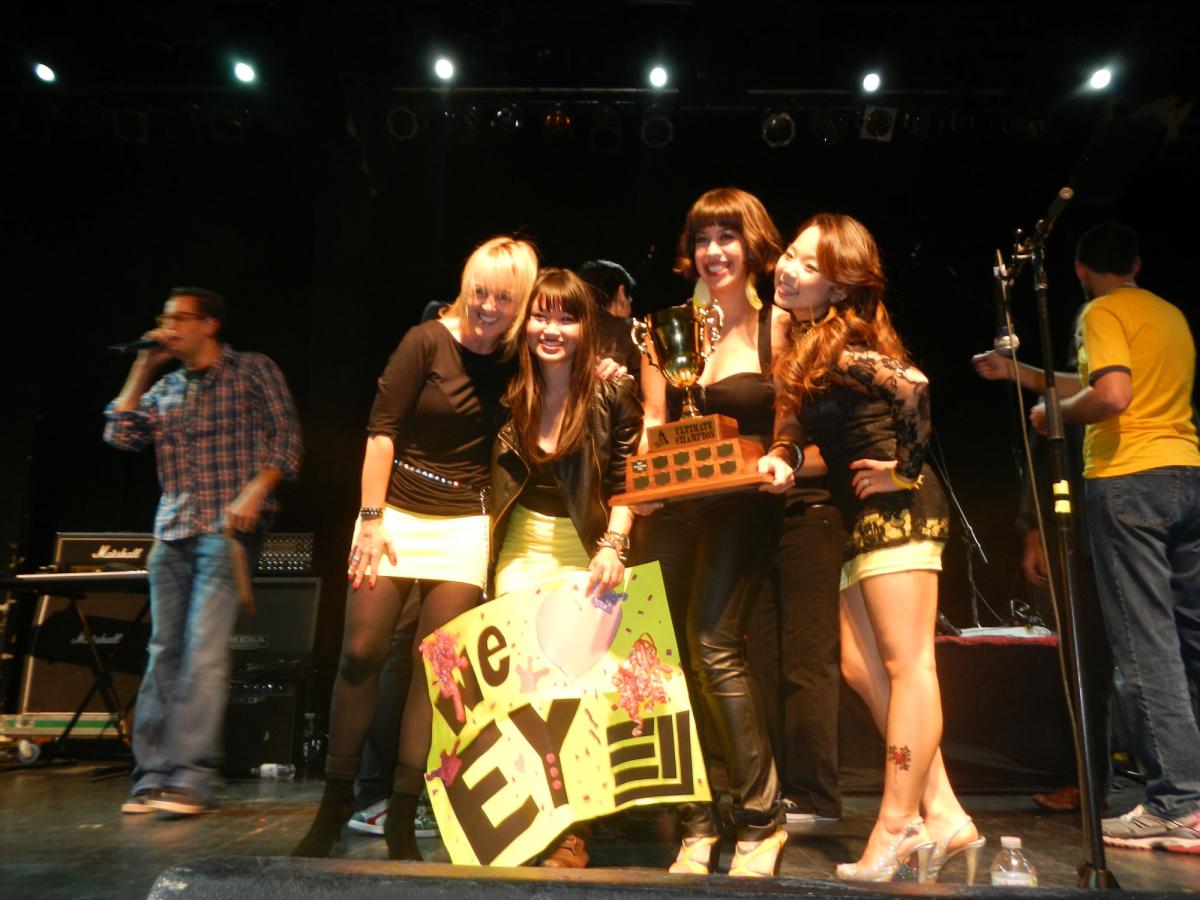 Somewhere Jim Turley is arranging for a private performance.

I got an offer in a corporate role and turned in my two week notice at EY. Everything was fine: HR treated me well and wished me luck in the next chapter of my career. However, on my LAST DAY at EY, the new company rescinded their offer for reasons that I won’t get into […]

14 or 15 years ago I trolled Bill Sheridan of the Maryland Association of CPAs on Twitter about uncovering a weapons cache they’d stashed on CPA Island, a then-revolutionary virtual space in the game Second Life MACPA had set up for…accounting things. Back in 2008 CPA Island was the first (only? It never really caught […]

EY Throws a Fit When Your Job Circumstances Change