Houston Astros executive Brandon Taubman has made headlines in the past 24 hours for allegedly coming off as a jag in front of several female sports reporters.

So what did a jubilant Taubman say as he was celebrating his team going to the World Series? And what’s the big deal about Osuna?

Per the report, Taubman addressed a group of three female reporters, “including one wearing a purple domestic-violence awareness bracelet” and yelled “half a dozen” times, “Thank God we got Osuna! I’m so fucking glad we got Osuna!”

Apstein wrote in her SI report that Taubman’s behavior was “offensive and frightening enough that another Houston staffer apologized.” The team didn’t make Taubman available for an interview afterward.

Now, if Taubman said what he said in front of all the other Astros’ male white executives (sounds just like public accounting, huh?) in the executive suite or wherever they watch games, that’s one thing. But to say that in the clubhouse where he knew women reporters who cover the Astros or who cover Major League Baseball would be present is a total dick move.

Another total dick move is the statement the Astros released last night, which pretty much condoned Taubman’s behavior:

So, what does this have to do with the Big 4? Well, while I was listening to a Chicago sports talk radio station this morning, one of the hosts said Taubman used to work for an accounting firm in the Big 4, which caught my attention. According to Taubman’s LinkedIn page, he sure did:

And his Houston Astros bio also confirms it:

Prior to coming to Houston, Brandon worked for Ernst & Young as a derivative valuation expert. He was also a member of the Ernst & Young advisory team which consulted with the federal government during the 2008 subprime mortgage crisis. Following his time at E&Y, he worked for Barclays Investment Bank in their Equity Derivatives group as an analyst.

Of course Taubman worked at EY, the firm that has recently faced not one but two sexual harassment complaints from women who were former partners there. And it’s not just EY in the U.S. Male executives at EY India and EY Switzerland have also been accused of sexual harassment and bullying by women.

And you probably saw the Huffington Post article yesterday about EY’s sexist training seminar in 2018.

Once an EYer, always an EYer.

UPDATE: So the Astros released a statement from Taubman yesterday, who gave a weak-ass apology for his actions on Saturday night. Weak because he’s only apologizing for the language he used, not for praising a domestic abuser in front of women reporters: 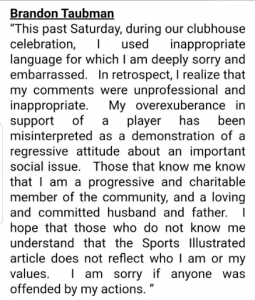 Also, a tipster sent us a link to Taubman’s wedding page on The Knot, which found its way onto Twitter yesterday:

If only the @astros could have seen signs of Taubman’s views about women beforehand, such as a history of abusing workplace power structures with a female subordinate at EY: pic.twitter.com/VX60LZOazi

Here’s some of the text:

We’ll see if this dude still has a job with the Astros when the World Series is over.