This article has been making the rounds so it's only fitting to share it here. Mostly because I know for a fact many of you are a little off your rockers but apparently you guys are less likely to be psychopaths than folks like my esteemed colleague Colin and me. Good news, right?

Now the book The Wisdom of Psychopaths: What Saints, Spies, and Serial Killers Can Teach Us About Success has given us a snapshot into which professions tend to lean toward or away from psychopath characteristics.

If you look at the professions high on the list for psychopath potential, the results shouldn't be surprising: 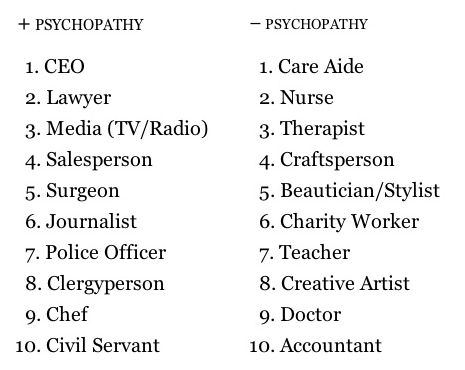 Well, maybe the fact that most of you are not predisposed to psychopathy is surprising but other than that, maybe this makes sense.

CEOs, lawyers, media hacks and cops tend to be ego-driven while nurses, charity workers and teachers are generally in it for the feel-good of helping people. How chefs ended up on the left side is beyond me, here I thought they were mostly nice people.

Do you agree with these findings?

Big 4 FRC to fine Deloitte £440k over 2018 audit [Accountancy Today] The Financial Reporting Council’s Audit Quality team has issued a notice of a proposed sanction on Deloitte, proposing a regulatory penalty of £440k after it was determined that the Big Four firm failed to comply with the auditing framework in its audit of […]