Latest
Friday Footnotes: Did Rona Change the Industry For the Better?; Best Big 4 For Women; WFH Is Out | 2.26.21 Talent-Strapped PwC Is That Desperate Ex Texting You With ‘WYD’ After You’ve Moved On Big 4 Lawsuits: Mauro Botta vs. PwC and VBS Mutual Bank Liquidators vs. KPMG Wirecard Drama of the Day: Hubert Barth Was Most Likely Forced Out as EY Germany CEO The Latest CPA Exam Scores Are Out, But Not Without a Brief Hiccup First

While Grant Thornton U.K. is actively looking for a new CEO to replace Sacha Romanovitch, who is quitting after being stabbed in the back by a group of anonymous partners, everything is hunky-dory at Grant Thornton LLP, where the U.S. firm has decided to keep its current czar around for a little while longer.

The mustachioed McGuire took over as CEO in January 2015, replacing the dynamic Stephen Chipman.

McGuire said he’s “excited to continue on this journey with my teammates at the firm and the clients we serve.”

And why wouldn’t he be excited? He’ll get to spend more time playing hooky from work during baseball season (was Mike hand-watering the infield grass before throwing out the first pitch?) …

Our @mikemcguireCLT put on his #Cubs hat + took to the mound to throw out the first pitch. #LetsGo pic.twitter.com/kl0fPlFsyC

I could get used to playing director. Watch on air later today when @GrantThorntonUS and I bring an all new kind of CEO Message to #THEPLAYERS pic.twitter.com/r57ambstDP

Just don’t ever, ever, shave off that dynamic mustache, Mike. 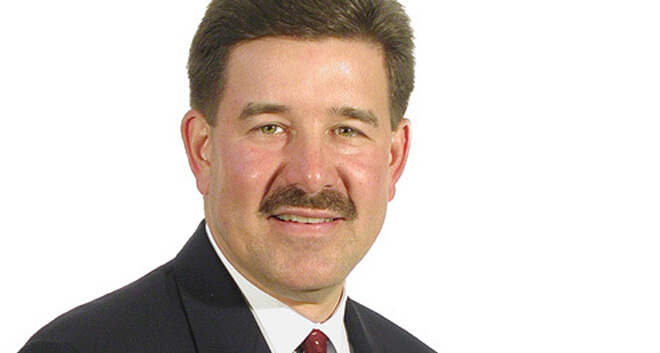