If you picked upsets in your NCAA Mens bracket and all the favorites in your GCMMBSSF&BvsT bracket, then you're in pretty good shape today. My hunch is that you went for the opposite strategy.

While favorites Excel and coffee had no problems and the wins by Bagels and Key Shortcuts were very satisfying, the loss by Someone Else's Hotpocket from the Freezer was devastating. DEVASTATING. 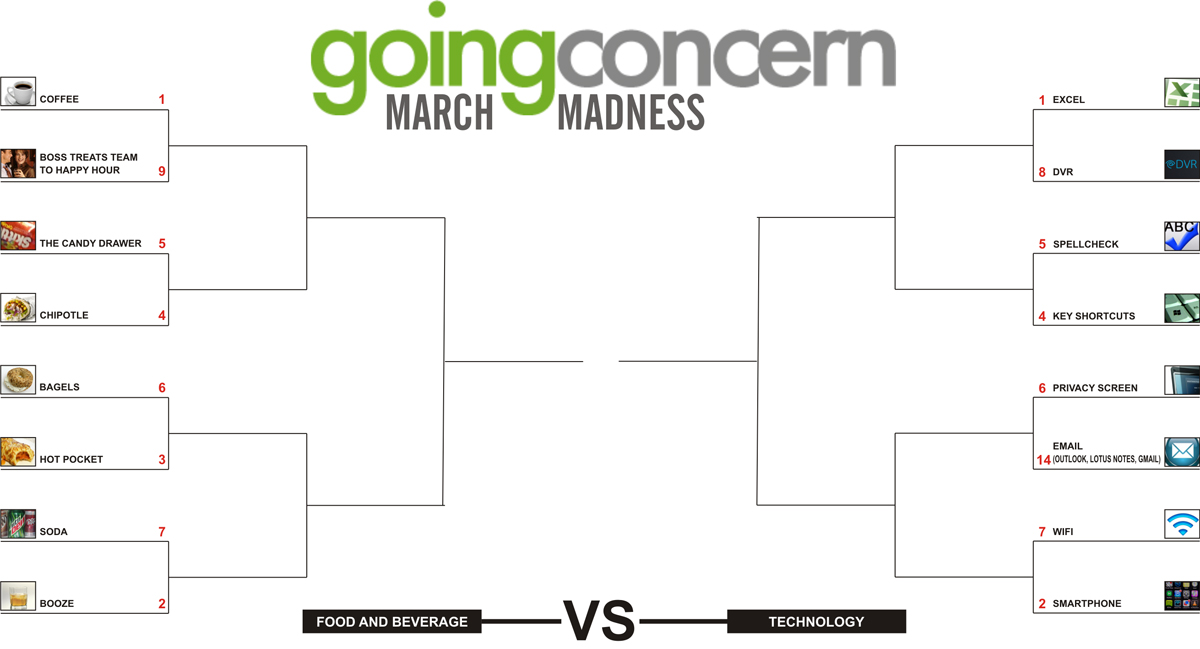 If you picked upsets in your NCAA Mens bracket and all the favorites in your GCMMBSSF&BvsT bracket, then you're in pretty good shape today. My hunch is that you went for the opposite strategy.

While favorites Excel and coffee had no problems and the wins by Bagels and Key Shortcuts were very satisfying, the loss by Someone Else's Hotpocket from the Freezer was devastating. DEVASTATING.

But the best thing to do when you suffer a big loss is to just move on with the winners you have left. And unless you don't drink caffeine, booze, use Excel, or have a taste for Chipotle then you should have a couple of dogs left in the fight.

Anyway, let's get to this before you forget how empty your life has been without brackets.

Food & Beverage
In the second-round match-up of coffee vs. the boss letting you drink until you puke and picking up the tab doesn't get me too excited. I really don't see coffee having too hard of a time here, but I've been wrong about something at some point in time which means, at least in theory, that I could be wrong about this. Anyway, if you think about it, every once in awhile, the boss will throw a happy hour and it sucks. Coffee, on the other hand, rarely lets you down. Even when it goes cold, you just put ice in it and — BOOM — delicious iced coffee. See you in the Elite Eight, coffee.
web survey
Technology
Excel vs. DVR is a far more interesting match-up. DVR has a great chance to knock off the vulnerable Excel. The mother of all spreadsheet applications, as was rightly pointed out in Round 1, can be clunky and you definitely can't use it to photocopy your ass. DVR, as I understand it, will do only as it is instructed. If you want the marathon of Teen Mom 2 to sit on there for week until you're ready to destroy a massive amount of your hope in humanity, then it will do precisely that. With this in mind, Excel has to be going into this with a little apprehensive.
survey hosting

Food & Beverage
The Candy Drawer. Chipotle. One could get you to double over in the middle of meeting with severe abdominal pain while the other will send you running into the bathroom to make it a biohazard. Only one can power you through to the end of busy season, and straight into Type II diabetes or morbid obesity. FUN!

Technology
Key shortcuts had a tough battle holding off mouse in the first round while spellcheck cruised past busy season legend paper shredder.A lot of us take key shortcuts and spellcheck for granted and some don't even use them at all. I'm not even sure another win here will gain either of them any respect. Whatever. Where's the booze?

Speaking of which, we'll get to the bottom of the bracket tomorrow. For now, get to voting.