Here’s an interesting bit of news that dropped in our inbox earlier: EY is offering lump-sum pension buyouts to former employees. There are conditions, of course. To be eligible, an individual must have left the firm prior to January 1, 2016 and won’t be receiving benefits as of June 1, 2016 when the opt-in period begins.

Here’s an interesting bit of news that dropped in our inbox earlier: EY is offering lump-sum pension buyouts to former employees. There are conditions, of course. To be eligible, an individual must have left the firm prior to January 1, 2016 and won’t be receiving benefits as of June 1, 2016 when the opt-in period begins.

A couple of tipsters both informed us with the news and one provided some photographic evidence: 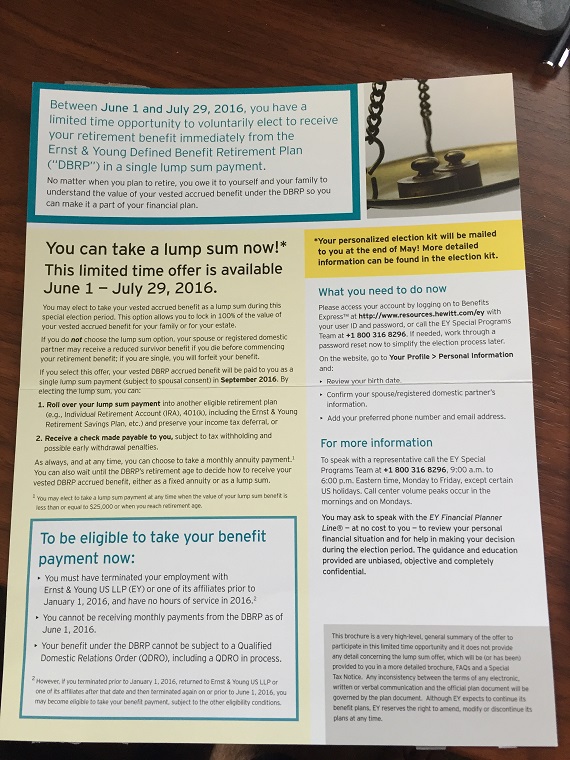 The buyouts aren’t too much of a surprise. Last September, the Wall Street Journal ran a story about a rash of pension buyouts that would be coming in 2016:

In coming months, employers including Newell Rubbermaid Inc. and E.W. Scripps Co. will try to persuade former employees to take their retirement money early, and in the form of a lump sum, rather than as a series of pension payments after retirement. In making the offers, they hope to get part of their pension liabilities off their books, and to cut the costs of maintaining their pension plans.

The IRS helped to fuel the trend toward lump-sum offers when it said in July that it would put off using new mortality-rate calculations based on longer lifespans until 2017. That suddenly made it cheaper for companies to offer pension buyouts now than in the future. The new assumptions that people will live longer will make lump-sum offers more expensive to companies.

“We’re warning clients that if you want to shed this liability, do it now or by the end of 2016, because it is just going to be a different ballgame in 2017,” said Amy Gentile, senior actuarial consultant at Findley Davies, who advises corporations on pension benefits.

Now, the question for ex-EY employees is: do you take it? Since most people won’t beat the return that the pension would earn, the short answer is no. But this isn’t financial advice, just us shooting the breeze. You might want the lump-sum to invest the money in index funds or precious metals or a NASCAR commemorative plate collection. I don’t know, everyone is different about these things.

We emailed EY some questions about the buyout. We’ll update this post with any responses. UPDATE: An EY spokesperson issued the following statement: “As many other plans have done already, we are offering our US plan participants who are no longer with the firm, the increased flexibility to access their retirement benefits without waiting until early or normal retirement age.”

Anyway, one of our tipsters simply wrote:

Would love to see what the community says about this!

Okay then — Have you received the buyout offer? Do you plan to take it? Why or why not? Talk it out.

The Wall Street Journal has an article today suggesting that the EY audit/consulting split may not be the big money pay day EY is banking (heh) on. Why? Consulting is a competitive market and the economy isn’t looking so great these days, and EY’s separated consulting biz will not necessarily have the brand recognition in […]