Back on Aug. 12, 2019, Bubble Wrap maker Sealed Air Corp. disclosed in an 8-K that it had fired EY as its “independent” registered public accounting firm and stated that it had hired PwC. OK, no biggie, the auditor carousel is always going round and round in the Big 4. But the most interesting tidbit in the Sealed Air securities filing was this (bold emphasis added):

This change is being made in light of the Company’s previously disclosed receipt of a subpoena from the U.S. Securities and Exchange Commission (“SEC”) on May 2, 2019 for documents and information relating to the process by which the Company selected its independent audit firm for the period beginning with fiscal year 2015, and relating to the independence of that audit firm. EY has reaffirmed to the Company that EY believes there has been no independence violation, and the Company has not reached a contrary conclusion. Nonetheless, the pendency of the SEC investigation, along with the Committee’s dissatisfaction with information it learned about the process by which EY was selected as auditor, caused the Company to make this change now to allow for an orderly transition for the audit of the Company’s fiscal 2019 consolidated financial statements and to minimize the risk of disruption that could arise in the event of an unplanned change in independent auditors at an undetermined time in the future.

Well, after it concluded its investigation, the SEC DID believe there was an independence violation and decided to take EY and a few people to the woodshed before a settlement was reached with the firm for $10 million on Monday. The SEC stated Monday afternoon:

EY, EY partner James Herring, CPA, and former EY partners, James Young, CPA and Curt Fochtmann, CPA improperly interfered with the issuer’s selection of an independent auditor by soliciting and receiving confidential competitive intelligence and confidential audit committee information from the issuer’s then-Chief Accounting Officer, William Stiehl, during the request for proposal process. EY’s misconduct in connection with the audit pursuit, the order finds, would cause a reasonable investor to conclude that EY and its partners were incapable of exercising objectivity and impartiality once the audit engagement began. The SEC’s separate order against Stiehl finds that, through his misconduct during the request for proposal process, including withholding key information from the issuer’s audit committee, Stiehl caused the issuer’s reporting violations.

“Auditor independence is not merely an obstacle to overcome, it is the bedrock foundation that supports the integrity, transparency, and reliability of financial reporting,” said Charles Cain, Chief of the SEC Enforcement Division’s FCPA Unit. “Auditor independence requires auditors to analyze all of the relevant facts and circumstances from the perspective of the reasonable investor. EY and its partners lost sight of this fundamental principle in their pursuit of a new client. This action further underscores that auditors must apply heightened scrutiny when making independence determinations.”

The SEC’s order against the auditors finds that EY, Herring, Young, and Fochtmann violated the auditor independence provisions of the federal securities laws and that EY, Herring, and Young caused the Issuer to violate its obligation to have its financial statements audited by independent public accountants. The order also finds that all respondents engaged in improper professional conduct within the meaning of Rule 102(e) of the SEC’s Rules of Practice.

Sealed Air is not mentioned by name in the SEC order against EY, but the company is definitely “the issuer” stated in the above press release and the SEC order. William Stiehl’s employer is never named in a separate SEC order regarding his discipline. It says, “Stiehl served as Issuer’s CAO and controller from January 2013 to October 2017, after which Stiehl served as Issuer’s acting and then permanent CFO until his employment was terminated in June 2019.” But Stiehl’s LinkedIn profile confirms it was Sealed Air. 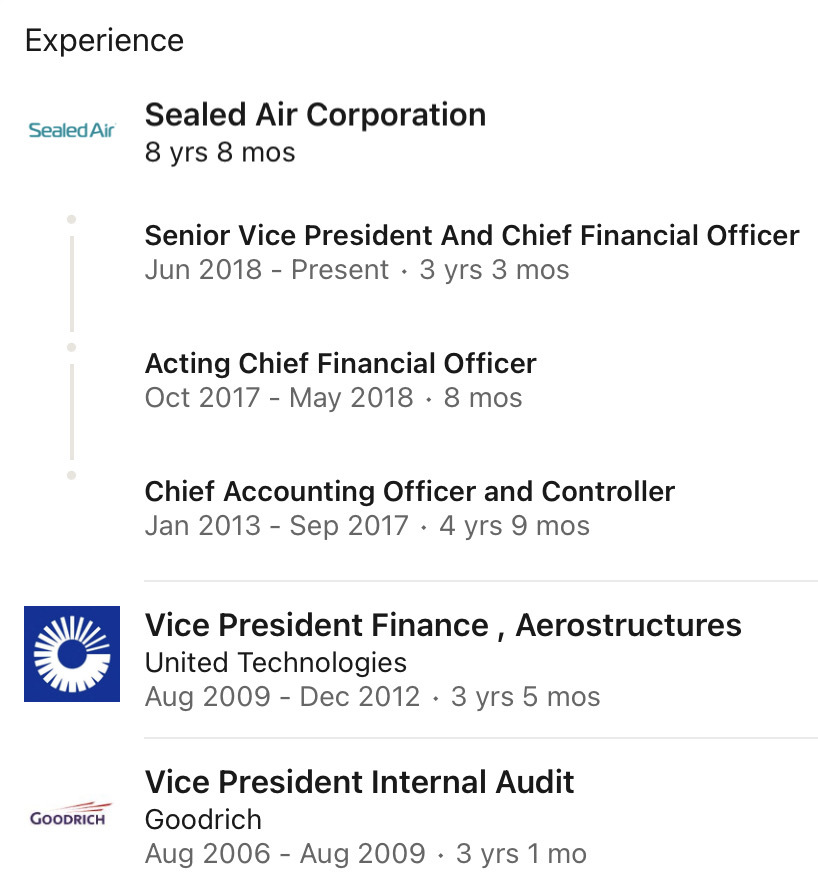 [The Sealed Air press release dated June 20, 2019, announcing that Stiehl had been fired as CFO “for cause” can be found here.]

Also, the SEC said when EY won the Sealed Air engagement, the company became EY’s largest audit client in Charlotte, NC. EY collected more than $13 million in audit, tax, and other service fees from Sealed Air during fiscal year 2015, according to the SEC.

Stiehl is accused of provided EY and the audit partners with a draft request-for-proposal presentation to Sealed Air’s audit committee, which he didn’t provide to any other audit firm in the running for Sealed Air’s engagement, including its auditor at the time, KPMG. The reason why EY was favored by Stiehl is because from 2004 through December 2012, he served in internal audit and senior financial roles for two public companies which used EY as their independent auditor, according to the SEC. Stiehl was one of the primary contacts to the audit partners and EY’s audit teams on those engagements.

The SEC order against Stiehl states:

As Issuer worked internally to initiate the RFP process, Stiehl began to provide certain confidential information to Audit Partner. In August 2013, without Issuer’s knowledge, Stiehl provided Audit Partner and Audit Firm with a draft RFP presentation to Issuer’s Audit Committee. Stiehl did not provide this pre-RFP confidential information to any other audit firm. In May 2014, for example, Stiehl called Audit Partner to provide Audit Firm with exclusive news regarding the timing of Issuer’s upcoming RFP. During this call, CAO also shared confidential news of Issuer’s pending corporate headquarters relocation to Charlotte, North Carolina.

Stiehl allowed Audit Firm to assist in drafting portions of Issuer’s RFP before it was publicly released and arranged for Audit Partner to meet with Stiehl’s financial personnel at least a month before other firms’ personnel were invited to do so. This exclusive access ultimately led to Stiehl adding, at the suggestion of another partner at the Audit Firm, over $1 million in global compliance tax services to Issuer’s RFP.

In its order against EY, the SEC said the firm’s regional management and national leadership “were, or should have been, aware of the conduct undertaken by EY partners in connection with ultimately winning the engagement.”

EY, Herring, Young, and Fochtmann agreed to the SEC’s punishment without admitting or denying the findings and agreed to cease and desist from future violations. Same with Stiehl.

For those scoring at home, here are the penalties: