It’s kinda sad, really, that we don’t bat an eye when the top audit firms in the world, the ones that are supposed to be the gold standard of the profession, still significantly screw up one-fourth of their audits of public companies that are inspected by the PCAOB. Why? Because the number of audits with major deficiencies used to be much, much worse seven, eight, nine years ago.

We saw that this week as we wrote about the latest inspection reports for PwC and Grant Thornton, both of which had significant errors in 25% of their audits reviewed by the PCAOB during the 2017 inspection cycle. Same with the 2018 PCAOB inspection report for EY, which was released earlier this week.

If we go back seven years, PCAOB inspectors found significant errors in 28 of the 57 audits conducted by Ernie’s auditors, for a whopping deficiency rate of 49%. But since 2013, the worst deficiency rate EY has had was 36% in 2014’s report.

Last year when the PCAOB released EY’s 2017 inspection report, we found out that 31% of the firm’s audits inspected in 2016 weren’t up to snuff. So how did the Black and Yellow do in its 2018 PCAOB inspection report? 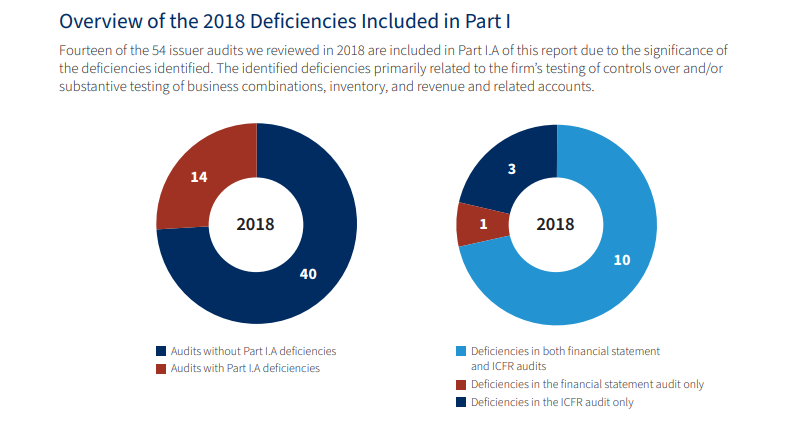 So EY had difficulties on 26% of audits inspected, and even though the Big 4 should have single-digit audit deficiency rates each year, everyone over at EY will give each other pats on the back because they showed much improvement over 2017’s report.

Here’s a historical look at EY audit deficiencies, courtesy of a March 2019 report by Compliance Week with updates by us:

EY auditors botched the following pillars of auditing the most: testing the design or operating effectiveness of controls selected for testing (10 audits), identifying and testing any controls related to a significant account or relevant assertion (six audits), evaluating significant assumptions or data that the issuer used in developing an estimate (six audits), and performing substantive procedures to obtain sufficient evidence as a result of overreliance on controls due to deficiencies in testing controls (six audits).

In addition, EY had some problems in two of 16 audits reviewed with “not documenting its communications to the issuer’s audit committee of changes to significant risks initially identified (and communicated to the audit committee) and the reasons for such changes.” Therefore, EY auditors didn’t follow the rules for AS 1301, Communications with Audit Committees.

The issuer industries that gave EY auditors the biggest fits were industrials and materials, with significant errors found in 50% of EY’s audits for each sector. However, EY nailed the audits for issuers in the communication services, consumer staples, and real estate sectors.

Unfortunately, EY auditors screwed up the one and only audit inspected by the PCAOB of an issuer with revenue greater than $50 billion. Audits of issuers with revenue in the “greater than $1 billion to $2.5 billion” range also got a lot of dings from PCAOB auditors.

This coming week we’ll take a look at the 2018 inspection reports for KPMG and BDO USA. In the meantime, if you see anything else worth noting from EY’s latest report below, shout it out.