Holy crap, it's almost October already. OCTOBER. I don't know about where you are, but over here in Richmond it's as swampy as ever and that makes me feel like we're still lingering in the longest, most obnoxious summer ever. But that's beside the point. According to the calendar, it's still almost October.

What that means, of course, is that you have two months remaining to sit for the CPA exam this year. TWO MONTHS. Again, I'm not sure where the year went but that's not tested on the CPA exam so let's just move on already.

Ignoring the obnoxiousness of a summer that won't quit and the mystery of where the year disappeared to, let's look at some facts.

First, if you plan to knock out as many sections as possible before the end of the year because you maybe kind of sort of dragged your feet all year because, let's face it, that's what we human beings do, well, you might be out of luck when it comes to scheduling.

You see, everyone waits until the last testing window of the year to cram in what they can, and some of these exceptional procrastinators at least thought their procrastination through well enough to secure their ideal testing location and date. If that's not you, you better get on that right now. Hopefully you have a current NTS because if you have to wait for a new one, you might as well just give up and decide to be an A/P clerk for the rest of your life. So if you want to take any exam sections you aren't currently scheduled before December, I suggest you tab over from Going Concern, go do that, and feel free to come back when you're done.

Second, pass rates in the fourth quarter are historically lower than other times of the year. This could be because by October, no one gives a shit. Or it could be that you're more focused on Halloween candy, turkey and the office Secret Santa than you are the CPA exam. It could also be that many candidates blow off half the year and then realize at some point in September that it's September and HOLY SHITE better get this done now lest you have to beg your review course for updates after January. 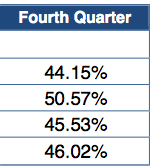 That's not too bad, right? Not at all, unless you compare it to the middle of the year:

But hey, there's some comfort in knowing the first quarter has — at least since the exam changed in 2011 — the distinction of being the suckiest of the quarters now.

So what does all this mean? It means you need to get off your ass NOW. Expect more new AUD material in January than ever. Even though the new standards started showing up in 13Q3, examiners like to slowly introduce Earth-shaking content. I'm willing to bet they've been taking the safe route since July and by the first quarter of 2014, will feel more confident with new material and therefore shove it directly where candidates' sun don't shine.

You should also expect the New Year hangover that will drag on through the second quarter and leave you back where you started trying to pile in to Q4 with everyone else who wasted a whole year if you don't get on this.

Also, not sure if anyone read the 2013 Spring Alert but if you did, you found this interesting bit: "Looking to the future, a practice analysis is scheduled for 2015 that will re-evaluate the knowledge, tasks and skills required of CPAs entering the profession, determine the feasibility and resources required for assessment and develop an updated blueprint documenting the content, skills, length and time of the Exam." That's a ways off and it'll take a lot of anaylsis and discussion before anything changes, but it's something to keep on the radar.

Translation: just get it done. Remember, studying during the holidays is an excellent way to get out of awkward family events.

Ed. note: update at the bottom, our hopes have been dashed. Second update includes a statement from KPMG As I’m sure you’ve heard by now the profession is having trouble recruiting future CPAs. Accounting student numbers aren’t critically low yet but fewer and fewer graduates are taking the CPA exam, an issue that keeps AICPA […]

For years I would copy paste the entire list of Elijah Watt Sells Award winners on this here website even though I’m sure winners Googling themselves were the only ones reading said list. This year I’m continuing the tradition from last year and skipping past that to get right to the one thing all you […]