Direct indexing is an investment strategy that can help your clients take charitable gifting to the next level, potentially offsetting gains and reducing tax liabilities in ways that improve their after-tax performance—and possibly even lead to better outcomes for the charity or recipient.

Using direct indexing for charitable gifting (and for other things, too) is sort of like leveling up in a role-playing game (RPG)—a metaphor we’ll try not to wring completely dry by the end of this piece. It allows investors to gradually improve aspects of their portfolios, gaining a figurative “+1” in factors like flexibility and control—without the need to grind for XP slaying hundreds of boars in the Enchanted Forest.

But before we dive into the specifics of direct indexing and charitable gifting, let’s address the question that’s probably on a lot of your minds (especially those of you who aren’t regular Going Concern readers—we’re looking at you, Steve): What is direct indexing?

We’ve covered the topic in two previous articles. In the first, we explored some fun ways CPAs can explain the tax advantages of direct indexing to their clients. Then, we talked about how CPAs can make direct indexing their estate planning secret weapon.

If you’re unfamiliar with direct indexing, you might want to go back and read those articles, particularly the first one. But don’t worry, we’ll explain the term for you one more time, maybe because we’re nice or maybe because we get paid by the word—we’re not even sure anymore.

What is direct indexing, and why does it matter to CPAs?

In short: Direct indexing is an investment strategy in which the investor owns the individual securities that would normally make up a commingled fund (like a mutual fund or exchange-traded fund), rather than owning shares of the fund itself. So, for example, instead of owning shares of an S&P 500 Index fund, the investor would directly own shares in those individual companies. And, with direct indexing, the investor owns those shares in a separately managed account (SMA) instead of a mutual fund or ETF.

Direct indexing provides investors with greater flexibility and control, as they can buy, sell, and trade individual securities that would otherwise be trapped within the fund, while still enjoying the broad market exposure that’s critical to passive investing.

Returning to our RPG analogy, direct indexing tends to deliver the best results when multiple people are involved. Many RPGs require you to form a party before you can tackle the most difficult (and rewarding) quests. When building your party, you’ll want to find characters with strengths and abilities that complement each other, creating a whole that’s greater than the sum of its parts.

Similarly, using direct indexing for charitable gifting (or for anything, really) is a challenge that shouldn’t be approached alone. The client’s financial advisor should take the lead, but CPAs like yourself can be important members of the party, too. By learning about these kinds of strategies, suggesting them to your clients and to financial advisors, and referring financial advisors to firms that are experienced in direct indexing, you can provide your clients with a more holistic level of support—and set your practice apart from less-knowledgeable competitors.

Before this article itself starts taking on a particularly annoying aspect of RPGs—an overly long, unskippable intro that takes forever to get to the point—let’s move on to our chosen topic. Here are three ways direct indexing can help investors level up their charitable gifting.

As we stated earlier, direct indexing gives your clients more flexibility and control over their investments and assets. It allows investors to gift individual stocks or bonds that might otherwise be trapped inside a mutual fund or ETF to the charities of their choice, which can provide compelling advantages, particularly with regard to taxes (more on this later).

Direct indexing can also help investors avoid awkward situations and conflicts of interest in charitable gifting. You wouldn’t want to, say, donate shares of a mutual fund that’s heavy in Big Oil to Greenpeace. With direct indexing, investors have the power to gift their assets more intelligently, preventing conflicts of interest and helping ensure that the right cause receives the right benefits.

(Of course, direct indexing could also allow mischievous investors to create these conflicts on purpose and with greater ease—like, for instance, forking a huge pile of Burger King shares over to the Ronald McDonald House. The charity would likely be thankful for the gift regardless, but that would be a -1 integrity kind of move.)

2. Direct indexing helps maximize the benefits of donating securities instead of cash

Deciding whether to donate cash or securities to a charity can be complicated, and it’s ultimately something investors will want to discuss with their advisors in detail. But for investors who do choose to donate securities, direct indexing can help them maximize the benefits.

To illustrate, let’s briefly head back into the world of gaming. In most RPGs, inventory management is a critical component of a winning strategy. You can’t carry around that +5 battle axe forever—especially if your character isn’t strong enough to lift it—and over time it will become a drag on your character’s performance. You could sell it, sure, but sometimes it’s smarter to give it away to another member of your party or guild who needs it, thus creating benefits for everyone involved. 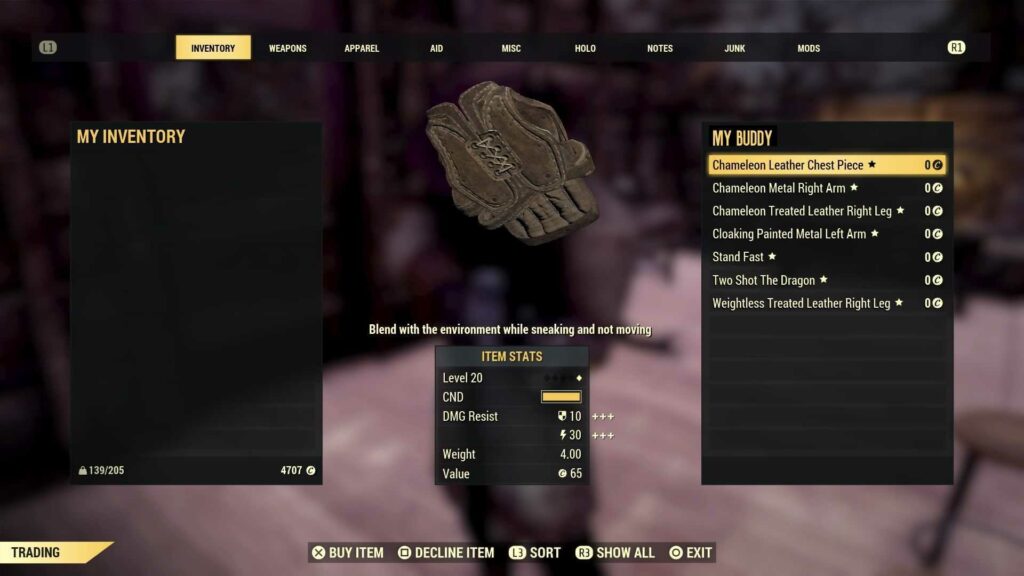 The idea behind gifting securities in lieu of cash is similar, and direct indexing can make the effect even more powerful. If an investor chooses to gift highly appreciated assets (i.e., those that have substantially increased in value since the investor purchased them), both the investor and the charity can avoid tax liability. The investor offloads the asset without paying capital gains tax on it, while the charity gains a step-up in cost basis once the assets are transferred.

On top of the benefits of gifting highly appreciated securities instead of cash, investors with a tax-managed direct indexing portfolio can realize additional benefits if they replenish their investment portfolio with cash that equals the value of gifted stocks. This manner of reinvesting results in a cost-basis increase that enhances the potential for eventual tax-loss harvesting, which should help reduce future tax payments. We’ll review a real-world example of this at the end of the article.

In either case, direct indexing provides investors with more flexibility and options for which securities they’ll gift and which they’ll retain. This can ultimately lead to better after-tax performance for the investor—and possibly for the charity, as well.

We briefly covered charitable remainder trusts (CRTs) in our previous article on estate planning, but because they apply even more to this topic, we’ll dive a bit deeper this time. Using a combination of CRTs and direct indexing can help investors improve their financial security and increase support for their chosen charity—sort of like how some RPGs allow you to combine multiple magic spells to achieve a more potent or specific effect.

CRTs come in two forms: the charitable remainder unitrust (CRUT) and the charitable remainder annuity trust (CRAT). As before, we’re going to focus on CRUTs because they are better suited to a low-interest-rate environment (although, with the Fed’s recent half-point hike to its benchmark interest rate, it might be wise to look into CRATs as well.)

The general idea behind CRTs is that assets are placed into a trust that creates both a tax deduction and an income stream for the donor. At the trust’s completion, the remaining assets move out of the donor’s estate—reducing its size for tax purposes—and the chosen charity receives the remainder.

A CRUT itself is generally exempt from tax, just like an actual charity. However, unitrust distributions—the cash flow the trust provides to the investor—are subject to tax. The IRS uses characterization rules to determine the nature of distributions from the trust. The character of distributions received by CRT income beneficiaries is determined using a separate-tier system, which establishes an order for the distribution of four categories of income and corpus.

We won’t get into what the four tiers are and how they work, but this paper on improving the tax management of charitable remainder unitrusts covers it quite well. You can begin to see how direct indexing could provide a lot of value here, though. Having the ability to select individual securities instead of shares of a commingled fund gives investors more flexibility and control over what goes into the CRUT and where the money goes when it comes out, potentially improving after-tax results for everyone involved.

Throughout this article series, we’ve been encouraging you to refer your financial advisor friends to Parametric to gain more advice and guidance on direct indexing. For Parametric, direct indexing is no game—it’s a potent investment strategy they’ve been perfecting for more than 30 years. Parametric can help clients improve their after-tax performance using direct indexing and other strategies across investing, estate planning, and—yep, you guessed it—charitable gifting.

For you “show me” types, this case study shows how Parametric helped a client achieve better tax efficiency with her charitable gifting. Previously, she was selling stocks and donating the cash proceeds to a local food bank. Parametric helped her switch to a two-step process: 1) identify the most advantageous securities and donate them directly to the food bank, then 2) use cash to purchase stocks with a much higher cost basis to essentially “replace” the donated shares. The strategy increases the potential for tax-loss harvesting, which should help reduce her future tax payments. 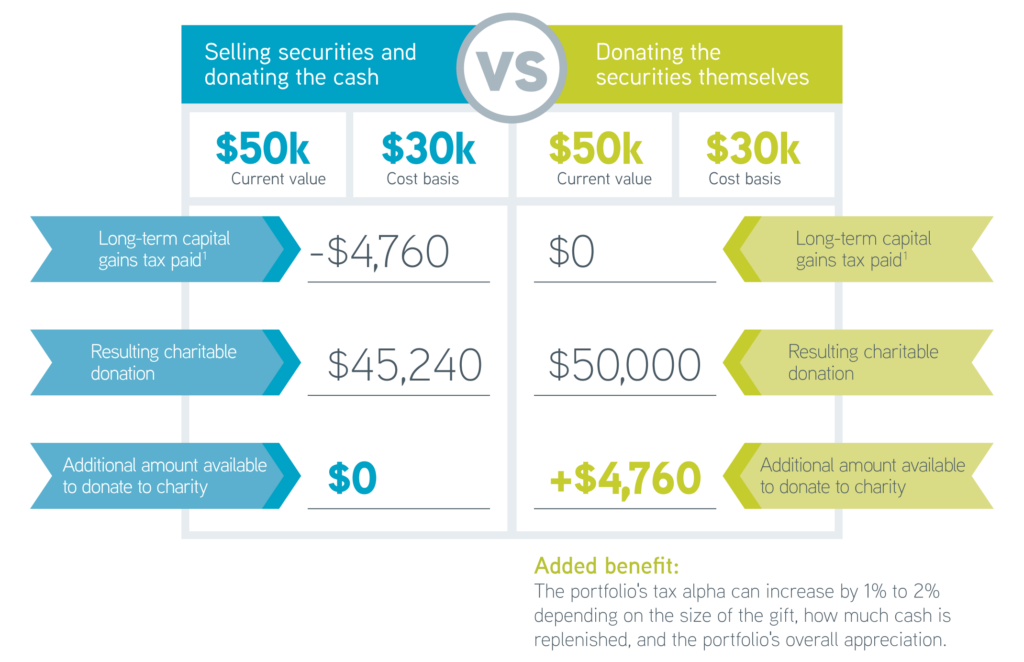 With $415 billion in assets under its management, Parametric helps clients in North America and around the globe access efficient market exposures, solve implementation challenges, and design portfolios that respond to their evolving needs.

Ready to learn more? Dive deeper into Parametric’s offerings and access additional resources on direct indexing and other topics now.