NASBA recently released their yearly Candidate Performance books, which we used to buy and comb through for your sake but stopped after NASBA politely asked us to stop sharing the data they wanted people to pay for. So we won’t be drilling down into that data, but we do have some points to share.

In 2017, the jurisdictions with the highest pass rates were:

Performance metrics also indicate 95,654 candidates took the CPA exam in 2017 (of which 71,199 were new candidates), with 25,834 candidates passing their fourth section of the examination. Utah and Wisconsin regularly battle it out for the top spot so meh, no surprise there.

In 2017, the universities with the most candidates sitting for a first-time section were:

If you’re interested in more data, you’ll need to cough up for either the Jurisdiction or University edition(s) of the book from NASBA.

We were most interested in that unique candidate number, which grew by 9% the year prior but appears to have come crashing back down after anticipated CPA exam changes took place. This is expected, as the same exact thing happened back in 2010/2011 at the launch of CBT-e. Y’all are so predictable.

To get an idea of how unique candidate numbers have fluctuated over the years, we crunched the data a little. Very little, but I assure you data was crunched. 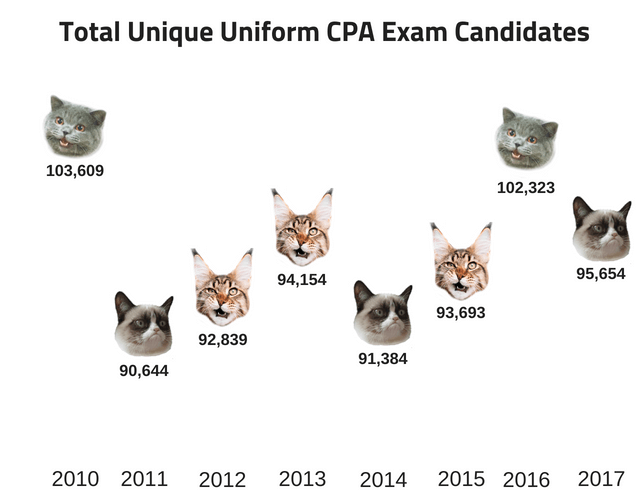 In 2014, AICPA President, CEO & Durian Master Chef Barry Melancon expressed concern in the “building gap” in those graduating with accounting degrees and those actually taking the CPA exam. “We have had about six consecutive years of record numbers of people majoring in accounting. That’s a great thing. For the last three years, however, we’ve basically had a level number of people taking the CPA exam. So there is a gap that’s building,” he said.

As we can see from my handy-dandy chart, the numbers crept up but still didn’t rival the “record growth” touted by the AICPA [PDF warning] just a few years prior to Melancon’s apocalyptic comments.

The Accounting News Roundup newsletter is back! Every Friday you’ll get a recap of recent content posted on Going Concern, On This Date in Going Concern History, list of hot remote and hybrid accounting jobs, and more. Sign up here today.

Tim Gearty has taken the #3 spot on the NJBIZ 2022 Accounting Power 50. From NJBIZ: Not many CPAs get stopped by fans for selfies, but Timothy Gearty is one of them. As editor-in-chief and national lead instructor for Becker, a global CPA exam-prep leader, Gearty — who’s also the managing partner of Florham Park’s […]