Please ensure Javascript is enabled for purposes of website accessibility
Latest
Sounds Like the EY Split is Going Forward Whether Partners Want It to Or Not Here’s What Happens When You Hire AI to Do Accounting Deloitte and PwC Top This Indeed List of Companies Hiring Tech Workers Waste, Inefficiency, and Egregious Spending Abound at the PCAOB, Says Employee Apparently Interns Are Flocking to PwC to Learn More About … HR

As the Black and Yellow comp conversations continue this week, we have some news to share with regards to the firm's bonus structure.

Here's a tip that came in late on Friday:

These will be known as "Performance-Based Bonuses" (aka "PBB") and another tipster sent us a document that outlines some of the details. According to the document, the reason E&Y is shifting to the PBB is that "it is consistent with the outside market," and "studies show us that the vast majority of professional service companies have evolved their compensation programs to shift a greater percentage of compensation from base pay to variable pay."

All righty then. Sounds like the typical monkey-see-monkey-do behavior E&Y is known for. How about some details? Here are the eligibility requirements and measurement criteria: 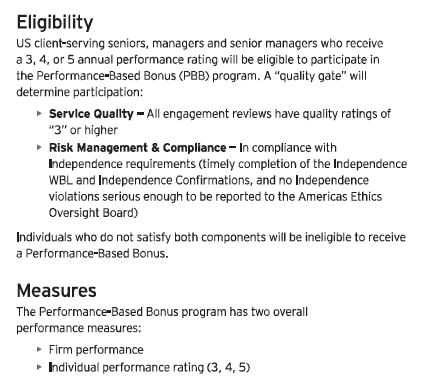 And just in case you missed it above, the new structure will be going into effect for fiscal year 2013 for the advisory group only. It won't be applied to the audit, tax, and TAS until fiscal year 2014. Why, exactly, is advisory getting a jump-start on the program? The firm has an explanation for that: 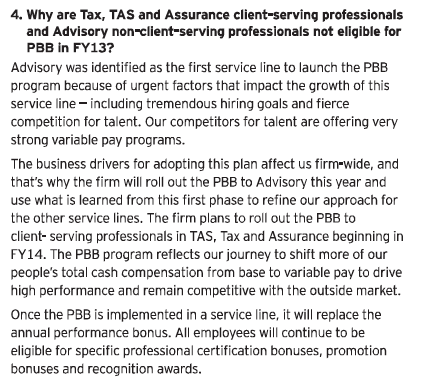 So the upside for the advisory is that they are extra special and get to experience PBB first. The downside is the possibility of the firm shitting the bed in 2013. That seems unlikely, but stranger things have happened.

A little extra bonus for those of you that are more visual types, here's a graph that is very similar to those that we've seen out of PwC and Deloitte. It illustrates your progression through the firm, noting the milestones and the increase in base salary along the way. 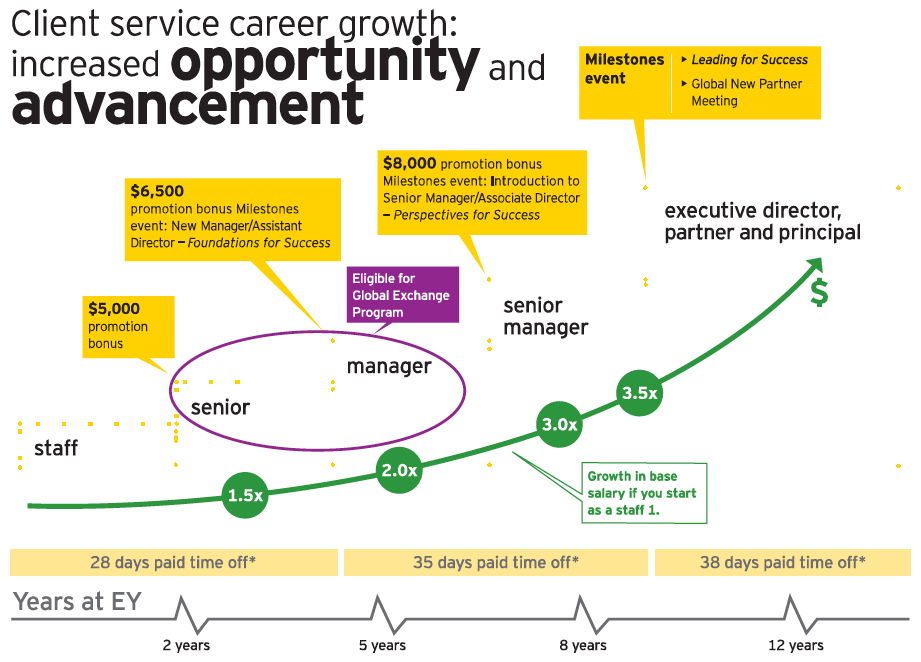 So there you have it, the future of bonuses at E&Y. Discuss as you see fit.

As EY continues to hammer out the details of the audit and consulting split, PwC has set its sights on adding EY partners to The New Equation. Lots of EY partners. In October, PwC Global Chairman and 2012 Going Concern Hottest Accounting Firm Leader winner Bob Moritz told the Financial Times in no uncertain terms […]

Here’s What Happens When You Hire AI to Do Accounting