Please ensure Javascript is enabled for purposes of website accessibility
Latest
Research: Working From Home Frees Up Two Hours a Week, Time Many People Spend Doing Work If This Person Can Pass the CPA Exam, So Can You EY Germany Gives 40 Partners and 380 Staff the Boot to Boost Profitability After That Whole Wirecard Thing Do Ex-Big 4 Accountants Make Good NFL Team CEOs? KPMG Vice Chair Hopes All the Tech Layoffs Will Scare College Kids Into Accounting

Mark O'Connor of Monadnock Research wrote an epic post over at re:The Auditors yesterday on the Big 4's advisory performance for 2013 and the resulting "conflict metrics." The whole post is worth a read but this chart sums things up well. 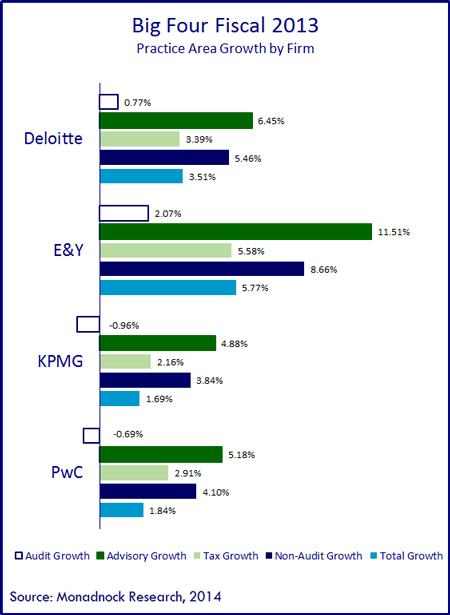 No surprise that each firm's advisory and non-audit growth far outpaces their assurance practices'. This growth, of course, raises questions about the possiblity of conflicts of interest for firms who have traditionally relied on their audit services, which requires independence in fact and appearance.

The firms have flouted their independence for years, but advisory growth in the past three years has brought the issue back to the forefront. Fortunately for the Big 4, the ambiguity of the "appearance" of conflicts of interest continues to save them from outright violation of independence.

The Big Four, without exception, oppose the notion that non-audit services present risk that cannot be effectively mitigated. Those advocating such a perspective claim that limiting the ability of auditors to expand advisory practices is not warranted, primarily because they have effective internal “controls” in place with systems and processes that ensure regulatory compliance.

Sorry, back to O'Connor:

We believe, however, that there are substantive regulatory compliance risks, and other unregulated risks, to stakeholders of public and private entities that must be transparently acknowledged, identified and mitigated.

We look forward to the day when privately-held partnerships with a track record of fighting regulation and disclosure tooth and nail start reflecting on the substance of independence rather than the form. With bated breath.