The website Big4.com likes to put out an analysis of the Big 4 firms' revenues every year and we're pretty grateful because we sure as hell don't want to do it.

That said, it's largely just a press release for all the firms to remind everyone how much they're crushing it. And although Big4.com "believes in these numbers and analysis" they also admit that the "source of figures for this analysis are publicly available financial statements and/or press releases issued by Deloitte & Touche LLP, Ernst & Young LLP, KPMG LLP and PricewaterhouseCoopers PwC LLP on their website or on the internet." So there's that.

Anyway, there's plenty of interesting information in the report so take a flip for yourself if you're bored. We'll highlight a few things we found interesting.

But enough with the words already; how about some charts?!

Here's what audit revenue as a percentage of total revenue looks like: 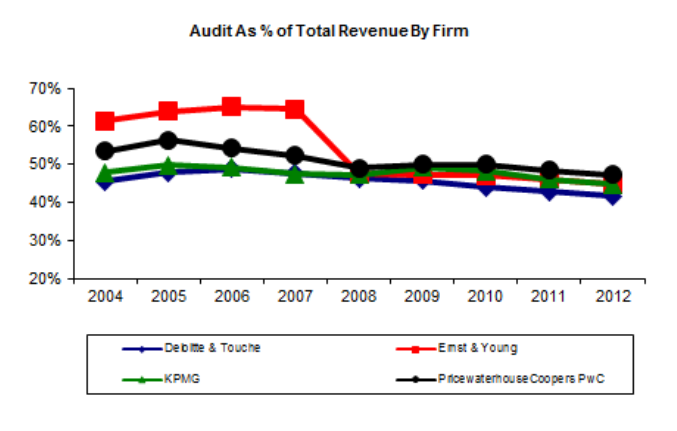 And here's advisory revenue as a percentage of total revenue: 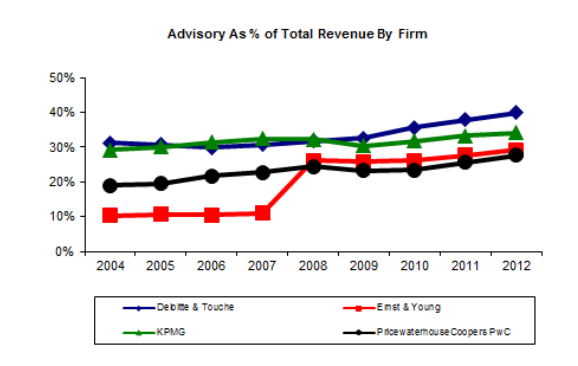 Two clear trends here, obviously. Advisory is going gangbusters while audit loses pace year after year although it remains the largest service line (just barely in Deloitte's case). What's also interesting — but not necessarily surprising — is that Deloitte's ratio of advisory revenue to total revenue is by far the greatest. It just so happens that the Green Dot also has the lowest ratio of audit revenues to total revenue.

Finally, here's the overall trend of growth for all three service lines: 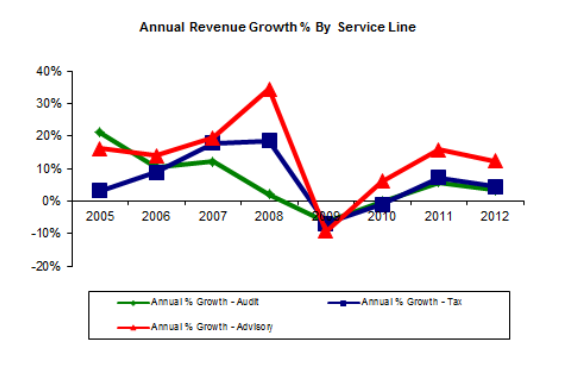 There's really, truly nothing interesting to say about the tax business for these firms. It's boring. It's steady. They probably like it that way. Maybe what I'm saying is, "WE COULD REALLY USE ANOTHER TAX SHELTER SCANDAL, YOU GUYS."

So that's probably enough information to tide you over for a while. However, if you prefer your Big 4 revenue analysis delievered by spoken word, then this short video should satisfy.

They sure know their audience, don't they?