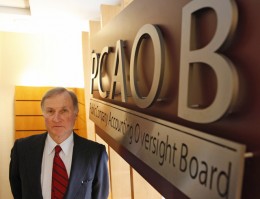 Sometimes I get the impression that the Big 4 don’t fully appreciate what the PCAOB is supposed to do as a regulator. Now, please don’t confuse “appreciate” with “like.” The Reuters report from yesterday makes it perfectly clear that the firms don’t like what the PCAOB does at all.

What’s become obvious, though, is that the audit firms want the the PCAOB to be a certain kind of regulator. One that that smiles and nods, looks the other way when necessary, and defers to their judgment would be perfect! A regulator that smiles and nods and takes their opinions seriously but also has their own opinions would be acceptable.

But a regulator that disrupts the status quo is not what they had in mind at all. And, as mega businesses with lots of money and influence are wont to do, they’ve tried to use their influence through the SEC to keep the PCAOB on a short lease, specifically through the Office of the Chief Accountant. But not everyone buys that story:

The SEC’s defenders say its critics overstate the power of both the Office of the Chief Accountant over the PCAOB and of the Big Four firms at the commission. The Big Four, they say, are natural talent pools from which to recruit the SEC’s accounting czars, some of whom have been strict regulators.

And that’s true! I don’t really know where else the SEC would find qualified people to run the OCA. The revolving door is always a gamble but it’s usually a pretty safe bet for the firms. But every once in awhile, someone turns out to be a cowboy and that tends to upset people and they tend to hold grudges.1

What the audit firms would really like is for the PCAOB to stick to auditing:

Some Big Four accounting firm officials, meanwhile, say the tensions with the PCAOB stem from turf battles and personality clashes and aren’t part of any industry effort to undermine a tough watchdog. The Big Four say they don’t oppose regulations that improve standards, but believe the PCAOB would be more effective if it pushed rules focused on the nuts and bolts of auditing.

The reason, I think, that firms want the Board to stick to “the nuts and bolts of auditing” is so that they can bog them down in a debate over the merits of this methodology or that methodology; the kind of busy work that would keep the Board marginalized. This would also allow lobbyists like the Center of Audit Quality to stick their beak in under the "spirit of cooperation.” And it also gives the firms an excuse to push back hard on inspection results like Deloitte did back in 2009:

After both the 2007 and 2008 inspections, Deloitte didn’t address a range of systemic failures identified by the PCAOB within the 12-month period mandated by law. That meant that the PCAOB was free to release its most damning findings to the public. Disclosure would be an embarrassing and potentially costly blow for Deloitte.

On March 26, 2009, Deloitte wrote to the PCAOB that the board had no right to question the decisions of the firm’s auditors. “In our view, such reasonable judgments should be respected and not second-guessed,” Deloitte wrote.

That level of hubris still lingers in firms which is why auditors (and others) bristle at proposals like firm rotation and partner disclosure. Which is silly. Regulation isn't personal. It's government! And audit firms are still getting used to government outsiders holding them accountable, that’s all.

The PCAOB, like all regulators, is overwhelmed and understaffed. Yes, they are required to oversee and inspect audits, write and enforce rules, but they seem to consider serving investors and the public interest as their primary function.

And that’s something audit firms used to do.

1 Honestly, when certain people learn that I studied under former Chief Accountant Lynn Turner, they look at me like I kick puppies for fun.

Fortune has come out with their 100 Best Large Workplaces for Women list and while no accounting firms made the top ten, Deloitte managed to claw their way up to #16 from #51 in 2021 thus making them the highest-ranked Big 4 firm on the list. To determine the Best Workplaces for Women, Fortune research […]