Back in August, the PCAOB issued a concept release on audit firm rotation and invited anyone who had the time and/or energy to comment on it (as did we). In the wonky little corners of the accounting blogosphere, there was strong opposition to rotation from Jim Peterson and Francine McKenna (although their reasons differ from your employers'), Tom Selling was lukewarm on the idea and Dave Albrecht has changed his mind (he was against before and is in favor now) on the issue, purely on political grounds. Not sure where the Grumpies were on this one, but they never addressed the issue explicitly, other than the audit model needs to change.

I stumbled across this little document from Ernst & Young that compiles some stats on the 600+ letters received by the Board during the comment period and they found that 94% of the letters were against auditor rotation. Ouch. What's interesting is that the majority of the letters come from "preparers/issuers" and "audit committee members." Refer to this nice little chart that is in the E&Y document: 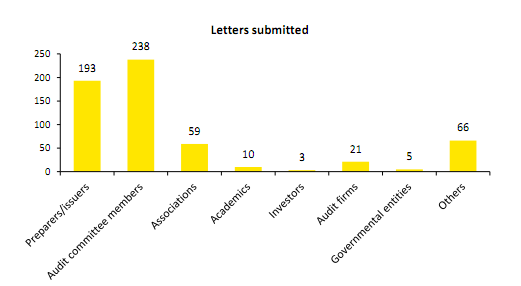 E&Y doesn't quote any letters directly, simply summarizing the concerns, which are completely predictable: increased costs, loss of industry knowledge (not exactly measurable) decreased audit quality (ditto); audit committees should be responsible for appointments (gee, any guess who thinks this?), etc. One interesting (read: depressing) thing of note is that investors represent less than 1% of the letters submitted. What's also interesting is that CFOs are not split out separately (probably slammed in with "issuers") in this chart even though they submitted 16% of all the letters. By and large, CFOs hate auditor rotation too, with the exception of Apple (a big exception).

The letter states that E&Y is also opposed to auditor rotation, which doesn't come as a surprise, and I'll get you a hot date with Adrienne if any of the audit firms are actually in favor of rotation.

We asked the Board about the document and we're patiently waiting for their response. UPDATE: They're going with "no comment."

So, is rotation really that bad of an idea or is this nearly unanimous opposition a sign of good policy? I know that sounds weird but we're talking about DC here. Pissing everyone off is usually a sign that you're on to something.