Latest
Former and Current Alliantgroup Employees Speak Out About ‘Evil, Toxic, Emotionally Damaging Company’ Which Big 4 Firm Had the Most Elijah Watt Sells Award Winners in 2021? The IRS Is Paying an Unwelcome Visit to Alliantgroup (UPDATE) Alliantgroup Responds; Employees Returned to Work on Tuesday Are You Future-Ready? Learn How to Get There at This PICPA Event Friday Footnotes: Which Firm Puts in the Most Hours?; Clients Pay for the Talent War; Spotting Burnout | 5.20.22

Earlier this month, the AICPA Women’s Initiatives Executive Committee (WIEC) issued its second CPA Firm Gender Study and its findings are not encouraging.

The survey found that partnership on average remains overwhelmingly male. The current survey shows little change from studies done in years past, which have typically found less than one-quarter of the partnership ranks made up of women.

That “overwhelmingly male” breakdown is 78%/22% for men and women. The survey drills down further by firm size: 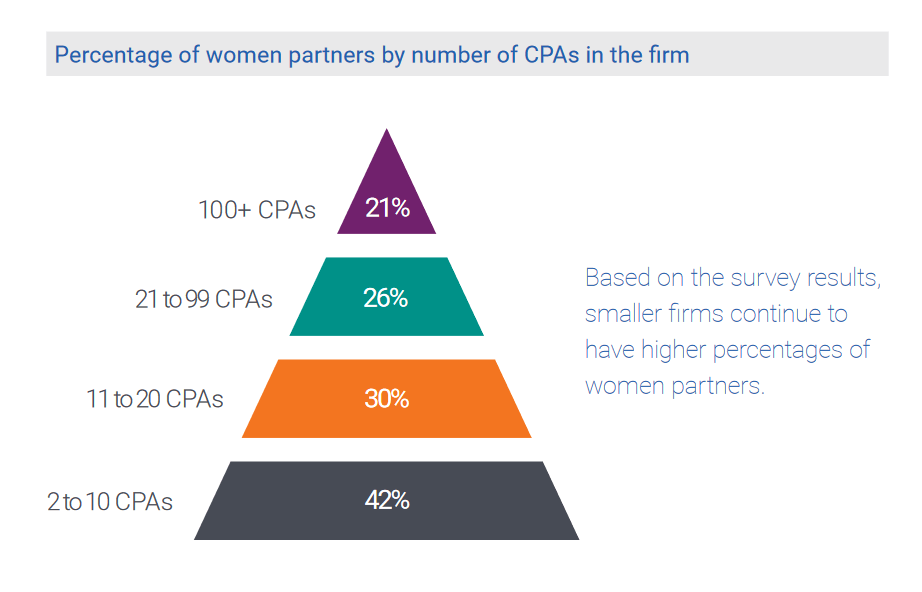 This does compare well to the previous survey in 2015:

Yes, you’re reading those numbers correctly; the numbers from 2017 are largely worse than those from 2015. These trends are even worse when you consider the disparity of equity partners within these firms as well: 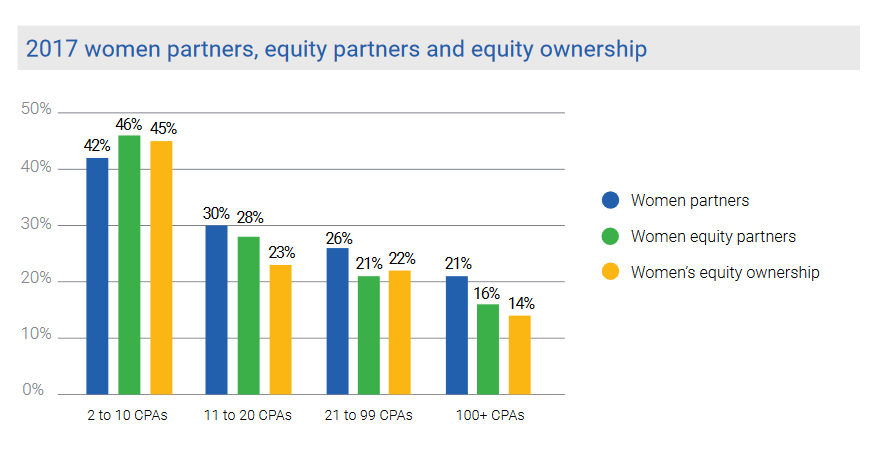 As you can see, and as the report states, the larger the firm, the greater the gap. Also of note, the survey cites another study, the PCPS/CPA.com National Management of an Accounting Practice (MAP) survey, that found that parity between men and women existed at nearly every level of a traditional firm, from associate to non-equity partner/director. However, that parity craters at the equity level. Perhaps in a few years, the numbers will start to spill over into the partner ranks, but nothing in the report suggests that’s what’s about to happen.

Gail Perry is a member of the WIEC and she says that while “there always seems to be disappointment that there aren’t more women partners,” she’s “not sure it is supposed to be equal” at the partner level. “Our society pressures men to be the breadwinners,” and “to fight for those leadership positions,” otherwise “they’re seen as failures,” she says. “The same pressure doesn’t exist for women.”

The pressure for women is different, however, most notably “to have it all” (even CEOs of Big 4 firms). This implies having a successful career of some measure, but also keeping family a high priority. When Dad misses a soccer game, no one bats an eye, but if Mom does, that’s when society considers her a failure.

Study after study has found that businesses perform better with more women in leadership positions. With a bigger pool of resources (i.e., including more women) the chances of success are that much greater. And yet the gender diversity — diversity, period — at the top of the accounting profession remains elusive.

Earlier: Here’s Another Lousy Stat on the Number of Women Partners in Accounting Firms

With the AICPA making filling the CPA pipeline one of their 2022 primary strategic initiatives (see page 11 of the 2021 AICPA Trends report for the full list of pipeline-filling activities they will be going hard on this year), I thought now might be a good time to dust off the ol’ 1980s D.A.R.E. programming […]