EY reports 2013 global revenues of US$25.8 billion [EY]
"This represents 7.7% growth over the previous financial year in local-currency terms, EY’s fastest growth since 2008. Revenues grew 5.8% in US dollar terms. All EY’s service lines and geographies continued to grow revenues and headcount despite uneven market conditions in many parts of the world." And here's a nice info graphic: 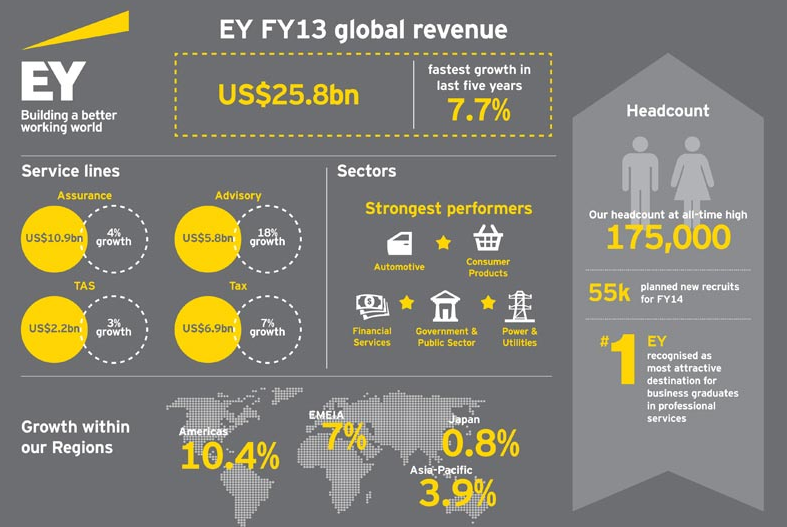 Ernst & Young Revenue Grows 5.8% [WSJ]
Ernst's growth trend held up relatively well compared with other major accounting firms that recently reported slowing growth. Last week, PricewaterhouseCoopers said its revenue was up 4% from the previous year when foreign-exchange rates are held constant—lower than the previous year's growth of 8%. Deloitte Touche Tohmatsu said in September that its fiscal 2013 revenue had grown 3.5% in U.S. dollars, below the previous year's 8.6% growth.

Shutdown Costs at $1.6 Billion With $160 Million Each Day [Bloomberg]
The shutdown cost $1.6 billion last week in lost economic output, according to IHS Inc. (IHS), a Lexington, Massachusetts-based global market-research firm. As the showdown enters its eighth day, the office closures are now draining an average of $160 million each workday from the $15.7 trillion economy.

SEC Looking into Accounting at ACS [Reuters]
Xerox Corp said the U.S. Securities and Exchange Commission is investigating certain accounting practices at Affiliated Computer Services, which it bought in 2010 for $5.5 billion. The investigation is focused on whether revenue from some ACS equipment resale deals should have been presented on a net rather than gross basis, primarily before the acquisition, Xerox said in a regulatory filing. Xerox moved into business services with its purchase of ACS, the company's biggest deal in its 106-year history. The company now gets more than half of its revenue from services.

Twitter's shady accounting [Fortune]
"It's like the employees are working for free."

Jury Clears PwC Of Giving Bad Advice To Skype Investor [Law360]
A California jury on Monday rejected an accounting malpractice suit against PricewaterhouseCoopers LLC, finding it did not give Skype Ltd. founding board member Mark Dyne bad advice that resulted in him having to pay $1.4 million in taxes when eBay Inc. bought Skype.

Sex Toy Company Offers Pleasurable Relief From The Government Shutdown [HP]
Vibrators.com is giving away as many as 200 sex toys daily to government employees during the shutdown. The promotion, which began last Friday, started slow, with 400 vibrators given away over the course of the weekend. On Monday, Vibrators.com turned up the speed, filling out orders of their daily stock of 200 toys before noon.