Here’s a roundup of some bad stuff accountants did or were accused of doing over the past week or so.

Auto shop accountant charged with stealing over $175K from employer [Chicago Sun-Times]
Rungnapa Correia is accused of stealing more than $175,000 from a Bensenville, IL, auto repair shop she used to work at as an accountant.

Correia, who was responsible for payroll at Yukikaze Auto, wrote unauthorized checks to herself, which were written out to cash and deposited into her personal account.

She allegedly stole the money between 2010 and June 2017, when the business closed.

Accountant stole $550K from KC hospital nonprofit, spent on shopping, travel, drugs [Kansas City Star]
Kathleen Frederico pleaded guilty on June 4 to embezzling more than $550,000 from a nonprofit that serves St. Luke’s Hospital. She was charged with one count of wire fraud.

Frederico was the accounting and special projects manager for the Saint Luke’s Foundation from May 1999 until she was terminated in February 2018. She admitted to conducting two fraudulent schemes. In the first scheme, Frederico created unauthorized checks made payable to herself. She entered a different payee into the ledger and created or falsified corresponding invoices to conceal the embezzlement. Evidence showed she stole at least $452,342 under this arrangement.

In the second scheme, Frederico created unauthorized checks in which the foundation paid her personal credit card bill and, on two occasions, a relative. She collected at least $105,333 using this method.

Frederico spent more than $150,000 of the stolen money on shopping and retail, more than $21,000 on internet drug purchases, and more than $30,0000 on travel. She also used it for mortgage payments and other living expenses, authorities said.

Authorities said the charges stem from a $550 million investment fraud scheme that operated from 2013 through September 2018.

Two other people have already pleaded guilty to charges related to the Ponzi scheme.

You can read the indictment here.

He was charged on June 4 with 10 counts of larceny over $1,200, two counts of false entry into corporate books, and one count of being a common and notorious thief in connection with the alleged embezzlement of over $1 million from the two separate employers.

Mallios began working for SVA Inc. in Framingham in 2011, and his employers determined he was creating checks payable to himself out of the business’s bank accounts. He is accused of embezzling more than $860,000 from SVA.

At the Child Health Center in Methuen, authorities said Mallios was making false entries into the business’s books, records, journals, and QuickBooks to cover up the theft. He is accused of stealing more than $470,000 from the child health center.

Hoboken accountant didn’t pay $914K of income tax: prosecutor [Patch]
Louis Picardo, an accountant based in Hoboken, NJ, admitted he failed to pay more than $914,000 in taxes due on income generated from his accounting firm and various rental properties he owned. 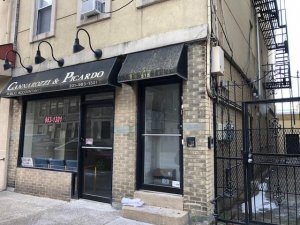 He pleaded guilty to one count of federal income tax evasion on June 5.

Picardo served as the tax collector in Hoboken between 1973 and 2008 and was a partner in Cannarozzi & Picardo LLC, a Hoboken-based accounting firm. He also was a member of multiple entities that managed both commercial and residential properties in Hudson County, NJ.

Picardo failed to report $3,725,853 in taxable income that he collected from Cannarozzi & Picardo and the entities on federal income tax returns he filed with the IRS for the tax years 2012 to 2015, resulting in a tax loss to the U.S. of $914,908, prosecutors said.

She also faces nine other charges: one count of criminal breach of trust and four counts each of forgery and using a forged document.

The fraud and breach of trust charges span a period from November 2013 through March 2018, when Stagg was fired.

Despite accounting firms changing their Twitter logos to rainbows for the month of June, a shocking number of LGBT accountants are straight up leaving the profession because they feel they don’t belong. This is very bad news considering how shallow the talent pool is to begin with. Thomson Reuters on IMA and CalCPA research: LGBTQ+ […]

Happy Monday! Here are your headlines. SOX turned 20 over the weekend. SEC Chair Gary Gensler had some things to say about Sarbanes-Oxley’s past, present, and future. Tim Ryan on leadership: “Too often, I find in corporate America, we go into the huddle where we agree on a pass play but not on what routes […]