As you may have heard, a dentist named Walter Palmer allegedly poached a lion named Cecil. The internet reacted negatively.

Now we have a big game hunter, an accountant named Sabrina Corgatelli, who posted images of herself with some of her kills from a hunting trip in South Africa. Again, the internet seems displeased: 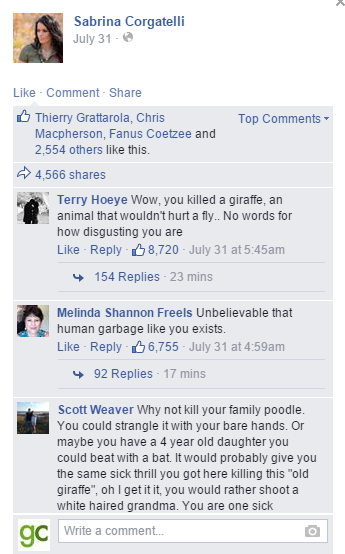 "To me it's not just killing an animal, it's the hunt,'' she told Carson Daly on TODAY Monday. "There's a lot of personal things in my life that have happened recently that have added to that. I won't get into that or disclose those feelings. Everybody just thinks we're cold-hearted killers, and it's not that. There is a connection with the animal, and just because we hunt them doesn't mean we don't have a respect for them. Giraffes are very dangerous animals. They could hurt you seriously very quickly."

Yeah, I've always thought Geoffrey from Toys 'R' Us was a bit of a creep.

But back to Sabrina. She's not backing down:

The posts detail her various kills during a hunting trip in South Africa's Kruger National Park, which also includes her posing with an impala, a wildebeest and a warthog. She seemed to taunt those outraged by the photos with a post that reads, "To all the haters, stay tuned, you're gonna have so much more to be p***ed about." She told Daly that she heard of the outrage over Cecil's death a day after she killed the giraffe.

If you're familiar with internet fury, you know that the next part of this story is when people start calling for the person's job. To wit:

Some of the commenters posted information about her job, leading to the question of whether she will face repercussions at work.

"Everything I've done here is legal, so how can you fault somebody because of their hobbies?" Corgatelli said. "How can an employer chastise you for something you do on your personal time that's legally done?"

Good point! Whether people want to develop an app for swingers, sift through trash for food or kill animals for sport, employers shouldn't punish their employees for legal hobbies.

HOWEVER! When your legal activities call attention to yourself and, as a result, make people so mad that you have to go on national TV to explain your actions, that becomes a bit of a problem. If it becomes big enough of a problem, then your employer can, and probably will, fire you.

In this case, Sabrina is a senior accountant for Idaho State University. So assuming: a) her bosses and university brass are okay with big game hunting; b) her bosses and university brass are cool with her going on the Today Show to talk about how she pissed off and then taunted a large number of people on the internet and c) no large university boosters are on the board of directors at PETA, this should all blow over soon enough.

With the EY cheating scandal making headlines even outside of our precious little accountosphere we decided to take a look at the full SEC order to answer the question — how and why were EY auditors cheating on CPE exams? This post will be long so we’ll get deeper into the CPA ethics portion of […]

There’s some new Deloitte research out this week and it is hi-lar-ious. It seems executives have absolutely no clue what their underlings are going through, mistakenly think they’re doing a good job of making said underlings think they care, oh and they too are stressed AF and thinking about quitting their jobs. Man, things are […]