Alright so twice now I’ve been called out for writing clickbait headlines now that the comment section is reopened, but whatever, what do you guys think I did in the years between getting laid off from this website last time and coming back? I WROTE CLICKBAIT. I’m not joking. One time I paid my rent on 15 ways Ariel Winter is turning into Kylie Jenner, zero shame. My questionable freelance decisions in the past aside, this isn’t new, we’ve been clickbaiting y’all for nine whole years, so stop acting like it’s something that we just started doing.

Now that that’s out of the way, this news actually deserves a clickbait headline because it does, in fact, shock. I’ma let CNBC do the shocking:

When researching internships, don’t just consider buzzy names such as Google and Facebook. According to career site WayUp, some of the best internships are being offered by companies that students might overlook.

For the second year in a row, WayUp has reviewed thousands of nominations from college students and recent grads to find out where interns from across the country report top experiences. Nearly 25,000 interns responded this year and their nominations were further analyzed by a panel of independent experts. These panelists reviewed programs based on diversity, uniqueness and the rate of hire after completing the program.

The 2018 Top 100 Internship Programs list included bold-faced names in tech and business, such as Google and Facebook. It also highlighted some companies most students and grads may not yet know, such as cryptocurrency startup Coinbase and established Fortune 500 companies, such as Gallagher, the insurer. The list’s top spot went to the internship program from KPMG, one of the “Big 4” audit, tax and advisory service firms which include Deloitte, PwC and EY.

OK, so the first problem here is how they frame it, like new grads considering an internship at Google or Facebook can just crash a Meet the Firms and be like, “Hey I heard y’all got internships” full Tyrone Biggums style. No. 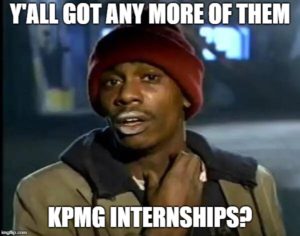 The article goes on to say that “KPMG earned its top distinction thanks to its high conversion rates and a program that allows interns to create their own internship and travel internationally.” Nary a mention of free steaks nor ice cream parties? This is some seriously bad reporting on CNBC’s part.

But look. Kangaroos! Elephants! Perfectly posed selfies on top of mountains! All of the things a reasonable person thinks of when thinking of public accounting internships.

Sending a special thanks to all our Global Interns working on international assignments in KPMG offices all over the world! Happy #NationalInternDay! @wayup #kpmgintern

This all feels very strange. Like the time some weird guy in Ed Snowden glasses cornered me outside of the San Francisco Public Library and offered me a free personality test. Next thing I knew, I was just a penstroke away from giving my life to Scientology. But hey, good for you, KPMG. It’s about time you score a win.

The Accounting News Roundup newsletter is back! Every Friday you’ll get a recap of recent content posted on Going Concern, On This Date in Going Concern History, list of hot remote and hybrid accounting jobs, and more. Sign up here today.

KPMG has some sponsored content in Harvard Business Review about how to keep employees from defecting (defecting? Really? It’s a job, not the Sandinistas) and in it, the firm offers some suggestions to encourage employee loyalty. Suggestions that they themselves would be wise to implement should KPMG want to hang on to their own people […]

PLUS: KPMG is accused in a lawsuit of “appalling” audit work that allowed a U.S.-listed Chinese biotechnology company to carry out a “brazen” $400 million accounting fraud. Ex-Hillandale Farms accountant admits to $6.8 million embezzlement scheme [Pittsburgh Post-Gazette] Jonathan Weston, the owner of Katie’s Kandy in Pittsburgh, admitted last month in federal court that he […]