Latest
Some Guy in Montana Thinks Audit Firms Are Corrupt, Untrustworthy Big 4 Firms Are Fighting Engineers Over the Right to Bill Clients For Climate Disclosure Audits Happy 4th of July and Also a Lesson in How Not to Be Compensation Watch ’22: Does the New Equation Add Up to Better Raises For PwC Employees? Friday Footnotes: XOXO, Accountants; PwC Wants Tax Cuts; KPMG Stacks Partners | 7.1.22

The partner at my first SEC gig was an “out of town” partner. He would fly in each Monday from DC and before you could say “happy hour,” our transient leader was back on his Thursday flight home.

Given we only had 3 interactions in 12 months, I knew very little about him except that he rode Harleys, liked bear hunting, and left his wife for a smoke show audit staff.

I always felt like our work dynamic was similar to those I used to read about in history books. Management versus the proletariat, you know, full blown Upton Sinclair shit. My $45K annual salary versus his over half a million, and the divide couldn’t have been clearer.

The final straw came when he told our group at a happy hour that he wished a Nickelback concert was coming to town. “Wouldn’t it be a great team event?”

It was then I swallowed the harsh reality of my own fate, this was “The Man” I had heard of all those years, and I was his bitch.

As you can tell I eventually left that position, and over time one thing has become vividly clear to me, Big 4 Accounting is an analog for everything that’s wrong with America.

The widening wealth gap of the top and bottom classes, the boondoggling, manipulative nature of the rich, the growing segregation of each social class. These all correlate to less dominate America on the international landscape, one ripe for cultural and economic shifts.

To validate my point I dug up some data on average growth rates for real GDP, consumption (found in the same link), and amount of wealth held by the top 10% for each decade going back to 1930. Here’s what I found: 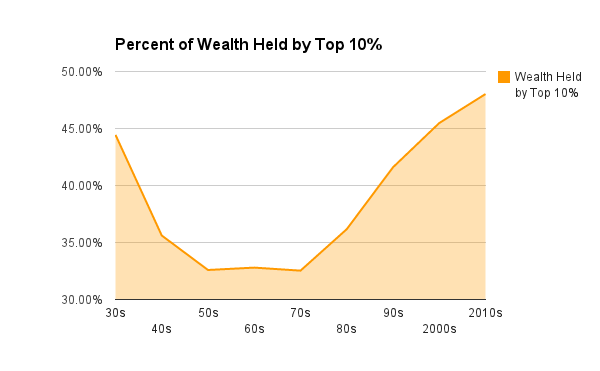 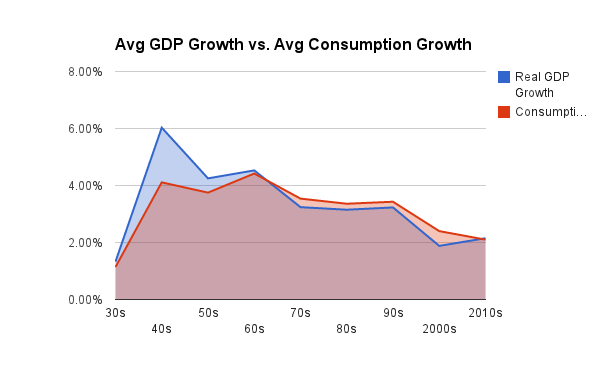 Clearly there’s a correlation between Real GDP and wealth distribution. In fact, the highest GDP growth occurs just at the time of the most severe drop in disparity. And with 70% of our economy consumer based, it’s not a surprise.

I know what you’re thinking, nothing says “don’t call it an economic comeback” like being the victor of an earth scorching world war. Yet you can see from the 70s on, the pattern seems to be repeating itself. Consumption and Real GDP are trending downward while wealth held by the top 10% has grown (somebody tell Obama to get the war machine up and running like its 1944).

Now let’s talk about why the same is happening in public accounting.

What’s the income split among Big 4 accountants you ask? Using a previous Going Concern article on public accounting compensation as a base, I’ve determined average wages to be the following:

Let’s use D&T as an example, they reported 4,981 partners, principals, and directors and 48,611 other professionals in their 2014 Facts & Figures, meaning PPDs represent about 9% of total professionals.

Now compound that scenario with the fact that over the last 20 years it has become increasingly difficult to make partner. A survey from the NYSSCPA declared the average time to make audit partner in 1991 was 11.7 years. In 2004, the average was 12.7 years. And a recent article here on GC revealed the average number of years to make partner has now shifted to 16 years.

This creates a recipe for pandemonium. The type of pandemonium you see in the eyes of your senior manager each and every day.

The biggest issue is the shrinking carrot amplifies the cultural issues Big 4 firms already have.

Increasing competition is good for individual performance but bad for groups and teams working towards a common goal. With the increase of staff to partner ratio the distaste for independent thinking will grow, stunting new ideas and innovation. And an already high (~20%) turnover rate will likely increase as more staff and managers find it difficult to see the light at the end of the tunnel.

Sound eerily similar to the banter found each evening on the news? It’s because both America and the Big 4 suffer from the same disease, comprised of massive institutions too bloated to move and too top heavy to change from within.

It will take an earth shattering, unforeseen event to move the needle and correct the path. Just like the war, the crash, and the Andersen sized scandal that came before.

Jim Elliott writes an opinion column for the widely-distributed Missoula Current (that’s a joke) and in today’s column he decided to address the EY cheating scandal. His familiarity with the ethics exam EY auditors cheated on begins and ends with a quick Google search but as an outsider to accounting and a member of the […]

Interesting piece over at the Wall Street Journal this morning about environmental disclosures or, more significantly, who gets to charge clients for auditing this data under SEC climate disclosure rules proposed in March. Read: Firms that verify businesses’ climate data are at odds over who is qualified to perform the work, a pivotal and potentially […]

Some Guy in Montana Thinks Audit Firms Are Corrupt, Untrustworthy