Please ensure Javascript is enabled for purposes of website accessibility
Latest
A Going Concern Special Investigative Report: Why Does NASBA’s CPA Merch Suck So Bad? Let’s Talk About Why ‘Musculoskeletal Issues’ Are on the Rise at This Accounting Firm Unable to Bill For It (Yet), PwC Australia Tells Staff They Can’t Use ChatGPT For Client Work Monday Morning Accounting News Brief: Auditor Demand; EYer Not Coming in on Monday; Reentering the Workforce | 2.6.23 Friday Footnotes: Know Your Value; Retired EY Partners Complain; ‘Rest For Success’ | 2.3.23
Ed. note: this is second in an ongoing series to help you make the most out of Excel setting-by-setting. If you have a specific Excel demon to slay, you can get in touch for our resident white knight and Excel-slayer David Ringstrom to help you out.
In Part 1 of this series I noted that most Excel users tend to use Excel in its default state. This is akin to time-traveling back to the early 70’s—a world before stonewashed jeans when we endured board-stiff Levi’s for a couple months until they broke-in. Been there, done that. Have a chuckle at my expense, and then realize that you’re likely doing the same thing in Excel.
In case you missed it, Part 1 details how to get to the options area in any desktop version of Excel. Go catch up, and then come back here for more tweaks. Today, as illustrated in Figure 1, I’ll focus on the Save section of Excel’s Options dialog box of the desktop versions of Excel: 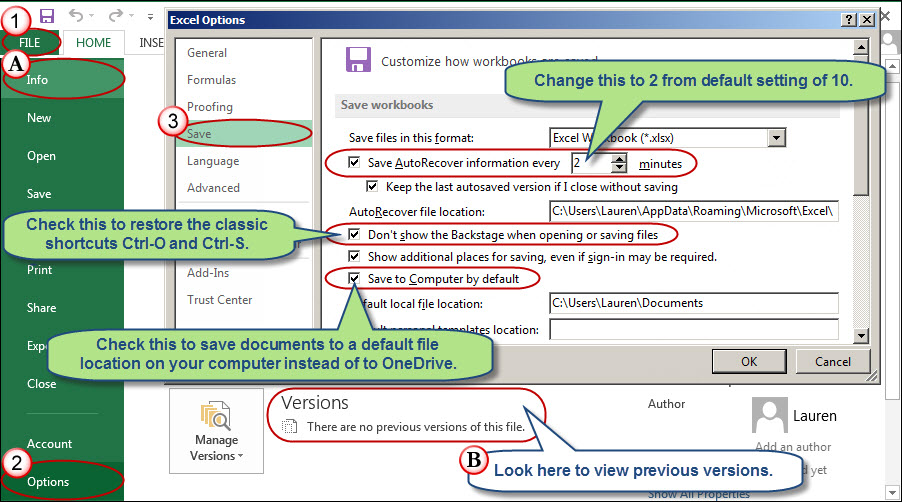 Figure 1: The Save section of Excel’s Options dialog box allows you to customize how you save your workbooks.
Save AutoRecover Information: This particular setting resides in the Save section of any Windows-based version of Excel.  Up through Excel 2007, it served as a means by which Excel might, maybe offer to recover what you were working on should the program crash. However, beginning with Excel 2010 this feature offers insurance against things going awry with almost any spreadsheet you may be working on.
As long as this option is enabled, Excel surreptitiously and periodically makes back-up copies of the active workbook you’re using. This is helpful in two ways:
So, with that background in mind, up your odds of success in Excel and change this setting to 2 minutes, down from its default setting of 10 minutes, as illustrated in Figure 1. You’ll want to do this even if your software dates back to the eighties. In the modern versions of Excel, you’ll have the recovery capabilities I described, while the antique versions of Excel will at least give you a better chance at recovering from a program crash.
Moving on, if you’re using Excel 2013 there are two new options that I recommend you adjust, as illustrated in Figure 1:
Finally, as noted in Part 1 of this series, in all versions of Excel I recommend that you change the Default File Location, or Default Local File Location as it’s referred to in Excel 2013. This typically defaults to the Documents folder on your C: drive, but should be changed to whatever location you use most for opening and saving documents. Thus, it might be the F:\ drive on your network, or in my case, my Dropbox folder on my C: drive—sorry, Microsoft, I’m just not into your OneDrive.
About the author:
David H. Ringstrom, CPA, heads up Accounting Advisors, Inc., an Atlanta-based software and database consulting firm providing training and consulting services nationwide. Contact David at [email protected] or follow him on Twitter. David speaks at conferences about Microsoft Excel, teaches webcasts for CPE Link, and writes freelance articles on Excel for AccountingWEB, Going Concern, et.al.

Hate to be the burster of bubbles for anyone out there excited to unload your work on ChatGPT but PwC Australia has told its people that for now, playing around with AI should happen strictly off the clock. Australian Financial Review reports that in this morning’s internal newsletter, PwCers were told not to feed client […]