Latest
Guy Compares the IRS to Barnes & Noble A Definitive List of Reasons to Stay to Manager at a Big 4 Firm in 2022 RIP Norah Bruther, EY Senior Associate Who Was Killed By Alleged Drunk Driver Former Deloitte CEO Is a Big Fan of ‘Smors’ Friday Footnotes: KPMG’s Idea of a Fun Summer; IRS Eats Their Homework; Downsized GT Downsizes | 5.13.22

Anyhoo, back to BDO. They’re no strangers to spectacularly bad PCAOB inspection reports, so this latest one — while bad even by their “standards” — should come as no shocker.

Of 24 BDO audits inspected by the PCAOB in 2016, 16 were found to have problems, and inspectors found almost 100 individual violations. I’m no mathlete as y’all know but that puts BDO’s audit deficiency rate at 67%. If this were college, BDO would barely eek through Audit 101 with a D+.

Now, there is just a tiny glimmer in this otherwise large, steaming pile of horsecrap. Believe it or not, 2016 wasn’t actually BDO’s worst audit year. Granted, it’s worse than the prior year’s 52%, but an improvement over 2014’s brutal 74%. So yay, golf clap for BDO I guess.

Controls testing continues to be a sticky subject for BDO, just as the PCAOB observed in prior years.

As is tradition in PCAOB inspection reports, the fuckiest audit gets top billing, and boy is Issuer A a drama-filled ride that spans eight pages. It includes (but is not limited to) dings for AS 1210: Using the Work of a Specialist, AS 2201: An Audit of Internal Control Over Financial Reporting That Is Integrated with An Audit of Financial Statements (15 times just for Issuer A), AS 2301: The Auditor’s Responses to the Risks of Material Misstatement, AS 2310: The Confirmation Process, AS 2315: Audit Sampling, and a gazillion more we’d be talking about all day if we listed them all. Issuer A wasn’t the only financial services client BDO struggled with, as 25% of the audits called out in the inspection report were also financial services companies. 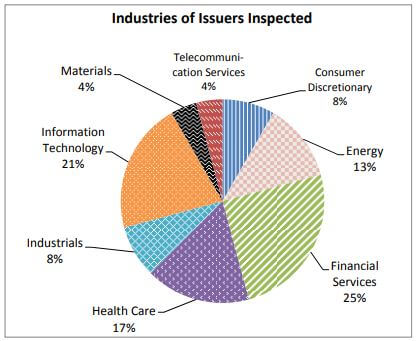 Issuer I is particularly funny, as BDO got called out for basically taking some dudes’ word on goodwill impairment:

The Firm selected for testing a control that included reviews of the issuer’s annual analysis of the possible impairment of goodwill. The Firm failed to sufficiently test this aspect of the control, as its procedures were limited to (1) obtaining the issuer’s impairment memorandum, (2) inquiring of the control owners, (3) obtaining an email as evidence that a review had occurred, and (4) attending a meeting in which the two reviewers discussed the approach for and results of the issuer’s annual goodwill impairment analysis. The Firm, however, failed to evaluate the nature of the procedures that the control owners performed to review the forecasts underlying the impairment analysis, including the criteria the control owners used to identify matters for follow up and whether those matters were appropriately resolved. (AS 2201.42 and .44)

I mean, if you can’t trust the client, who can you trust?

The issuer used forecasted revenue and forecasted earnings before interest, taxes, depreciation, and amortization (“EBITDA”) in its assessment of the possible impairment of goodwill for one of its reporting units. The issuer forecasted growth in both revenue and EBITDA despite having had declining revenue for this reporting unit over the previous several years. The Firm failed to sufficiently evaluate the reasonableness of the issuer’s forecasted revenue and EBITDA. Specifically, the Firm’s procedures to test these forecasts were limited to (1) reading the issuer’s impairment memorandum and related supporting schedules, (2) inquiring of management, (3) comparing the book value of the issuer’s net assets to its market capitalization, and (4) performing a sensitivity analysis that only assumed no growth in revenue or EBITDA and did not consider the possibility of continued declining revenue.

Dying to read more? Knock yourself out.

After doing a quick Google search, it looks like the PCAOB hasn’t punished a public accounting firm for failures in its audits of brokers and dealers since 2016. But top 25 firm Citrin Cooperman broke that drought yesterday after being fined $200,000 by a disappointed PCAOB for violating standards related to broker-dealer audits. And three […]

Alternate title: If You Are an Accounting Student, Expect to End Up In Audit When You Graduate Ever since early 2020 we have been forced to learn how to go without, not always an easy task in our always-connected, on-demand, two-day-delivery world. I don’t know about you but if I have to wait longer than […]