The last twelve months or so have been very good for the Purple Rose of Chicago. Let's recount a few highlights. They've been chasing dynamic clients around like fat kids chase ice cream trucks. Their solid work has been recognized by these dynamic clients. They were dismissed from a major shareholder lawsuit. At the behest of finance types everywhere, they launched a successful new ad and marketing campaign. They topped the Vault Accounting 50 and, probably most importantly, they FINALLY made their way into Connecticut. Yeah, it's Glastonbury but you know what? Connecticut wins.

Anyway, this type of a run had to come to end at some point. But, this. This is feels like sabotage. 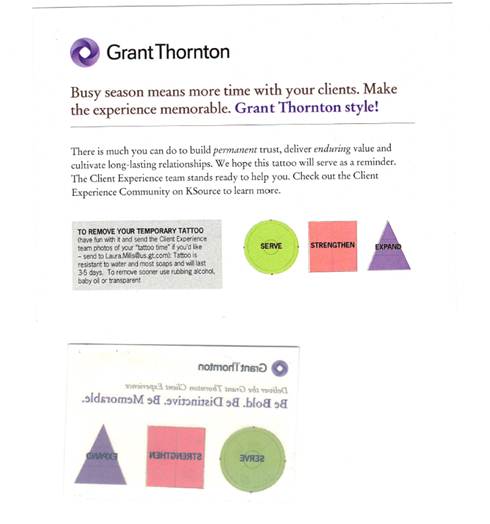 As you can see, there are three shapes and colors, along with some copy that says…oh, fuck it. It's backwards and WHO GIVES A SHIT. This is awful. AWFUL. I've got no idea how many people were involved with developing this idea but they all should be fired with extreme prejudice and then publically stoned with Nerf balls (nobody needs to die).

Consider: 1) Temporary tattoos should not be considered by anyone over the age of 10; 2) It's cold in most parts of the country, so long sleeves, trousers, tights/leggings are being worn by basically everyone. Where should GT employees put these tattoos? On their foreheads and the tops of their hands like some professional services mark of the beast? 3) Clients already talk about you behind your backs. This will make matters worse.

But back to the culprits responsible for this travesty. It stands to reason that someone in the GT marketing department got the idea in their grey matter that temp tattoos were hilarious and fun and not at all stupid. Someone (a younger member of the team, safe to say) recognized that this idea was up there with New Coke, the Going Concern redesign, and putting Sarah Palin on the GOP ticket in 2008. For personal and professional reasons that are not yet clear, this person had enough clout to get the votes that got this thing through. I mean, the only thing worse than a temporary Grant Thornton tattoo would be a permanent Grant Thornton tattoo. If only they had merged with Moss Adams, then everyone could have GranMA tattoos and that would be kind of nice. But alas, here we are. Temporary Grant Thornton tattoos. Yep.