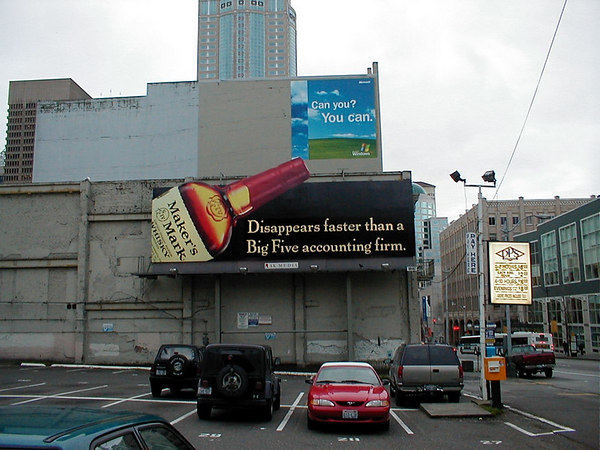 This billboard is a work of genius. Yes, Maker's Mark is a mass-produced bourbon, but in a pinch, it does go down easy.

The story behind this billboard is a little muddy but apparently, back in 2002 when this billboard appears, the AICPA was NOT amused by it and convinced Maker's Mark to pull it. Here's an old AccountingWEB post explaining what happened:

The Electronic Accountant [link redirects to Accounting Today] is reporting that the Kentucky distillery Maker's Mark, has agreed to remove billboards depicting the troubles currently facing the accounting profession. The billboards, showing a bourbon bottle turned over on its side, read, "Disappears faster than a Big Five accounting firm."
The billboards appear in Colorado and several other states, and all of them will be removed, according to a spokesman from Maker's Mark. "It was an error," stated the spokesman, who claimed the decision to use the billboards was made while he was on vacation.

Geoff Pickard of the American Institute of Certified Public Accountants told the editor of Electronic Accountant that the billboards will be removed. "We talked with Maker's Mark through an emissary, and the company said it didn’t want to offend the [accounting] profession and was happy to take them all down."

Accountants? Thin-skinned? Knock me over with a feather.

I managed to find this post that says one billboard, "briefly hung over 85-South, […] Within days the text was backed out – no doubt by Anderson [sic] apologists."

I wrote an email to the AICPA to see what they know about this version of events and any other background but in the meantime, let's just appreciate this.

Image via CliftonLarsonAllen CLA has merged with New Jersey’s SobelCo (a firm we’ve heard only good things about) and produced the obligatory press release about the union. Shout out to Allan Koltin, the prenuptial counselor of accounting firm marriages, who helped with the deal. News release: Today, CLA (CliftonLarsonAllen LLP), the eighth largest accounting firm […]