Continuing with today's theme of tax violence, avoidance and straight up creepiness, here's a strange story from (where else) Cleveland:

A man paid to dress as the Statue of Liberty and promote a Brook Park tax business says City Councilman Tom Troyer shoved him Monday during a tussle over the business’ street side advertising.

The councilman denied the claims, but city officials forwarded the case to a Bay Village prosecutor who will determine whether witness accounts of assault, theft and robbery listed on a police report will lead to any charges.

Apparently Troyer is upset Liberty Tax keeps putting its stupid signs where they shouldn't be. When he went over there to rip the (illegally-placed) signs off public property, the Statue of Liberty guy — one John Ellis Jr. — approached him and started threating to kick Troyer's ass (at least according to Troyer):

“He kept getting in my face,” Troyer said. “He said he would kick my [expletive]. These things didn’t bother me. My goal was to get the signs down.”

Ellis tells a different story and of course, who are you going to trust, some politician or a guy dressed as the Statue of Liberty?

“He just started to take our signs,” Ellis said. “He took our flag. He pushed me and tried to hit me with the flagpole. Then he threw the stake at me that holds the flag in the ground.”

Dear God please tell me someone got this on video, I would kill to see this on YouTube.

So, at some point a witness ran into the Liberty Tax office to fetch the manager, who came out and saw Troyer stuffing a sign into his van while Ellis tried to take it back. She claims at that point, Troyer gave Lady Liberty a shove. 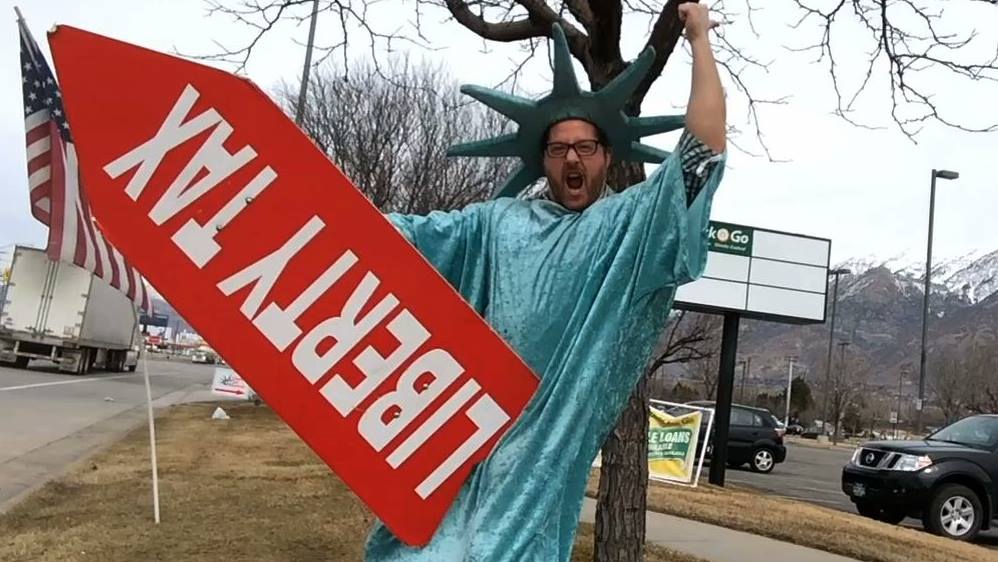 “If he’s a city councilman, he needs to act like one. You don’t just come up and take people’s signs,” Ellis was quoted as saying from his hospital bed. You see, after the incident, he had an asthma attack and spent two days in the hospital as a result.

In hindsight, Troyer admits he could have handled the whole thing better but he still hates those fucking signs, telling Cleveland.com “It’s frustrating to see people breaking the law…It just wears on me when I see these ugly signs out there. No good deed goes unpunished.”