Latest
KPMG and Fidal Won’t Be Going to Court In France Over Lawyer Poaching Friday Footnotes: EY CEO Has Ragerts; PwC Saves the Planet; KPMG Gives Up | 9.18.20 Deloitte Consulting Is Irresponsible, Lacks Integrity, and Is Unreliable, Says Accenture Congrats to Deloitte U.K. for Getting the Largest Fine Ever Handed Out by the Financial Reporting Council Layoff Watch ’20: KPMG Executive Assistants Were Given an Ultimatum This Week

Back in October, the PCAOB officially proposed that audit partners be required to slap their name on the audit report of clients that register with the SEC. For those inside the profession, this proposal isn't exactly popular, as that would put a specific name and a specific face with audit failures.  In other words, no one wants to be held personally accountable. I guess that's understandable. It's not like auditors are professionals with any kind of responsibility to the public or anything. REGARDLESS! Senator Carl Levin (D-MI) is a fan of the proposal for all sorts of reasons and sent a letter to the Board letting them know that he's got their back.

Not to worry, Carl has his reasons including, among others, improved audit quality and strengthened audit transparency: 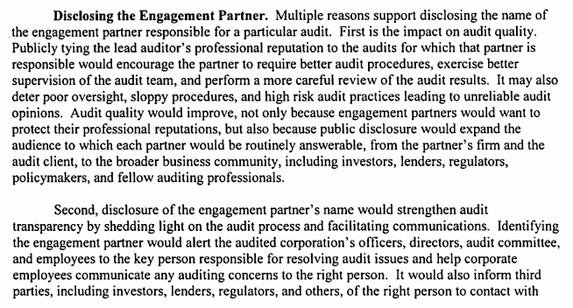 Carl would also like, while you're at it, for audit partners of all engagements to be submitted in the annual report to the PCAOB, something that isn't currently required. That's all. Oh! Actually is in favor of the proposal for "third party audit participants" to be named too. That's all.

A Manhattan federal court judge will decide next Wednesday whether former KPMG executive David Britt should spend some time inside a jail cell for his involvement in a scheme to steal secret audit inspection information from the PCAOB. But if Britt, former co-leader of KPMG’s Banking and Capital Markets Group, is sentenced to prison on […]

One thing that hasn’t slowed down too much during the Rona pandemic is the game of auditor musical chairs, as there were 51 new SEC audit client engagements and 62 departures in the second quarter among the 12 major global or national accounting firms compared to 57 new engagements and 68 departures in Q1, according […]