In these troubled times, it makes sense to pinch pennies whenever possible. I managed to find an oil change place to regularly give me half off on my $90+ synthetic oil only service just by being charming, personable and – presumably – a chick. Some of us clip coupons. Others haggle (you guys should be good at that). And still others dumpster dive. Whatever floats your boat, right? Well, unless it involves being a deceptive jerk.

A St. Louis accountant has allegedly been taking the cheap thing just a little too far by scamming unsuspecting restaurateurs in the area for free sandwiches. Yup, you read that right: free sandwiches.

They call him the Scamwich Artist and it seems he's been making the rounds, complaining about getting bad food in exchange for gift cards and, well, more food. See, on the rare occasion I have been subjected to bad food from an establishment, the very last thing I want to do is eat MORE of it but maybe that's just me.

So here's what apparently went down. In September, Sugarfire Smokehouse owner Mike Johnson got an unblocked call from a Mitchell Kerman, who claimed the restaurant screwed up his three grilled chicken sandwiches. After a brief back and forth in which Johnson questioned the claim considering Sugarfire doesn't sell chicken sandwiches nor actually own a grill, Kerman claimed it was turkey – which the joint does sell – and Johnson gave in. He told the guy to come back the following day for lunch so he could make everything better.

That evening, a couple of Johnson's fellow restaurant owner buddies came by to check out his hot new joint and overheard a convo between Johnson and his executive chef about the weird call. They interrupted and asked if the caller's name was Mitchell Kerman by chance. You see, he'd pulled the same stunt with them and, as with Johnson, forgot to *67.

The original Riverfront Times Gut Check story is too long and too weird to summarize for your short attention spans completely but let's just say Kerman had already been busted by one of the other restaurant owners on his second attempt to scam free food. He got away with a $25 gift card the first time.

So when Kerman arrived the following day to pick up his free sandwiches from Johnson, the jig was up:

Johnson met the man at the cash register and introduced himself. The man didn't seem eager to talk, so Johnson plowed right in. "Hey, I was talking to my friends at Roxane last night," he said, adding, "Has this ever happened to you before?"

At that the man cracked like an egg at an omelet-eating contest, fumbling for his wallet and throwing credit cards onto the counter.

Johnson instructed the chastened scammer to go back to any other restaurants he'd victimized to apologize and make restitution.

"Which he never did," Johnson notes.

Before ending the encounter, Johnson had one more task to complete. "I pushed him against the wall and I took his picture with my iPhone," the restaurateur says with glee, proudly proffering the digital shot.

Mike Johnson told Gut Check he was "just going to fuck with this guy for fun" so I guess there's no better way to accomplish that than ending up on Going Concern. Gut Check traced Kerman to a local St. Louis accounting firm and eventually got him on the phone. Kerman did not want to comment on the allegations and hung up on the paper's reporter. 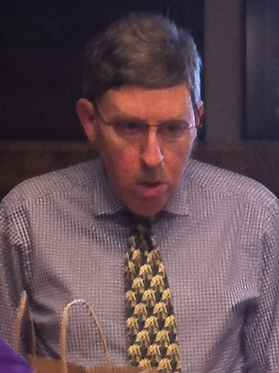 Making matters worse, Kerman apparently had the cojones to show up in a deli he'd previously scammed just ONE DAY after the Gut Check article was published and was confronted by the owner when he tried to pick up a carry-out order under the name "Mike":

"Are you going to pay for the burgers I gave you for free?"

He mumbled that he would.

"I expect you to tip my staff," she added.

Kwan tells Gut Check she couldn't resist one last twist of the knife.

Sounds like the interns are going to have to pick up lunch from here on out.

KPMG Vice Chair Greg Engel has been having trouble sleeping lately. It isn’t climate change or social justice or the price of eggs keeping him up at night, like most accounting leaders he is consumed by the talent shortage. No really, that’s what he told CFO Dive. Not to worry, Engel has hope. Hope that […]