Ed. note: Continuing with our potential Going Concern freelancer submissions, this is the second from Bob Loblaw. In case you missed his first, you can find it here.

So why do you care about this?

To ensure that I don’t lose my reputation as a condescending dick, I’ll start with this illustration of how companies make money:

Digging a little deeper in the context of a public accounting firm:

Expenses are much more complicated:

Net income is then distributed to the partners.

The part most of us care about is “employee compensation”.  The data you will get from an internet search for “Big 4 compensation” is expansive to say the least. In fact, JDA was peddling a study just the other day. (By the way, Robert Half has a free one that’s probably just as good) However, in order to get a good understanding of what the future holds in terms of non-partner compensation, you need to consider the factors from a firm point of view.

Remember what I said above the net income being distributed to partners?  Well the cold harsh truth is that the partners aren’t going to take a cut in their distribution.  This means that your revenues have to stay ahead of your costs.  Below is a summary of Big 4 revenue from 2007 – 2010:

2004 cumulative revenue was $60 billion so you’re looking at a CAGR of 8% from 2004 to 2010. Not too shabby considering the 2008 market collapse.  However, this is a study based on firm-reported operating results from a source called “Big4.com”. I’m not suggesting that firms are misrepresenting their operating results, but accounting firms are private companies and can report whatever they want, and if anyone knows how to make bad numbers look good, it’s a bunch of accountants. So in an abundance of caution, let’s look at a third party study.

In 2010, Audit Analytics completed a seven year analysis of audit and non-audit fees based on a comprehensive review of proxy fee disclosures for accelerated filers. What’s interesting about this study is that they compare audit firm fees as a percentage of the filer’s total revenue which gives you a sense of how fee growth compares with the public company growth.  The information below tells us that if anything, public companies are reducing the fees that they are paying public accounting firms: 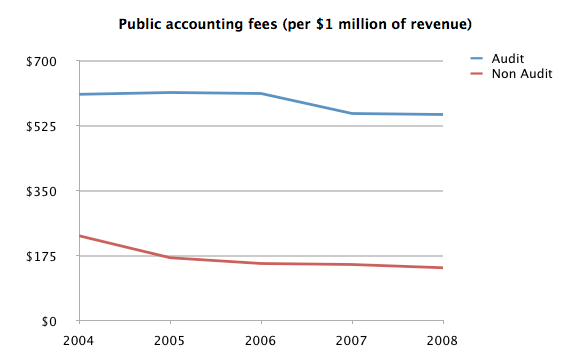 Now put this in context of what I opened up with. Audit effort has increased significantly over the past 10 years as a result of legislation, litigation, fraud, global credit market instability and a variety of other factors. What the chart above tells us is that the economic impact of this additional audit effort is not being passed along to the customers. So how are the partners still getting their distribution?  Well this is where it gets good.

Before 2004, there used to be this thing called busy season.  In January every year we got an e-mail from management that said we were required to work at least 55 hours per week and we all said goodbye to our families and put our noses down until the end of March. Then in 2002 a couple of jackasses named Paul Sarbanes and Michael Oxley sponsored a debacle of a bill which would become the Sarbanes-Oxley Act of 2002. The Act reflected the fact that both of these Congressmen were life-long politicians and knew about as much about accounting as Ke$ha knows about nuclear physics. Our clients were quick to point out that they would not be covering the entire costs of this new legislation. And so it began… the auditing requirements grew by a lot, and the fees grew by a little. Before long, the concept of “busy season” was forgotten as most service professionals were working 55 hour weeks year around. Then in 2008, the proverbial shit really hit the fan with the global credit crisis hit and clients started cutting out any sort of non-required services.   And yet, it appears that global Big 4 headcount didn’t significantly move.

As the firms continue their efforts to keep revenue growth ahead of audit effort, they are walking a tightrope, balancing between reducing compensation adjustments and managing headcount. Unfortunately for the firms, the private industry money is starting to get too good to pass up. I’ve known at least three people who more than doubled their annual take home by leaving the Big 4. One of them is me, so I’m pretty sure it’s not just a rumor. Using the “managing headcount” option, the firms are running out hours they can ask professionals to work, i.e. – there are only 24 hours in a day. So if revenues growth is declining, and expenses are increasing, what are the other options?