One of my connections on LinkedIn shared this post from Andriy Tretyak last week. Tretyak is the forensic leader at PwC Ukraine, and the photo above is the building where he lived in Kyiv, which was struck by a Russian missile. Fortunately Tretyak was able to escape before the missile slammed into the residential building, writing that “[an] air attack warning and outside shelter luckily saved me from the straight missile shot.”

Here is a screenshot of what Tretyak wrote on LinkedIn. A 29-second video recording of the damage accompanies his post: 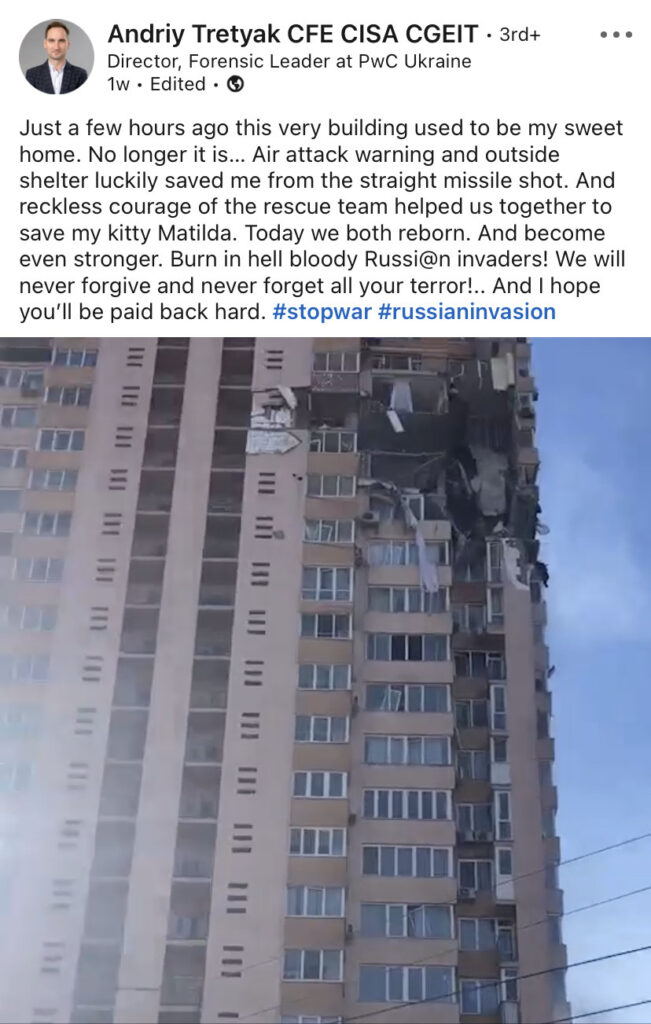 In another post on LinkedIn last Thursday, Tretyak wrote that PwC Russia “keeps numb and silent” about Russia’s invasion of Ukraine and is a firm “where a number of my fellow Ukrainians work, the colleagues with whom we used to cooperate on multiple projects and initiatives, the people with whom we used to have lots of fun.”

He asked his PwC colleagues and the firm’s leadership in Russia to “go out loud and stand up together with all of us to help protect and safeguard our freedom and democracy from the #Russianaggression—for the sake of #Ukraine, #Russia, the #EU and the whole civilized World. Together we’ll stop this war and emerge even stronger as never before. Get the urge to raise your voice and break the chains of this #Russianterror.”

PwC yesterday announced its firm in Russia was leaving the PwC network. That was followed later Sunday and today by KPMG, EY, and Deloitte also saying they were divorcing themselves from their affiliates in Russia. Tretyak said on LinkedIn that PwC pulling out of Russia was a “truly brave and right step demonstrating our firm’s values and purpose in action and supporting freedom and democracy” and added that he hoped PwC would also end its affiliation with its firm in Belarus. While PwC’s official statement doesn’t mention Belarus, the Financial Times reported yesterday that PwC Belarus was also leaving the firm’s network.

Tretyak continued: “Now it’s crucial to keep focusing as much as we can on helping the people of Ukraine (including PwC employees/partners) and other peoples of the planet who have been devastated by this Russian terrorist war (supported by Belarus).”

Reports: PwC Is Withdrawing From Russia and Belarus

What kind of monster does this?! That very edition — published in 2008 — is going for $50 used on Amazon and people have left reviews for it as recently as last year. This find could be a score for the right person! Is leaving accounting textbooks a nefarious plot to scare even more people […]