Maybe you've noticed, maybe you haven't, but PCAOB inspection reports have loads more information in them than they used to. They have several tables that summarize deficiencies by audit standards, financial statement accounts/audit areas and industry.

They also throw in pie charts to show the breakdown of the industries and revenues ranges of the companies whose audits were selected for inspection. The new and improved inspection reports aren't quite the page-turners like, say, your average dishwasher installation manual, but it would be remiss of me to not remark on how marginally more enjoyable they are to read than they've been in the past.

Now, then. EY's 2014 inspection report is not good. It's not as not good as last year, and it's not as not good as the year before that, but it's not good. It might be fair to say that the Black and Yellow still doesn't quite get auditing, or perhaps it's more accurate to say that they don't quite get auditing the way the PCAOB thinks they should get auditing. I invite you to go read the entire inspection report if you've been having trouble sleeping, if you just popped an Adderall or if you genuinely care about the results.

For those of you looking for the quick and dirty, a couple of the aforementioned tables should suffice.

Holy shnikies, that's a lot of AS5. And, for whatever reason, auditing revenue seems difficult.

Couple that with this table (only the top third, it stretches on for two pages) that shows how many deficiencies, per issuer, per standard: 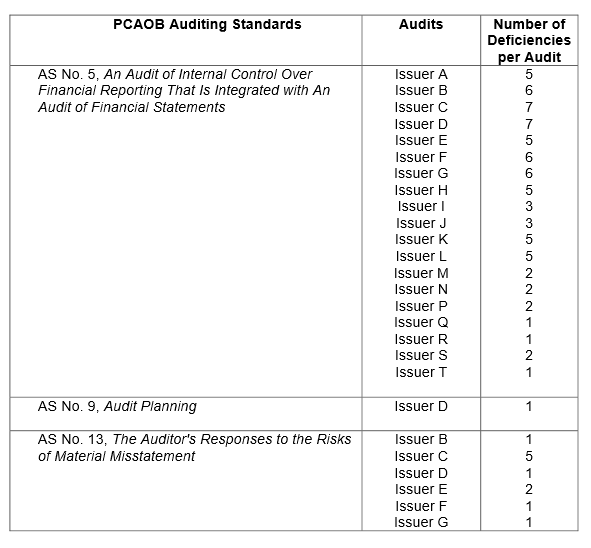 The report states that the number of audits with deficiencies was 20 out of a total of 56 audits inspected. However, as you can see, each issuer with a deficiency had multiple deficiencies per audit. If you look at the remainder of the second table, it appears that Issuers B, C and D had the most trouble.

EY Managing Partner Steve Howe and Vice Chair of Assurance Francis Mahoney responded to the report on behalf of the firm, saying, "We have thoroughly evaluated the matters described," and "have taken actions to address findings." Yes, it's verbatim to last year's response.