Grant Thornton is the most dynamic accounting firm known to man. Now, some of you might doubt this based on past revelations such as temp tatts, unoriginal taglines, and questionable advertising campaigns, but the following report out of the Belfast office will make you believe.

We all know accounting firm offices can be, er, less than creative. And we're all for injecting a little creativity in the otherwise droll world of accounting (unless you're talking about creativity with the numbers which, of course, is always universally frowned-upon) but GT's Belfast office has taken this concept way way too far.

Exhibit A, the Willy Wonka room: 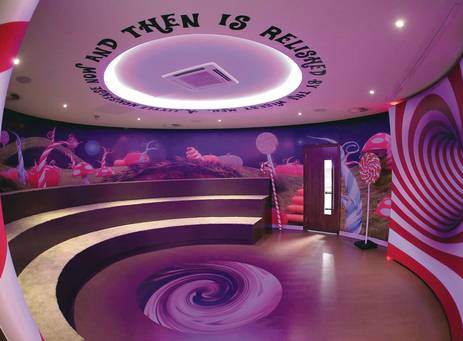 The quote on the ceiling, in case you're wondering, is "a little nonsense now and then is relished by the wisest men." While that quote may be true, nonsense in the form of a vomit-inducing spiral painted on the wall and ACTUAL FUCKING LOLLIPOP PROPS at the door of this alleged "meeting room" is more than just a little nonsense, more like a lot of ridiculous. What are we, five years old?

Exhibit B, the Wii room: 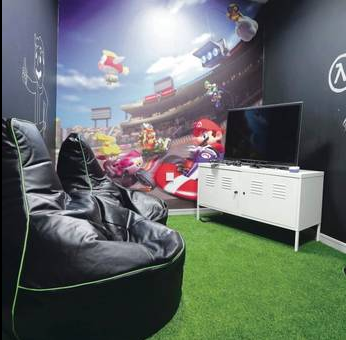 I wanted to hate on this room, I really did. From the repurposed locker to the silly Mario Kart mural that makes me think more "8 year old boy's bedroom" than "accounting firm I would want going anywhere near my company's financials" but the Vault Boy decal prevents me from going too hard on this. I will point out, however, that putting Vault Boy in the "Wii Room" makes about as much sense as Bob Moritz wearking a Phil Mickelson hat.

It doesn't end there. The office also features meeting rooms based on Harry Potter, Star Wars and Jurassic Park. What kind of dorks are they trying to attract?! And what happened to throwing up a can of sassy Ralph Lauren paint and installing a Red Bull machine to encourage creativity? I mean really.

On the first floor the Star Wars meeting room could have you believe you were aboard the Millennium Falcon by the time "any other business" was reached and that's before you've taken a seat in one of the pods surrounding the table in the Jurassic Park room.

On the top floor you could be forgiven for thinking traditional design ideas had been resumed with large leather arm chairs around a potentially roaring fire.

Closer inspection reveals it is based on the Harry Potter movies, right down to the potions in a glass cabinet and framed rules on the wall, all of which will make for interesting board meetings.

This all begs the question, are office chairs replaced with ride-on ponies? Does this office trade jeans Friday with footie pajama Tuesday? Do most Starbucks orders consist of hot chocolate?

The designer of the space explains her inspiration and really, I am amazed a professional would actually admit they designed this for adults:

Inspiration for my designs for the Grant Thornton office came from blockbuster movies – people are fascinated by movies and are in awe of what Universal and Disney can create, transporting people on a new discovery and away from the day-to-day stresses of modern day life.

Life along with work can be stressful and people can find it hard to gain a work life balance.

My design aim was to create an open functional office design for Grant Thornton people to work in, yet have unique meeting rooms where they could step away from their desks and feel they have been transported to a jungle when they are in the Jurassic Room or a Spaceship when in the Star Wars room, or magically appear in the Common Room at Hogwarts.

Anyone else remember that short story from Ray Bradbury's The Illustrated Man where the kids had an electronic nursery that would turn into whatever they wanted and when the parents wanted to turn the nursery off, the bratty kids ended up sending blood-thirsty lions to eat the parents? I can only hope this office eats itself in the same fashion.