Latest
Are Accounting Firms Really Sending 30% of Their Work Offshore? Returning to the Office? Don’t Get Fat! (Again) KPMG Poaches Someone From PwC and Issues a Press Release, Part XVII A Word on the Persistent Low Morale of the Audit Profession ICYMI: There Was an Excel All-Star Battle on ESPN

In the early days of the Rona pandemic just as most of you were starting to adjust to that work-from-home life (much to the chagrin of some of your employers that feel it’s not really working if you’re not chained to a desk where they can observe you), I shared a pic of my own WFH battlestation. Despite heavily suggesting that one should carve out a dedicated office space for their own sanity when working from home, I have no such thing myself, choosing instead to use my second bedroom as my PlayStation sanctuary and making wherever I plop down with my laptop my desk. Don’t judge, we all have our own coping mechanisms.

I’ve since upgraded to a Chromebook that I tote from room-to-room as needed, but here’s what my setup looked like back in March: 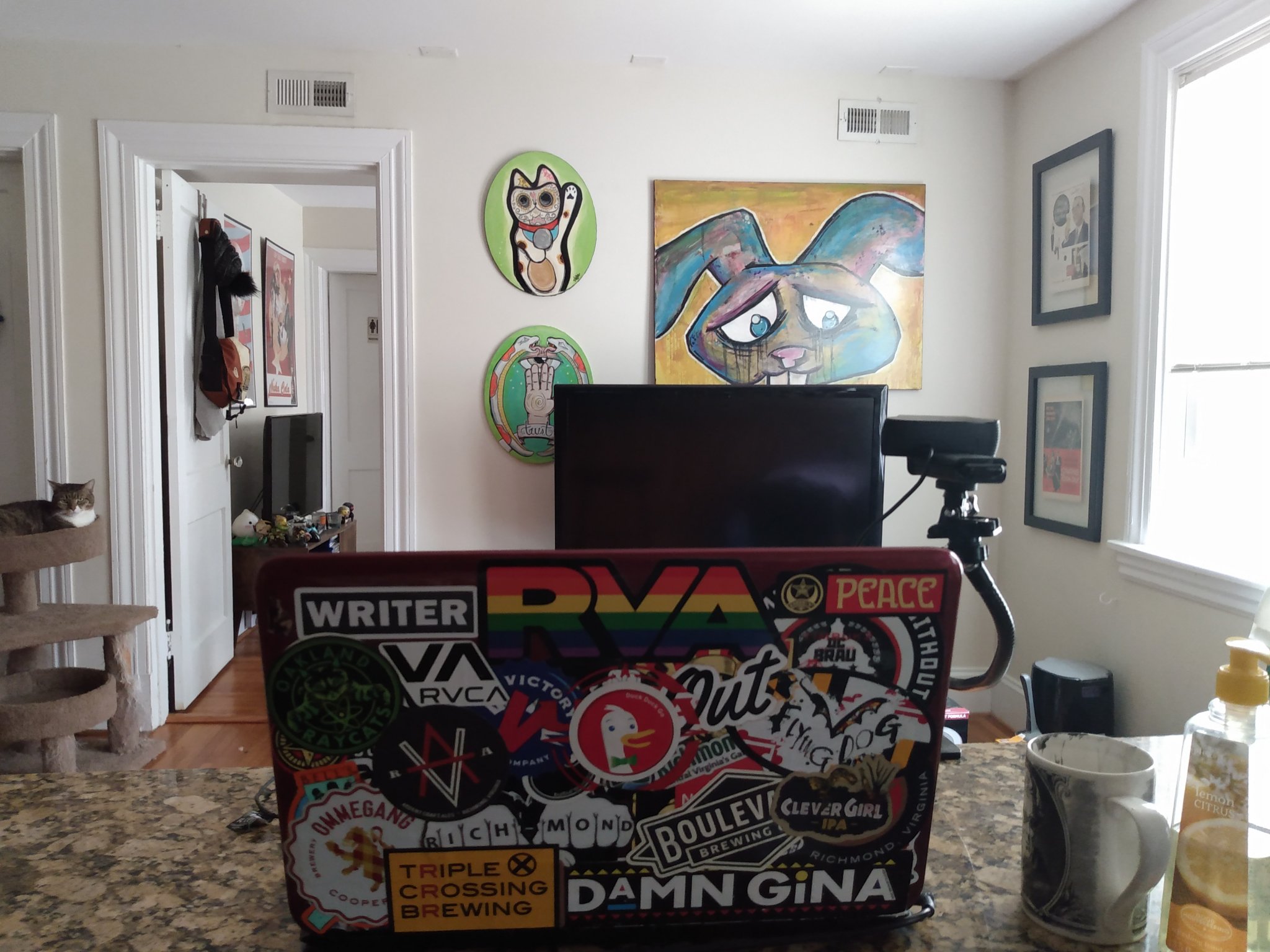 You’ll note the obnoxious HD webcam mount precariously hooked onto my kitchen counter. The main reason I have that is for TV interviews I do for my side project but also for work conference calls. You see, we’ve been Zooming long before Rona drove us all inside, it’s a weekly tradition around here (believe it or not, we actually discuss editorial shit, along with making fun of useless comments and planning the week ahead). So while everyone else started taking their meetings virtual, we were over here doing the same thing we’ve done as far back as I can remember. No biggie.

According to a recent Journal of Accountancy article, however, it seems all these Zoom meetings are a biggie. To some, anyway. Are you experiencing technostress?

Boomer Consulting’s Marc Staut had an entire session on “Managing Technostress” at AICPA’s ENGAGE 2020 conference recently, which ironically was held virtually this year because, well, you know why. So that’s a thing.

Technostress is not a new term. It has been around for decades since being identified in the mid-1980s during the personal computer revolution’s first wave as one of the main obstacles to using information technology productively.

Yeah, technostress to me back in the day was fending off the creepy old guys trying to cyber with me in chatrooms in the mid-’90s. That and hoping my homeroom teacher wouldn’t find out I installed warez on the one Internet-connected computer we had for the purposes of inflicting mayhem of unmentionable variety on school servers. Anyhoo, moving on.

Staut cited a survey from Springer Nature’s Education & Language division that defined technostress as “a modern disease of adaptation caused by an inability to cope with new computer technologies in a healthy manner.”

It’s not that people can’t handle computers, smartphones, and other technologies intended to make their jobs easier. The sticking point is their inability to use the computer in a healthy manner that properly balances their professional and personal responsibilities.

“We have to understand the impact of the technology and what we’re asking for it to do,” Staut said. “Then we can start to think about, ‘hey, are we really handling this in a way that is helpful, that is going to be beneficial for us. Or are we just holding on as the new technologies come flying at us?’”

Apparently it’s not just your computer in general that’s making you miserable. It’s also all those Zoom meetings, which our lizard brains aren’t quite adapted for.

“It is actually exhausting, more exhausting, to be watching what we call the Brady Bunch view, or all the different squares on a videoconference, than it is to actually be interacting with the same number of people in person,” Staut said. “You are trying to focus on each and every one of those boxes. So if there are 16 people on a videoconference, and you can see all of their faces at the same time, your brain is trying to read their body language, all at the same time, and it is exhausting.”

As cringe as the term “technostress” is, it kind of makes sense. I mean, we weren’t connected like this even a decade ago. And being connected this way at all is something that only happened in the last 20 or so years, meaning for us olds all of this is still “new” in the sense that we didn’t grow up with it and had to figure it out as we go. Even for the Zoomers — the generation, not video conference enthusiasts — among us who grew up with iPads in their hands, this is all strange and frankly overwhelming given how abruptly everyone had to adapt. No wonder we’re all so stressed out.

What’s the takeaway from this? Hell if I know. Clearly no one else does either, even if there is a corny term for it. Blah blah set boundaries blah blah disconnect blah blah. Kinda makes you pine for a time when the worst you had to deal with was pushy creepers wanting to cyber in a chatroom you could leave at any time, eh?

Why Zoom meetings really do leave you exhausted [Journal of Accountancy]

Creating the perfect mom/dad bod takes time. My dad bod developed after years of slouching in an office chair, ignoring exercise, and eating and drinking pretty much everything in sight. By the ripe-old age of 35, my once bulging biceps migrated to my backside and my powerful pecs placidly plunged to meet and merge with […]

Are Accounting Firms Really Sending 30% of Their Work Offshore?

Returning to the Office? Don’t Get Fat! (Again)

KPMG Poaches Someone From PwC and Issues a Press Release, Part XVII