It‘s been awhile since we paid attention to people leaving Grant Thornton for KPMG and vice versa, but this news that was made public yesterday is a biggie: well-known Grant Thornton Chief Economist Diane Swonk turned in her purple rose after more than four years with the firm and has joined the House of Klynveld in that same role. 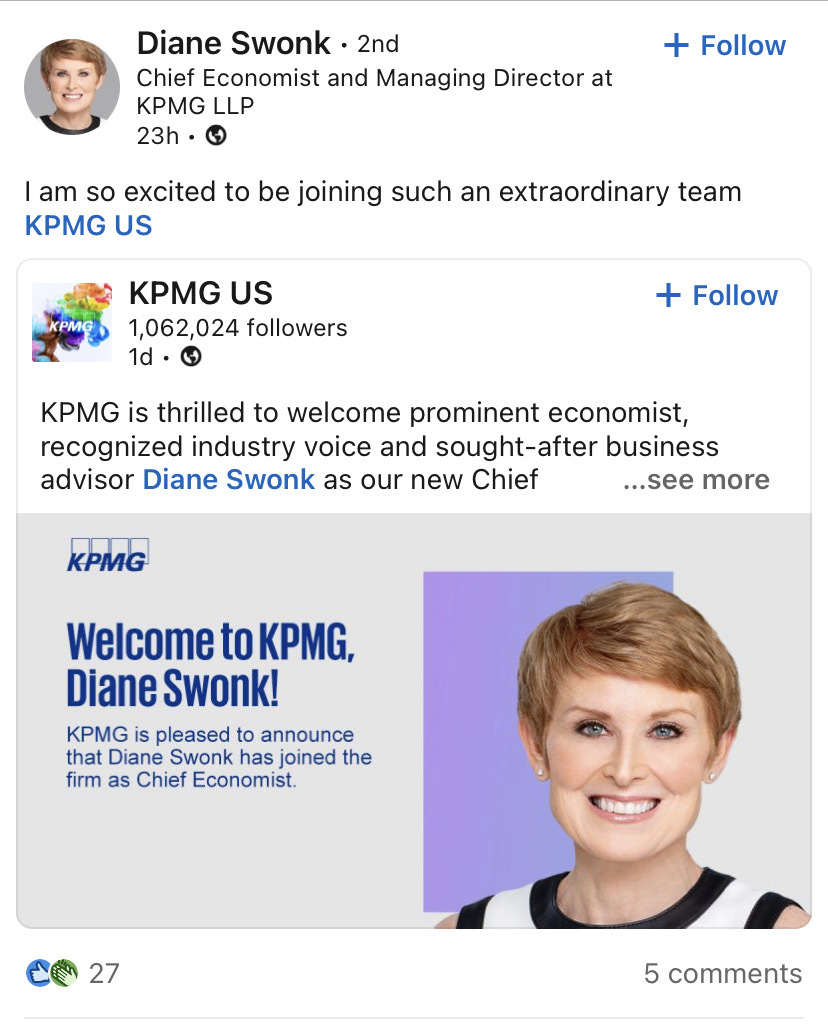 KPMG has named Diane Swonk – a prominent economist, recognized industry voice and sought-after business advisor – as Chief Economist. Swonk, based in Chicago, will lead the firm’s Office of the Chief Economist, which provides deep insights to clients on the economy and how it impacts strategy, growth and operations.

Swonk joins KPMG from Grant Thornton LLP, where she served as chief economist. She has more than three decades of experience in financial services and consulting and serves as an advisor to the Federal Reserve and its regional banks. Swonk also serves on the U.S. Chamber of Commerce economic advisory board and is a member of the Council on Foreign Relations.

Additionally, Swonk also advised the Council of Economic Advisers (CEA) for the White House under three presidents and served two terms on the Congressional Budget Office’s panel of economic advisors. She was named a fellow by the National Association for Business Economics for her outstanding contributions to the field of business economics and was named among the 100 most influential economists in the world for her analysis of the pandemic. She received a lifetime achievement award from the Association for Corporate Growth.

Diane is deeply committed to educational attainment and diversifying the ranks of leadership. She serves on the board of the Posse Foundation in Chicago, an education and leadership program. She works extensively with the Yale Dyslexia and Creative Institute. She just joined the Harris Policy School Council at the University of Chicago after serving for 15 years on the Council for Booth School of Business. She also serves on the board of the Foundation for the National Association for Business Economics (NABE); she serves on the statistics committee for NABE to promote the quality and integrity of U.S. economic data.

So why is GT’s chief economist leaving the firm such a big deal? Because no one has given Grant Thornton more exposure in print and on TV (other than maybe Rickie Fowler) than Swonk has the past several years. She has been a go-to source on anything economy-related for outlets such as The Washington Post, New York Times, USA Today, Fortune, Bloomberg, CNBC, MSNBC, Yahoo! Finance, ABC News, and others. And she’s bringing some friends from GT with her to KPMG:

I am off the sidelines and back.

We don’t know the reason why Swonk and the other economists are leaving Grant Thornton for KPMG, but rumor has it some people at GT are not thrilled with the upcoming change in leadership there. We’ll speculate that’s the reason for Swonk’s departure because speculation is fun!

What we do know is that Grant Thornton’s loss is KPMG’s gain.

Rumor: Is Some Culture Drama Going Down at Grant Thornton?