Another day, another EYer getting poached by KPMG. This time Marlon Richardson (pictured left) has departed the Ernstiverse to join the partnership at KPMG U.K.

The “big four” accountancy firm KPMG has appointed a former oil and gas partner at rival EY to its energy practice.

Marlon Richardson spent seven years at fellow professional services giant EY, and has been its advisory sector leader for the fossil fuels industry since 2018.

As a partner at KPMG he will be part of the Energy and Natural Resources Leadership Team, working to drive growth across the firm’s oil and gas portfolio.

He will also be tasked with supporting operating companies in the UK and internationally to diversify their portfolios to lower-carbon energy.

Mr Richardson will be London-based, but the role will also see him work out of the company’s Aberdeen offices.

Richardson spent about 12 years at EY after joining the firm as a consultant from Capgemini. He had been a partner at EY since 2014, according to his LinkedIn profile. In a post on LinkedIn before his new role with the House of Klynveld became official, he called working at EY a “memorable” and “colourful” experience: 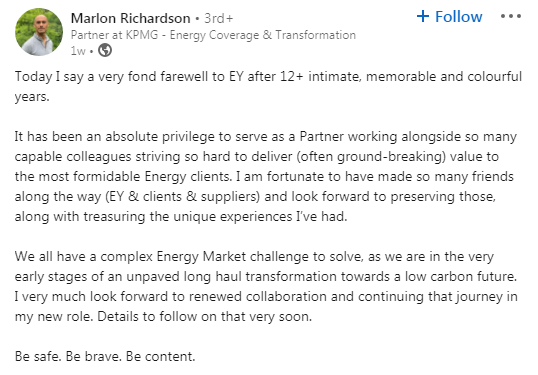 Richardson is very outdoorsy, listing mountain biking, surfing, trekking, and adventure racing as his favorite things to do outside of being a Big 4 partner. He also said he balances that outdoorsiness with “mind purges and yoga,” which he’ll need to do more than ever now that he’s joined the house of chaos that is KPMG U.K.