No new updates on the whereabouts of KPMG Dallas Managing Director James Alan White, who has been missing since Oct. 22.

One thing I haven’t seen in any of the reporting in Dallas and around the country about White’s disappearance is a comment from KPMG. Everyone outside of the Dallas office has to be aware of what happened, right?

Sure enough, a source from KPMG pointed us to a LinkedIn post about White’s disappearance from Dallas OMP Kim Kesler. We were told the post has been widely shared by firm leaders across the U.S.

KPMG is deeply concerned about our friend and colleague, Alan White, who went missing on October 22nd in Dallas. We are working with local authorities and in touch with Alan’s family to provide all the support that we can. We hope Alan will be found safe and well soon and our thoughts are with his family and loved ones. If you have any information that may help lead to his whereabouts, please call the Dallas Police Department at 214-671-4268 or the tip hotline at 800-403-8024.

It’s now been over a month since KPMG Managing Director James Alan White disappeared in Dallas after an early morning workout at an LA Fitness. Surveillance footage from a nearby RaceTrac gas station showed White putting gas in the Porsche Macan SUV he was driving after he left LA Fitness on Oct. 22. He then drove away, supposedly to head back home for a 7 a.m. work call. But he never made it home.

Dallas police found the black Porsche loaner car White was driving about a week later, but White is still nowhere to be found. According to an NBC News article that was published yesterday about White’s disappearance, the loaner car was found 10 to 15 miles away, in the opposite direction of White’s house.

A couple of new things have happened since the end of last week:

Nothing new to report today on the whereabouts of missing Dallas KPMG Managing Director James Alan White; however, his family released footage on Nov. 5 of White putting gas in the black Porsche Macan loaner car he was driving on the morning of his disappearance. White is seen at the gas station at 5:47 a.m. on Oct. 22, after he left an LA Fitness reportedly at 5:38 a.m. In the gas station surveillance camera footage, White is wearing a red tank top, even though the “missing person” flyer (below) says he was last seen wearing a light gray tank top with dark gym shorts.

White was last seen leaving LA fitness off Haskell at 5:38 that day. Now we know he got gas.

15k reward for info leading to his whereabouts. pic.twitter.com/hPUg8HI4pf

The family of missing KPMG Managing Director James Alan White has increased the reward from $10,000 to $15,000 for information leading to the Dallas man’s whereabouts. We included the most recent flyer with info about White and photos of him below. White was last seen leaving an LA Fitness in Dallas the morning of Oct. 22. Anyone with information about White’s disappearance should call (800) 403-8024 or Dallas police at (214) 671-4268.

Alan White, who works for KPMG in Dallas, hasn’t been seen by family and friends since Oct. 22, according to WFAA in Dallas. His family has hired a private investigator and is working with police to look into his disappearance.

A video camera captured Alan White leaving an LA Fitness on Haskell in Dallas at 5:38 a.m. He had gone there to work out.

Friends say that is the last time anyone saw or heard from him.

“And he was expected on a work call at 7 or 7:30 Thursday morning, so when he did not show up for that everybody instantly assumed that something had gone wrong,” friend Matt Davies said. 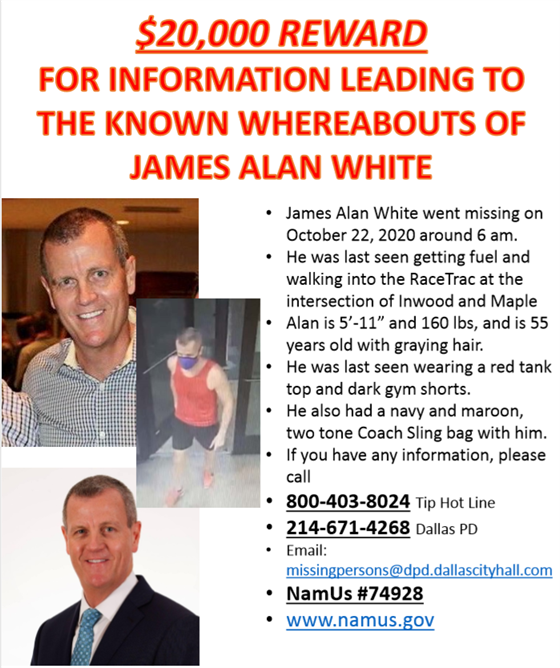 According to his LinkedIn profile, White was a managing director in the CIO Advisory practice of KPMG in Dallas, with a focus on cloud transformation services. He has worked at KPMG since February 2020.

White, 55, who is married, previously worked at Grant Thornton, IBM, and PwC.

According to WFAA, the family is working to obtain a court order to attempt to locate his cellphone.

[UPDATE] Dallas police said on Oct. 29 that they located and have in their possession the black Porsche Macan loaner car White was driving while his car was being serviced, WFAA reported yesterday. However, White is still missing.