Maybe it’s because the PCAOB had a new chairman and a whole new board at the beginning of last year. Or maybe it’s because the audit regulator’s longtime enforcement chief bolted last May and the position still hasn’t been permanently filled. Whatever the reason, the PCAOB settled only 13 enforcement actions against accountants in 2018, down 63% from the 35 actions settled in 2017, which was the most in PCAOB history, according to a new analysis from Cornerstone Research.

The 13 cases were the lowest amount settled by the PCAOB since 2013, when the regulator settled only 11 enforcement actions.

The SEC wasn’t much better in 2018, as it finalized 32 enforcement actions against accountants, 20% less than the 40 in the previous year.

Cornerstone Research said the decrease in SEC settled enforcement actions was due to there only being 16 actions brought against CPAs employed by SEC registrants, down from 27 in 2017 and the lowest number of actions in the past six years. However, actions against auditors and audit firms rose slightly, from 12 in 2017 to 14 in 2018.

But the SEC is showing signs of buckling down more on accountants and auditors, as the agency settled more cases in the second half of 2018 than in the first half. And the SEC is continuing to target individuals more than audit firms. In 2018, 24 of the 32 settled cases were against individuals, and in six cases, the respondents were both individuals and firms.

Two of those six cases involving individuals and firms were Crowe and BDO USA, which settled with the SEC as a result of their crappy auditing.

The PCAOB was stuck in an enforcement drought during the latter part of 2018, as there were no settled actions involving U.S. auditors or audit firms after Oct. 2., according to Cornerstone Research.

Seven of the 13 cases were settled against auditors and audit firms, which is down significantly from prior years, as this graph from Cornerstone Research shows: 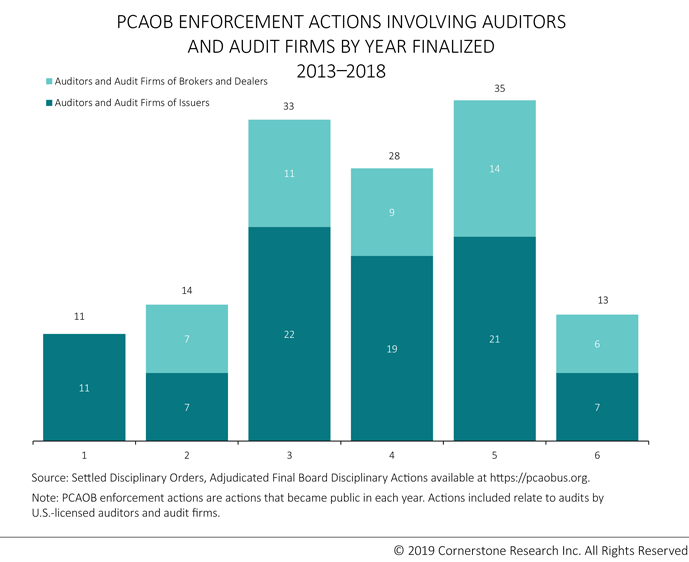 Deloitte & Touche was the biggest firm busted by the PCAOB last year for doing a lousy job auditing Jack Henry.

All told, monetary settlements in final SEC and PCAOB actions were levied against 32 of the 67 individual and audit firm respondents (48%), but totaled less than $3.3 million.

An article titled “PCAOB Inspections: Public Accounting Firms on Trial” describes the results from an academic study and survey about the effects on auditors who have been subject to PCAOB inspections. One of many good observations from that academic study is repeated below: Respondents collectively perceive that audit quality has improved as a result of […]

If Cleveland-based public accounting firm Cohen & Co. were an English Premier League goalkeeper, the firm would have gotten a clean sheet. Or if you’re not a fan of European soccer but like the NHL, Cohen & Co. would be like a goalie who finished the game with a shutout. In its 2019 PCAOB inspection […]