This isn't a breaking news story or anything but since our Google Alert for "Microsoft Excel" is filed in the same folder as "Lotus Notes," we sort of didn't get right on this story when it came out earlier this month. Thankfully most of you were drinking yourselves into a post-busy season coma and probably didn't even notice.

Harvard professors Carmen Reinhart and Kenneth Rogoff were recently forced to cop to a small spreadsheet error in their influential 2010 paper Growth in a Time of Debt — research that concluded countries running debt levels above 90% are screwed, basically. The idea is that high debt = slower economic growth compared to times when a country can keep its spending under control.

The actual error was only 0.3 percentage points off when the data was examined by Thomas Herndon, Michael Ash, and Robert Pollin, which is how the error was found out [PDF]:

"A coding error in the RR working spreadsheet entirely excludes five countries, Australia, Austria, Belgium, Canada, and Denmark, from the analysis. [Reinhart-Rogoff] averaged cells in lines 30 to 44 instead of lines 30 to 49…This spreadsheet error…is responsible for a -0.3 percentage-point error in RR's published average real GDP growth in the highest public debt/GDP category." 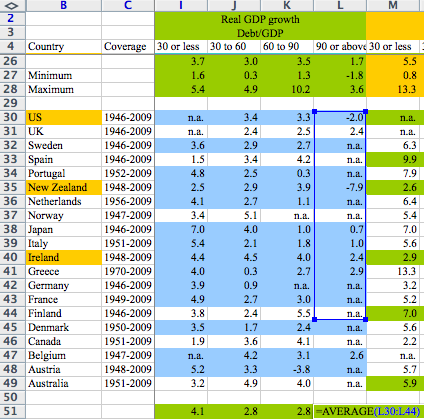 See, peer review isn't so bad after all. R & R didn't show their work until H, A & P were allowed access to their data.

But Excel's world-ending potential for errors doesn't end there, according to Fortune:

In the wake of last year's $6.2 billion JPMorgan Chase (JPM) trading loss, traders have been fired, top executives have been hauled in front of Congress, and the FBI, among other regulators, is investigating. But you know who really needs to be questioned? Bill Gates. According to an internal report on the trading loss released in February, the model that was supposed to monitor and limit the amount of risk the bank's London traders were taking was "operated through a series of Excel spreadsheets, which had to be completed manually, by a process of copying and pasting data from one spreadsheet to another." One key measure was added when it should have been averaged. The result: Risk officers at JPMorgan believed the credit derivatives bets were half as risky as they actually were. So, I guess, CEO Jamie Dimon can pass $3.1 billion off on Excel. The rest is still on him.

Fortune gives a ton more examples of Excel sheets gone wrong like MF Global's consultants telling the firm about a year before it blew up that it should improve its "end user computer tools such as Excel spreadsheets." Then there's Fannie Mae's $1.3 billion Excel "mistake" in their favor.

Garbage in, garbage out right? A spreadsheet is only as good as its jockey.